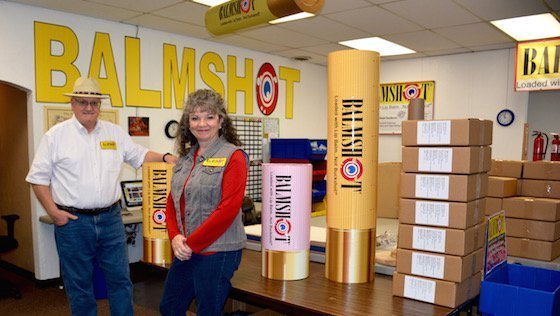 Wayne S. Forrey, community planner turned inventor and manufacturer, cranked out shotshell-encased lip balms so fast in his southwest Boise garage one winter that he considered moving a compressor into the house to keep it from seizing in the cold.

“We worked round the clock filling orders,” said Wayne’s wife Karen, who designs the products and displays when not working as a nurse navigator at a Boise hospital’s cancer treatment center. “That gave me confidence this product was going to go and that this could be a great little company.”

Balmshot, founded in 2010 as U.S. manufacturing employment sagged, is a steady performer. The company is rolling out its fifth balm and sixth product overall. More than 40 retailers including big chains carry Balmshot. The company, which employs a handful at 7646 W. Lemhi St., No. 5, Boise, has been consistently profitable for about two years.

Among early customers, McCall Drug was the first, Big 5 Sporting Goods was the first chain, and Bed Bath & Beyond was the biggest chain that took the least time to bring on board. The Forreys in late May 2012 bought a wedding gift at Bed Bath’s Meridian store, where Wayne casually showed him Balmshot.

“He thought, ‘This is really cool. I think we could sell it,’” Karen said. They were working with Bed Bath’s buying group by the first of August, which helped drive production to a level that maxed out production equipment.

The early 2013, month-too-late move from the family garage to the first of two sequentially larger office-warehouse spaces matched Wayne’s deliberate approach in building Balmshot. He spent time mastering assorted manual production and packaging steps before taking his own equipment and process designs to a local engineering firm for fine tuning.

His 30-plus years as a community planner came in handy. After working for infrastructure designers and engineers, homebuilders, municipalities, and the State of Idaho, it was fairly easy to complete documentation for planning and financing a business, protecting intellectual property, and finishing retailers’ approval processes—many of which took well over a year.

“I’m enjoying it. I really like being in the office and shop area,” Wayne said of his second career.

The balms look like 20-gauge shotgun shells. A special screw is placed where the shell’s primer would go, centered in the polished metal base. The top has the balm’s extra-tight cap where a shell’s pie-like exit folds would go. The lip balm’s firm- turning base—complete with a shell’s indented edge and raised rim—is designed so it won’t catch on the inside of your pants pocket, rotating balm up and out of the dispenser.

An all-natural, organic lip balm is the newest product. Others include a breath spray and two pink balms that direct a portion of sales to breast cancer screenings and diagnostic mammograms for women in need. Karen’s mother died of breast cancer and her sister has survived it long term. Wayne had lip reconstruction surgery following lip cancer in the early 1980s.

Unity in the Community

Grand Opening of The BLVD