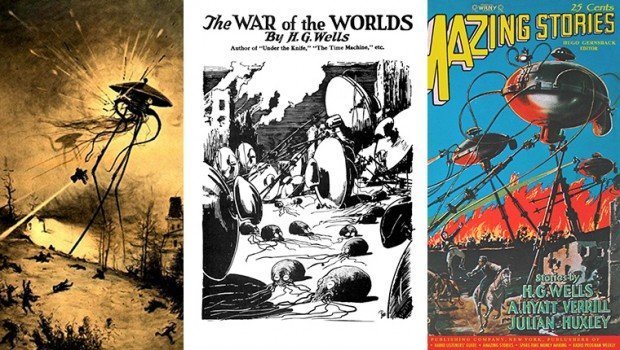 Did Boiseans Panic to News of a Martian Invasion?

October 30, 1938, was a cool, rainy Sunday in Boise. It was also the day before Halloween, a fact that might have raised suspicions about what took place that night. But as events unfolded rapidly, it must have been difficult to think clearly.

Radio listeners who had tuned in late to The Mercury Theatre on the Air would have been intrigued to hear a report that “several explosions of incandescent gas” had been observed on Mars. The broadcast then returned to a program of dance music, but was interrupted again by another announcement. Listeners should stand by for an interview with one Professor Pierson, a “noted astronomer” with the Princeton Observatory.

Shortly afterward commentator Carl Phillips began his interview with Pierson, who explained that while the chances of finding intelligent beings on Mars were a “thousand to one,” he could not account for the explosions.

At that point someone handed a message to Pierson. At 9:15 PM Eastern Standard Time, he read aloud, a seismograph had registered a “shock of almost earthquake intensity” near Princeton. The professor speculated that the shock was probably due to a meteorite of “unusual size” and dismissed its arrival as a “coincidence.”

What many listeners failed to note was that the director of The Mercury Theatre, a 23-year-old American named Orson Welles, was staging a dramatization of The War of the Worlds by British writer H.G. Wells. The novel was ideal for the director’s purposes, although he moved its setting from England to the east coast of the United States.

Even now, decades later, one sentence that Welles adapted from the novel’s opening stands out. “Across an immense ethereal gulf,” he intoned ominously, “minds that to our minds as ours are to the beasts in the jungle, intellects vast, cool and unsympathetic, regarded this earth with envious eyes and slowly and surely drew their plans against us.”

Of course if you had tuned in late, you would have missed the explanation. (And you would not have noticed that “Professor Pierson” sounded a lot like Orson Welles.) Some 40 minutes into the program there was a brief announcement identifying the dramatization for what it was, but by then there was plenty of cause for alarm.

It seems that a “huge, flaming object” had landed near Grover’s Mill, New Jersey, where Phillips had driven with Pierson. Half-buried in a pit was a “huge cylinder” that Pierson estimated to be about 30 yards in diameter. There was a crowd that the police couldn’t contain and a “curious humming” that seemed to come from inside the cylinder. Then there was a scraping sound.

The end of the cylinder was seen to be rotating, and listeners heard the clank of a huge piece of falling metal. Phillips then described “something wriggling out of the shadow like a gray snake.” There was a “humped shape,” a “jet of flame” that set everything afire. “It’s coming this way now,” Phillips announced breathlessly, “about 20 yards to my right—”

Phillips would not be heard from again, but an announcer brought on the commander of the New Jersey state militia to report that several counties in the area had been placed under martial law. There followed a series of self-assured comments from a Captain Lansing who described the scene as thousands of militiamen advanced on the cylinder. But then the captain’s voice turned anxious as he watched something “rearing up” out of the pit “on a sort of metal framework” and turning its heat ray upon the troops …

Here in Boise authorities were deluged with calls from worried residents. And no wonder. The program they were listening to was describing “one of the most startling defeats ever suffered by any army in modern times.” More of the mysterious cylinders had hit the earth! New York City was being evacuated as the Martians strode across the countryside in their monstrous tripods! Miraculously, Professor Pierson was back on the air, broadcasting from an empty house and wondering whether he might be the “last living man on earth.”

As the Idaho Statesman would report the next day, “hundreds of radio listeners in Boise and vicinity verged on hysteria.” Four of the paper’s reporters spent the hour of the broadcast trying to reassure frightened members of the public. One hysterical caller said that “hundreds of death machines” from Mars had “landed in New Jersey!” Another screamed, “They’ll be here in Boise by dawn!”

In Newark hundreds of men and women ran through the streets, their heads wrapped in towels to ward off the effects of the Martians’ poison gas. In Birmingham, Alabama, the pious gathered in groups to pray. Closer to home, in Concrete, Washington, the power went out during the broadcast. For a time, according to the Statesman, the town was “frantic.”

Unlike the Statesman, the Boise Capital News reported that radio’s “super-catastrophe” didn’t create a panic in Boise. “Those who were accustomed to listening intelligently and thoughtfully …enjoyed the program, went off to bed and untroubled sleep.”

It’s difficult now to determine who was right, but studies suggest that things weren’t as bad as the Statesman claimed. In Getting It Wrong, W. Joseph Campbell argues that “most listeners …were neither frightened nor unnerved.” Instead, the broadcast gave American newspapers an “irresistible opportunity” to rebuke the new medium of radio, which was competing with the papers for advertisers. Much the same relationship exists today between older media and the Internet.

Just as we can’t be sure of the extent of the “panic” that night, we can’t be sure of what expectations Welles may have had. But his sputtering Mercury Theatre got a new lease on life when Campbell’s Soup agreed to sponsor 13 more episodes—a lucky number indeed!