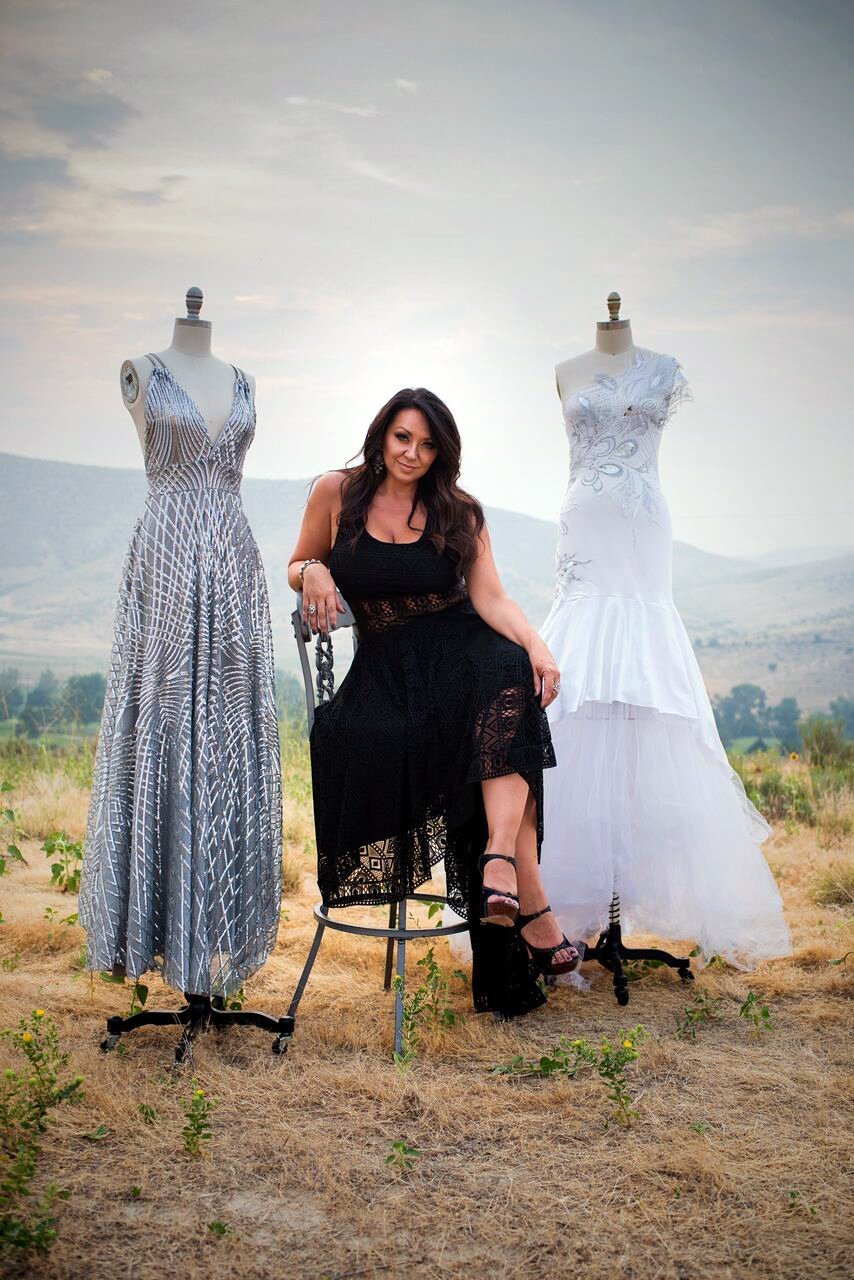 Flowy silhouettes, designed to hug and flatter curves that accentuate the real woman is how one would describe Meagan Jones’ fashion genius. From Rodeo Queen, IT specialist and rock star to fashion entrepreneur, this Rooney Mae Couture owner has filled every pair of these shoes with skills, talent and pizzazz. Jones’ adventurous spirit and philosophy that one should “never start believing that failure is an option” have been key to her journey.

Born and raised in Boise, Jones and her family lived out in rural Eagle and Star where it was easy to raise and groom show horses. Jones’ first taste of the fashion world began with her stint as a rodeo queen in high school. With her shapely body, she found it a challenge being a part of a pageant community that regularly sold clothes back and forth for the body type deemed to be the norm. Jones’ creative solution was to design and create unique outfits with the ‘bling’ for herself, which she eventually started selling to her friends.

Being an expert seamstress herself, Jones’ mother recognized her daughter’s incredible talent and strongly encouraged her to go to fashion school when she graduated from high school. Concluding then that, “Fashion is not a real job.  Nobody actually makes a living making clothes,” Jones traveled the long route to realizing that “Mother knows best.”

Instead, Jones moved to Seattle and then Phoenix pursuing the IT dream. Jones’ boss, a part-time stand up comic, recognized Jones’ gift for singing and, gave her a gentle nudge towards following this dream. Jones started singing and trying out for bands in 2003. With a passion for Texas country and Americana music, she moved to Austin in 2005 and then to Nashville to follow the music scene. Entering this phase of life brought Jones back to the world of fashion design. She wanted to design her own glitzy stage and party outfits. She gave life to sparkly, eye-catching pieces. Jones designed her stage garb to stand out and be flattering, but not require her to sweat buckets in order to look good.

For many years, Jones juggled music and fashion, accruing a lot of business on her Etsy website. In 2012, she finally realized that it was more lucrative to stay home and work than to go out on tours with the bands. She moved back home to Boise to work on fashion full time.

Jones reflected, “I feel like I have accomplished my music dreams. I have made several records. I have traveled through Europe singing. I love music. The lifestyle and being on the road? Not so much. It is glamorous when you’re 25. I don’t want to live on the road all the time. I have a normal life now and more control. I love to travel, but now it is for buying fabric. I’m happy with the journey I went on, because music and traveling contributed to what I do and having this freedom.”

For four years, Jones worked tirelessly out of her attic, which she says felt more like a “sweatshop.” She inched towards having her own storefront, which became a reality in September of 2015. While it was couture Victorian costumes that Jones started with, it was her signature flowy sundresses and wedding wear that grew her business tremendously on Etsy.

Jones has since expanded her range to include bridal gowns, bridesmaids’ dresses and prom dresses. What sets her apart is that she specializes in customizing outfits. Generally, many designers create a line like a spring line that comes with certain designs in specific sizes. However, Jones said, “My dresses are one-of-a-kind. While some summer dresses or bridesmaid dresses can be duplicated, you can be sure that my black tie event outfits and prom dresses are the only ones that exist.” It is also important to her that her dresses make clients “look good and take them through an event comfortably.” To that end, she ensures her creations are wrinkle-free and travel well.

Bright eyed about the future, Jones is excited to launch her new bridesmaids’ line within the next year, informed by the feedback she has gathered over the years about what bridesmaids truly want. Her new line will feature custom-made mix-and-match pieces. In making 500 dresses a year, Jones discovered customers yearned to mix and match tops, skirts and fabric designs, which is driving the current market.

Jones’ next goal is her swimwear line. She has been designing her own swimsuits for years and shared that, “Swimsuits are already difficult. Finding ones that fit well, look good and don’t make people feel uncomfortable is difficult.” In addition to her father’s help in the store, she looks forward to adding employees so she can focus on designing and creating her visions of beauty.

Jones’ journey has not been without trials and panic attacks. There have been times where she worried what would happen the next month. She has had to move three times with this business, tearing everything down and building it back up. Through it all, she has never given in to the fear that it may not work. Repeating the mantra, “It’s going to work, it has worked, it will continue to work” has taken her through challenging times.

To aspiring fashion entrepreneurs, Jones joked, “Go to fashion school if your mum tells you to!” And then, on a serious note, she advised, “If someone is really invested in your talent, go with it. Sometimes, we can’t see our own potential. I literally didn’t know what I was doing when I started, but now I have been my own boss for six years. I truly believe that what you think is what you create. Focus on success. Focus on a creative vision. Just don’t give up. It will happen. As long as people need dresses, I will be here to make them.”

For Boise Drummer Todd Chavez, the Beat Goes On

Ghostbusting at the Old Idaho Penitentiary