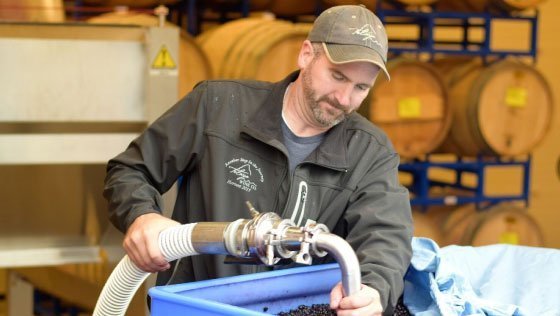 Success Has Been Cultivated by Earl Sullivan

Earl Sullivan has kept his motivation and determination at the same high mark its always been. From selling medical supplies to selling wine, his family, product, and work ethics all coincide with a successful business outlook.

At a young age, Sullivan always thought he wanted to be a doctor. He started in the medical field as a surgical assistant in a trauma center, which he described as his “favorite job.” Other positions Sullivan held include working for a medical device company, and also as COO of a pharmaceutical company. While within the pharmaceutical company, Sullivan was forced to be away from home for long periods of time, as did his wife who is a veterinary surgeon. Having to be out of town almost three hundred days a year, Sullivan and his wife decided that opening a winery would be fun, and also keep their family closer together.

Several years ago, Sullivan got involved in the non-profit entity called The CORE which focuses on developing a MedTech economy for the State of Idaho.  The organization works as a connector for companies like Proskriptive which develops a personal health care score for you based on analytics has been gratifying.  The work done at the CORE is about connecting various entities that exist or want to exist in Idaho with other resources so that the State can develop a core competency in MedTech. When asked if he was particularly proud of a specific project he worked on with The CORE, Sullivan said, “ I’m very proud of the MedBuild Conference we have created.” The conference will be held on November 9th this year with a number of national speakers discussing different medical solutions and problems.

As a member of the board for The CORE, Sullivan has a lot of responsibilities to make sure all the programs they are into run smoothly, like making sure strategic alignments with different companies get developed..

The stress involved with traveling and not being able to see his family with the job that revolved around the medical field had taken a toll on Sullivan after almost twenty years. In 2008, Sullivan decided to work at a winery and instantly fell in love. By 2011, Sullivan and his wife decided to actually start a winery. Their first winery was located in Garden City where the Cinder building now resides as a tenant of the space. They opened their new location in February of 2016 With the most polite workers, and a clean, organized work space, the Telaya winery exhibits Sullivan’s philosophies to the tee. With fiber glass walls that create a mold free environment and carpeting European ducting system in the wine cellar itself, the system Sullivan has created keeps the everyday cleaning jobs simple.

Sullivan’s passion for wine has always been a thing for him. Sullivan views wine just like he views life. When asked about the health benefits of wine Sullivan said, “Health is all about balance, if you drink a lot of alcohol it could be bad.” Sullivan applied the same idea to life as a whole and described a balanced life as, “knowing some days you’re going to have to work harder than others, and accepting that.”

Sullivan also adds balance to the product he produces. The grapes used at Telaya winery come from either Idaho or Washington, with about sixty percent coming from local Idaho farms, and the other forty percent from Washington. The grapes used in the wine are usually harvested between late August and early November. When asked what grapes grow best for the wine making in Idaho, Sullivan replied with, “Syrah.” Sullivan is very proud of his product. For example, instead of mixing in the “stems and seeds” of the wine, Telaya does a process called Delestage that removes these bitter components to ensure the taste, smell, and quality of the wine is not hindered by taking short cuts.

The wine at Telaya winery has seen multiple awards such as, The 2016 Idaho Winery of the Year, and also has awards for specific wine taste, like in 2012 when Sullivan’s Cabernet won a double platinum award. Sullivan and company don’t have any plans for extending their business outside of Idaho. When asked why Sullivan replied with, “we need to focus on our customers here.”

Hastings – The end of an Era