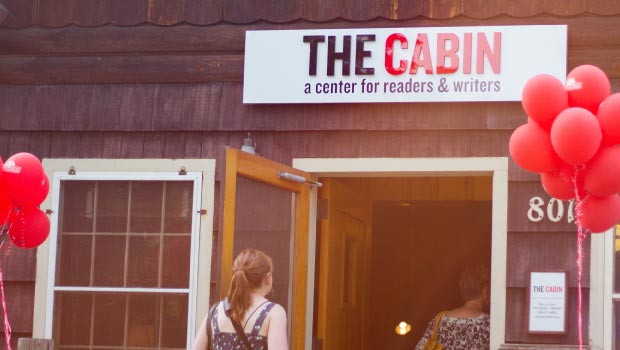 On a lazy August afternoon, a crowd of writers of every age gathered on the cool green lawn in front of the Cabin, a Boise landmark that provides a place for the city’s readers and writers, to celebrate the literary center’s twentieth anniversary. The event gave me an opportunity to reflect on what the Cabin has meant to me as a member and as a local author (I’ve been a part of the Cabin since 2008).

“The Cabin provides a space for readers and writers from children to centenarians,” said marketing director Jocelyn Robertson, when I asked her about what makes the Cabin so important to our community. “It’s a community of people who are united by the power of the written word.”

Cabin founder and first Board President Alan Minskoff, who chairs the journalism minor at College of Idaho and still teaches writing workshops at the Cabin, settled in Idaho after leaving is native New York in the 1970s. He wrote a highly regarded book about Idaho Wine Country that was nominated for Idaho Book of the Year in 2010. “The Cabin has exceeded the expectations of all of us involved in its founding,” he told the birthday celebration audience, which included past and present board members, Idaho writers, and college students. “Then, as now, the Cabin meets a number of needs. It satisfies artistic desires and fosters creativity.” Minskoff thanked the City of Boise for its ongoing support, observing that the twentieth anniversary marked a milestone of “gauzy imaginings transformed into one of the West’s most important literary centers.”

An important part of Minskoff’s initial vision for the Cabin was historic preservation. The eponymous cabin was originally designed as an Idaho State Forest Service office in 1940 and was part of Julia Davis Park. The spruce and pine structure, which sits adjacent to the main branch of the Boise Public Library, was added to the National Register of Historic Places in 1996 when the Log Cabin Literary Center was created.

The Cabin provides a wide range of literary opportunities to our community. One of its most recognized programs, Readings and Conversations, brings acclaimed authors to Boise to present at the Egyptian Theater, another historic landmark. This fall’s must-see event is Boise-based author and National Book Award winner Anthony Doerr in conversation with Jess Walter on October 6th. “Tony and Jess are going to write based on a prompt from one of our summer writing camp students,” Robertson told me. In November, the series will feature Daniel James Brown, author of Boys in the Boat. The spring will bring Roz Chast, George Saunders, and Jacqueline Woodson. Tickets can be purchased individually or as a series.

Other programs include drop-in writing workshops with New York Times bestselling author A.K. Turner and poet Danny Stewart, Happy Hour book clubs, and Writers in the Schools, which supports creative writing in 3rd-12th grade classrooms throughout the Treasure Valley. An annual publication, Writers in the Attic, showcases the work of local writers including Christian Winn.  In the summer, local authors lead writing workshops that help young writers to get to know our community. And the Cabin’s StoryFort coincides with the Treefort Music Festival in the spring (I was a StoryFort author last year).

Karen Baerlocher, current Cabin Board President, told me, “It’s exciting to see where the Cabin has come from and how it has stayed the course of its original mission. It’s an essential part of our community.” Rita Rodriguez, a Cabin founding member, author of The Blue Doorknob, and a friend, agreed: “We create a community of writers. My book would not have happened without the Cabin.”

A Healthy Boost for Boise