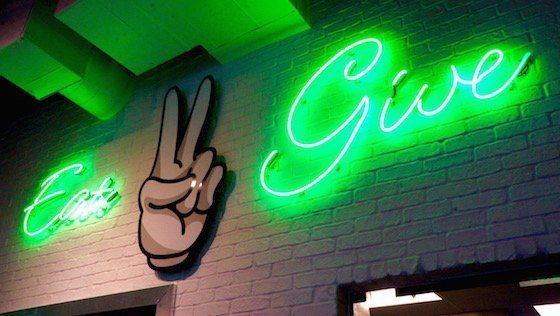 Even Stevens Sandwich Shop Gives Back to the Boise Community

What if you could enjoy a fresh, delicious sandwich or salad while listening to live local music on a patio overlooking Boise’s Freak Alley—and help solve the problem of hunger in our community? That’s the simple but counterintuitive concept behind Even Stevens, a “sandwich shop with a cause” located near the corner of 10th Street and Bannock.

For every sandwich that customers buy, the restaurant donates fresh sandwich ingredients to a local nonprofit. In Boise, recipients include the Idaho Food Bank, the Society of St. Vincent de Paul, the Boise Rescue Mission, and Corpus Christi House, a day shelter for people experiencing homelessness.

The 19th century rhyming phrase “even steven” describing fair and equal resource distribution provides an apt description for a restaurant that so generously shares its resources. When I stopped in for lunch one afternoon, General Manager Justin Zora shared his passion for the restaurant with me. Even with his extensive background in restaurant management, Zora had never heard of something so potentially life-changing.

“I was blown away,” he told me. “This was a tremendous opportunity to do something I love and make my kids proud while helping the community.”

As one example, Zora described how six members of his staff joined him at St. Vincent de Paul’s to serve a free community
meal to people experiencing food insecurity. “These were mothers and fathers, children and families,” he said, tears coming to his eyes. “All of us [at the restaurant] were so grateful that we could serve them. My staff really embraces the cause and wants to share.”

Even Stevens is the brain and love child of Steve Down, a lifelong entrepreneur. Best known for his Financially Fit financial education program, Down is a popular speaker and self-described “wealth coach” who definitely understands the importance of conscious capitalism. After learning that as many as one in six Americans and one in five children experiences food insecurity, Down and his wife Colleen decided to start a socially responsible for-profit business that could help to end hunger in their community.

The first Even Stevens opened its doors in Down’s hometown of Salt Lake City in June 2014. As of this writing, nearly 700,000 sandwiches have been donated to local organizations. While the restaurant industry is notoriously risky—nearly 90% of all new restaurants fail within their first year—Even Stevens locations have become profitable within 30-60 days as customers return for high quality, well-priced, healthy food that feeds their hearts as well as their stomachs.

But no matter how worthy the cause, Even Stevens couldn’t succeed if their food wasn’t amazing, Zora told me. After trying the aptly named “Do Gouda” sandwich, with clean label roast beef, gouda cheese, and onion marmalade, served with a side salad and washed down with a local craft beer, I was definitely converted to the cause.

On Sundays, Even Stevens serves brunch with unlimited brioche French toast and $3 mimosas. As much as possible, the restaurant locally sources its ingredients, in keeping with its goal of sustaining the community.

With its convenient and attractive location, delicious food, and commitment to community, Even Stevens offers a unique value proposition to Boise diners: Eat well, and do good.

The Kill Jar: Obsession, Descent, and a Hunt for Detroit’s Most Notorious Serial Killer

Unity in the Community