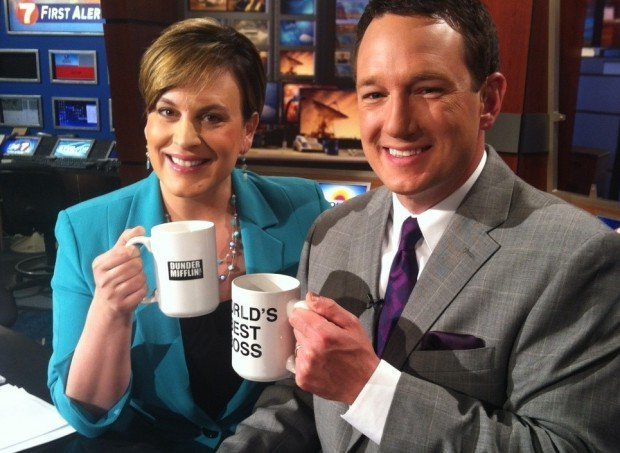 Maggie O’Mara, Today’s Morning News Anchor on KTVB, became somewhat of a superstar in the arenas of working mom and multitasker extraordinaire. She not only manages to find time to actively participate in her children’s lives, but does so while maintaining the role of dedicated news anchor.

“With each child, I have cut back on my hours at the station, and I do more work from home,” O’Mara said.

O’Mara remains on maternity leave until April 24, but as a dedicated professional in a fast paced business, one can see she feels the need to stay involved even when time off is allotted. As depicted by her recent Facebook photo of a multitasking mother, holding her newborn while working in the news station; captioned as “Good morning! Baby is helping me get some work done at the office this morning. We wrote a 7’s Hero that will air tonight. This is what I call multitasking!”

“She’s such a pro that no matter how much sleep she got the night before, how long her children kept her up at night or woke up in the middle of the night, when she gets here she’s all business,” Petcash said. “I don’t know how, some nights with two or three hours of sleep she powers through it. And I can’t tell, so I really don’t think the viewers can tell how tired she might actually be. She says that once you do it long enough, you get used to it and your body adjusts. Maybe there’s some truth to that but she’s amazing in that regard.”

So how does she do it?

“I have no tricks for dealing with my schedule, I just live it,” O’Mara said. “I’ve been doing this for 14 years. It never gets easier, but anchoring a morning newscast is where I feel I am most at home. We can show our personalities and truly connect and share with our viewers.”

With such hectic schedules and a growing family, where’s the tradeoff?

“As a working mother, I think you always have guilt,” O’Mara said. “I spend most of the day with my kids, but of course I want to be with them even more. On the other hand, I love what I do, so I do my best to balance both. I used to work 60 hours a week. That has changed drastically since my babies were born. I like having the luxury of being a mom and having a career.”

“I used to think I would move up the ladder to bigger cities, but now I have no desire to leave Boise,” O’Mara said. “I love this community! This is home. Looking back, there’s nothing I would have done differently. Every step I made allowed me to land where I am now. I love my life, and what I do.”

O’Mara’s content with her life and the teeter-totter of family and career. With Petcash’s “baby watch” tweets and kind words regarding his co-anchor, apparently he’s also pretty content.

So in this world of dual working parents, and sleep deprived mothers, apparently there is a way to have it all; loved by fans, respected by co-anchors, adored by family while maintaining the honorable title of working mom.

Cast a Line This Winter