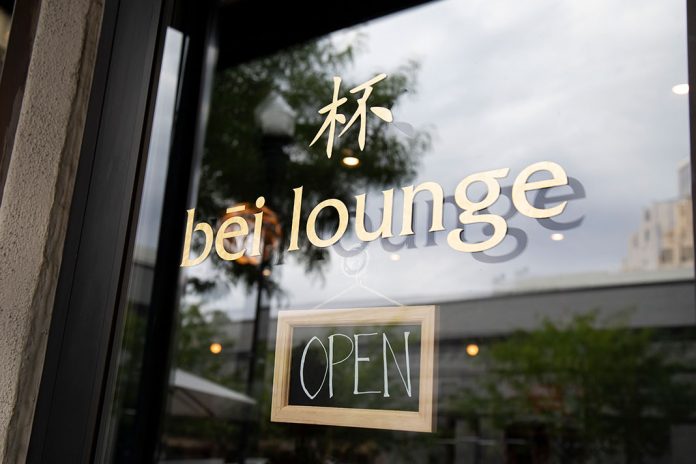 The word “bei” in Chinese means “cup,” a perfect signifies for Boise’s new Asian fusion lounge adjacent to Yen Ching, a longtime traditional Boise favorite. I’ve known Jeremy and Keri Chou, the owners of Bei Lounge, for several years now, so I was enthused to hear about their new establishment.  I guessed that the lounge would offer a modern twist (on the rocks) to the revered culinary legacy that the Chou family started in 1986 with the restaurant Yen Ching. My first visit to Bei Lounge exceeded my expectations. As its Chinese name implies, Bei is an ideal place to enjoy an après work Asian-inspired signature martini or cocktail accompanied by a savory appetizer or two.

When Yen Ching first opened for business, Boise only had a handful of restaurants in the greater downtown area. My, how times have changed! Most Boiseans can probably instantly name their favorite Yen Ching dish: My all-time favorite was and is the spicy General’s Chicken. Boise has come a long way in three decades—and the restaurant scene is now much more competitive. I knew that if the Chou family waited this long to open a lounge attached by a door to their family’s restaurant, they had something truly special planned.  It didn’t take long for my suspicions to be confirmed.

When I walked in the door, I instantly felt myself relax. The lounge itself is an inviting modern space with an open and airy feel. The colors are soothing with bamboo accented walls and surfaces. Light streams in through the large windows facing Ninth Street, and the décor has clean simple lines with a minimalist Asian theme. It’s a relaxed and relaxing place to wait for a table at Yen Ching next door, or to visit as a destination on its own. 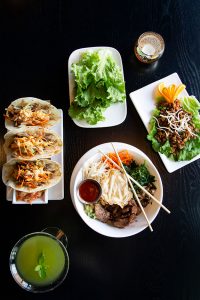 Bei Lounge prides itself on crafting signature martinis and cocktails, often with a local theme. One of the bartenders, Annemarie, developed a gin martini called the Greenbelt in honor of the 50th anniversary of the construction and unveiling of Boise’s treasured river paths.  Just like the name, the drink is green, earthy, and quite refreshing. It’s made with Bombay Gin, celery and lime juice, house made simple syrup, and mint strained into a martini glass. In addition to specialties like the Greenbelt, Bei has eight other martinis and cocktails, each exhibiting their own unique and exciting flavors. A full bar allows patrons to enjoy their favorite drink, even if it isn’t on the menu.

I was pleasantly surprised to learn that some of the dishes on Bei’s menu were inspired by old family recipes. The appetizers on the menu were very distinctive, which made it hard to choose just one. When I visited the lounge, Keri recommended one of her favorites called the Bibimbap Bowl. She told me that Jeremy’s mother, affectionally called Nai Nai by her family (which also is Chinese for “grandmother”), inspired the dish.  When the server brought the bowl to my table, it was clear that this wasn’t your ordinary appetizer. The bowl is a wonderful blend of hot and cold ingredients including vegetables, tasty bulgogi, and a fried egg all stacked around the rim of the bowl and presented over white rice. The best part of the Bibimbap Bowl was the fermented red bean sauce, which added the perfect amount of heat to the dish.

At the end of my time at Bei, I was sure that I would be back to try everything else on the menu—and next time, I plan to bring my friends to share a unique cup of Asian-inspired goodness.

For more on the menu and hours, visit www.beilounge.com.