We can only imagine the immense amount of work and perseverance artists must face to achieve their dreams. The Sam Henry Band is a Boise-based band whose sound is influenced by a variety of music throughout time. They started out making music for fun, without thinking they would one day record an album. In 2021, they made the band official, playing gigs and building a fanbase. Their progression in music felt natural, as they decided to make a place for themselves in the crazy world of music. Their first
album titled “Release” will be available this summer.

The Sam Henry Band has a unique sound of country, rock, blues, and even a touch of funk. Each member brings something different to the table. Their collective music experiences can be heard in their songs, and are smoothly fused together by frontman Sam Henry’s homegrown country vocals.

Sam Henry started playing piano when he was just five years old. As he grew, his love for music grew. With a gift of his first acoustic guitar from his father at the age of eleven, his passion only became stronger. Growing up in a home surrounded by country, folk and contemporary Christian music and support from his church’s Worship Team, a seed was planted. At the age of fifteen, he started writing his own music and performing. 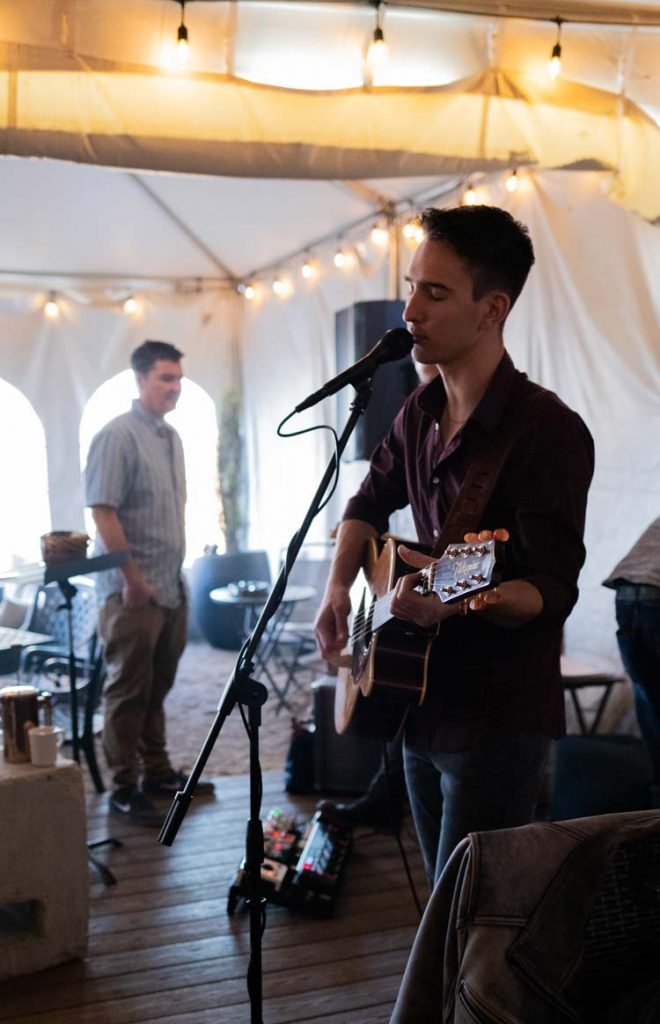 Though Sam Henry started out a solo artist, playing with his bandmates from church gave him a sense of camaraderie. He soon realized, “I’d rather pursue a career with a tight-knit band, than as a solo.” His love for his bandmates, a shared dream, and the music they make together, drove The Sam Henry Band to their calling. Tommy Fedak is the lead electric guitarist, Thomas Tubbs- bass guitar and back up vocals, Charlie Bounds- drums, and Sam Henry as lead vocals and acoustic guitar.

If the name Tommy Fedak sounds familiar, that is because he is a seasoned guitarist with forty years of music experience under his belt. Growing up around music he remembers, “Mom was the support and the key to making sure I had an instrument… We really didn’t have the $700 to buy an electric guitar, but mom made sure that I had one.” He started seriously playing music at the age of 14, putting together a band and booking gigs. Since then, he has traveled the nation gaining a wealth of experience along the way. He has learned that “Hitting the note is what it’s about.” His smooth, classic rock stylings take you on an emotional journey to a time when electric guitar was fresh and new.

Thomas Tubbs has been playing music since he was twelve years old. He started off playing electric guitar in his high school jazz band and continued to play in other bands, finding his way to bass guitar. He is the third generation, in his family, to become a musician. Being a family man himself, with two kids of his own, he’s noticed his six year old son already taking an interest in music. “I’m building a studio right now to get everything set up, so we can play music anytime we want”…“and he seems to be really interested.” Thomas doesn’t just play bass, he has brought a very rock-like sound with his back up vocals, beautifully complementing Sam’s lead country vocals.

Charlie Bounds has been playing drums since he was 12 years old. He recalls, “I first got interested in drums through metal music.” He was in his high school marching band and continued to study music in college. “I played with a bunch of different bands, usually I played more like metal and then rock and funk”… “I’d never played country, this is my first country band.” He is not just a drummer, but a true percussionist. Part of his drum set is handmade from his own craftsmanship.

The Sam Henry Band met through church, and though some have moved to different churches, in their hearts “This band is our church.” Their diverse backgrounds and life experience can be heard in their music. Their music can only be defined as a sound that is both past and future. When asked to classify their music genre they said, “It’s a unique blend.”

You can find out more and follow The Sam Henry Band through their Facebook page at https://www.facebook.com/samuelhenrymusic00. Check https://linktr.ee/Samhenrymuzic for more about their first album, “Release.”

The Sam Henry Band has a unique sound of country, rock, blues, and even a touch of funk.