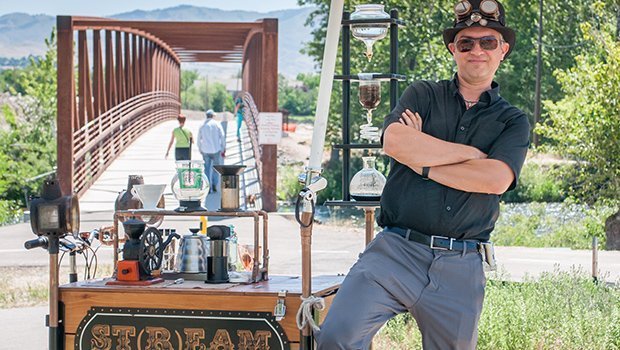 
I heard about this Steampunk themed coffee bike that is often found near the Greenbelt. I knew nothing more, so I went searching. I found an artist who knew of it, people on the Greenbelt had seen it, and I hoped that I would round a corner by the 36th Street Bridge on the Greenbelt and find the bike with its black and white striped umbrella waiting for me, an oasis.

The day I met with Eichelberger was his one year anniversary of beginning his business, and with a mission of being a surprise to his customers, I found the man was just as intriguing. Upon interviewing him, I thought I’d find a cool story, but little did I know I would find a 5th generation Boisean, a puppeteer, an original cast member of the Tony award-winning musical Avenue Q, a purveyor of local artists, as well as a writer, director and composer.

A true Renaissance man, Eichelberger was living in New York, commuting to Reykjavík, Iceland to film the show Lazy Town when he came up with the idea of ST{r}EAM.The idea was originally a tea tent, a thing that appears like a mirage, surprising the unsuspecting customer with the readiness of a hot beverage.

When he made the decision to move back to Boise and found he would be living near the greenbelt, the whole idea came together. He looked at the realities of serving hot coffee on the go, researched pour over equipment, and when his three tiered cold brew contraption arrived, it looked so steampunk, everything solidified.

There is a definite performance aspect to the bike, every inch has had thought put into it. From the depression era glass of his grandmother’s he uses to the music he plays. Everything is self-contained as well, he bikes to his destinations, the hot water is heated beforehand, beans are ground using an old bin hand grinder, and with the use of pour overs, and cold brew coffees, the focus becomes the natural flavors of the bean, to bring out the local characteristics, much like wine. A true experience all around. And that’s what Eichelberger wanted, a moment of neighbors meeting neighbors.

If you’ve never heard of the ST{r}EAM bike, it’s because Eichelberger believes in organic growth, he wants to allow people to find him on their own, and he likes to be in remote locations. He also believes in supporting local artist. A friend in Portland helped him build the bike. The hat he wears was made by a local artist, and he created an artist tour of Boise with ST{r}EAM. He takes 15 people, starting of course with a cup of coffee or tea and then tours several artists and the places they work, ending at a local bar. “There are so many wonderful artist in the Boise, I’ve only had to repeat 2 artists twice on my tours.”

Passionate, intriguing and entertaining, it’s obvious Eichelberger is enjoying life and having a lot of fun. Want to know where SR{r}EAM will be? Check out the Facebook page, or take a stroll along the greenbelt, who knows what you’ll find when you turn a corner.

ABOUT US
Greenbelt Magazine aims to keep you informed about what’s happening in this great community of Boise, Idaho. Feature articles include interviews with local residents and business owners, culture, gourmet foods, recreation, real estate and local events. Readers will be consistently entertained, educated, and enlightened by each issue.
Contact us: tia@greenbeltmagazine.com
FOLLOW US
© 2020 Greenbelt Magazine. Website by Senze Digicraft