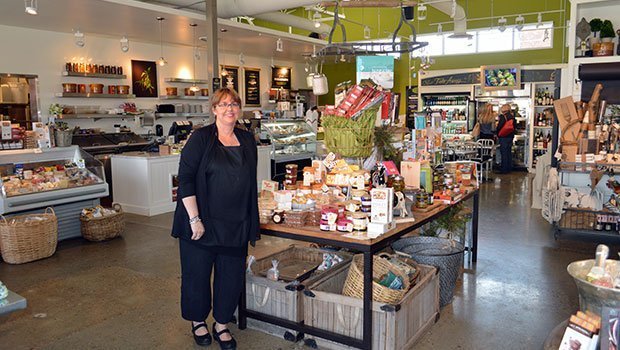 A true culinary gem in the Linen District

Life happens at the kitchen table. Family and friends all around the world gather together at tables with one uniting factor: food. Lisa Peterson, owner of a’Tavola, grew up living and loving this virtue. It’s no wonder then that she created a business, a family of employees, and a space for people to gather with a’Tavola.

Peterson started in the food industry when she opened Eat Your Heart Out Deli in McCall. From this venture, she began working at the Co-op in Boise, a job that was only supposed to last three months. Flash forward 20 years later, and Peterson was on a roll. She was invited to start a café at the Shakespeare Festival. Eventually, she retired from the Co-op and built a commercial kitchen in her house with the intent of offering a home delivery meal service and cooking classes. With a busy family of her own, she understood how difficult it is to put a fresh cooked meal on the table every night, and with that a’Tavola was born.

A’Tavola—literally at the table—is “an umbrella term that would stand for anything I wanted to do, I knew no matter what I did, it would always revolve around food,” Peterson said.

a’Tavola has been a star in the community for eight years, and has been at its permanent location on the corner of Grove and 13th the past three.

“Every single day, we get a customer in who has never been in before and they love our store,” says Peterson.

Who wouldn’t? Stepping into the store is an exercise in sensory delight. Crisp, welcoming green and white walls are the backdrop for spectacular displays Peterson creates herself. Towers are laden with books, utensils, intriguing jars of jams and sauces, sets of dessert plates, and other inviting trimmings. An espresso bar grins with cakes and sweets. A cold case offers cheeses, meats, take home meals, beer, and wine, while another case shows off the day’s freshly made delicacies. The sound of laughter and conversation completes an environment of delighted customers.

It feels as if you’ve stepped into a European market, but Peterson says, “The idea of it being a European Market never entered my mind.” She simply wanted to create an enjoyable experience for customers, where she could inspire others and share her passions. There is a huge floor to ceiling bookcase of cookbooks, her own collection that resides in the store so that she can have a place to share them with others. It is this kind of attention to detail and thoughtfulness that continues to make a’Tavola a success.

Well, that and the high quality food. How good is it? Peterson can boast repeat customers for 20 years who have followed her creations from McCall to Boise. That alone speaks volumes.

All the food at a’Tavola is made from scratch. When asked if she dreams of food, Peterson shakes her head, responding, “I don’t have time to dream.” She is truly a dedicated, hardworking woman who loves her job. When the doors close to the public, the store opens up for private events. In the summer months, Peterson runs the café at the Shakespeare Festival, and in her free time, Peterson and her staff cater weddings and other events.

a’Tavola and its dedicated staff are a well-oiled machine, but Peterson’s secret to success? “I strive every single day to make it better,” she says.

Culinary Arts for the Common Good

Advice that’s Worth Its Weight in Gold