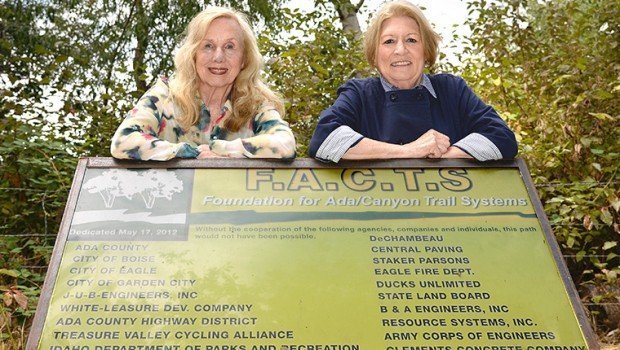 In 1987, when Judy Peavy-Derr was elected as Ada County Commissioner, she envisioned a lofty goal for the Boise Greenbelt: to take the popular trail all the way from Lucky Peak to Eagle Island State Park by 1990. Almost 25 years later, that goal is nearly complete with more than 20 miles of continuous trails, and Treasure Valley residents are able to enjoy the numerous benefits this linear park provides. Now, the Foundation for Ada/Canyon Trails, or FACTS, is Peavy-Derr’s new passion, and she has an even loftier goal: to extend the Boise River trail all the way to the Snake River.

According to Peavy-Derr, there are four major reasons that a recreational trail is important to communities. The first is recreation. “Families can enjoy themselves for little or no money, walking or biking on this beautiful trail,” she told me when we spoke about plans to connect with Canyon County’s trail systems.

The second benefit is health and fitness—walking or biking on the Greenbelt promotes a healthy lifestyle. The Greenbelt also provides an economical and environmentally friendly alternative for commuters who want to forego Boise’s increasingly frustrating rush hour traffic.

Finally, the Greenbelt is an important factor in the region’s economic development. Bill Gigray, a Caldwell attorney who has led Canyon County’s bike path efforts, notes that lifestyle amenities like the Greenbelt are attractive to businesses considering relocation to the Treasure Valley. “Communities need to have as many amenities as they can offer,” he told me when we spoke about his work with FACTS by telephone. “A community’s presentation and amenities are a reflection of the people who live there. Communities that are merely utilitarian will not attract the kind of growth they want to see.”

Sharon Hubler, the Secretary/Treasurer of FACTS and former Executive Director of the Boise River Trail Foundation, looks not only at its economic future, but at the trail’s rich history. “We are following the path of the pioneers,” she told me as we discussed plans to extend the Boise River trail to the Snake River. “They are the ones who crossed these rivers to get to where they were trying to go.”

FACTS works closely with the Idaho Foundation for Parks and Lands to secure easements and land grants from landowners who want to leave a legacy to the community. Gigray has also been instrumental in creating relationships with local highway districts to facilitate the trail’s extension. “Nampa, Caldwell, Meridian, Middleton, and Star have all been involved in plans,” he said, noting that they are also developing relationships with the wine tourism industry. “We are working with these communities and the highway districts to coordinate pathways and access routes that would take us not only to the Snake River but also out to Lake Lowell and its recreational opportunities.”

For these three community leaders, the Race to the Snake is a goal worth pursuing. “It fuels the economy, promotes community values and relationships, and offers close-to-home recreational opportunities,”Hubler said. “There is nothing like the beauty of scenic pathways. It connects us to the pioneer spirit.”

For more information about the Race to the Snake, visit www.factsidaho.org

David Wali – Skiing Mountains and Moving Them, Too

Through the Lens of Pet Adoption

Cheers to Beers and the People That Craft Them