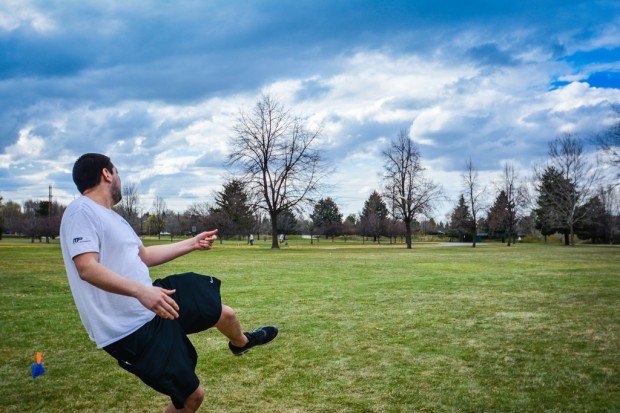 Do not confuse disc golf with “Frolf”, as I accidentally did within earshot of a Boise disc golfer. Frolf is for 15 year-old anarchist wannabes who loathe the idea of rules, structure and a predetermined course.

Disc golf, on the other hand, is something entirely different. This subculture sport closely emulates golf, as the name clearly indicates, but does so without the graphite clubs, your grandfather’s plaid pants or a rented cart.

If you’re just teeing off for the first time as a disc golfer there is nothing wrong with using any old Frisbee you might have around the house and giving it a shot. But, as I found out, if want to do it right, get the proper equipment.

That’s right, there is proper equipment.

Just like the traditional game, disc golfers use drivers and putters – but these baby’s come with names like The Comet, The Viper, The Vulcan and The Nuke. And, like traditional golf, they are used to score bogies, shoot on par and even score an elusive hole in one.

The similarities don’t end there. Just like the traditional enthusiasts, who would rather spend a day knocking back 18 holes than knocking boots, these hardcore golfers are out rattling the chains on the buckets year round.

With two established courses at Ann Morrison Park (Northwest & Southeast), and other local courses across the Treasure Valley from Bogus Basin to Nampa’s West Park, it has become abundantly clear that disc golfers take having fun much more seriously than the rest of us.

If you find yourself wanting to play, but aren’t sure how, just hit the links at
Ann Morrison Park and ask your fellow golfers what’s up. Most folks who play this game are of the friendly sort and are happy to help. Before you know it, you’ll be handed a disk and instructed to “let ‘er rip.”

After you’ve been out on the course a few times, you’ll be hooked. “The game is great and everyone I’ve met has been friendly and accommodating of the ‘new guy,’” says Jax Cooper, a first timer to Ann Morrison’s course. “I see myself spending a lot of time here over the summer.”

And it’s no wonder why Cooper, along with so many others, is hooked. There’s something undeniably exhilarating about aiming a brightly colored disc at a hole 300 – 400 yards away and scoring. And, just like its more traditional cousin, competition can be fierce and the shots a little tougher than you might imagine.

If you’re interesting in getting geared up for the coming disc golf season, talk to the pros at Boise Disc Golf, located at 966 S. Vista Avenue in Boise’s Vista Village. You can also learn more about the sport and its gear at the Professional Disc Gold Association’s website, http://www.pdga.com.

Naturally Healing and Rejuvenating the Body