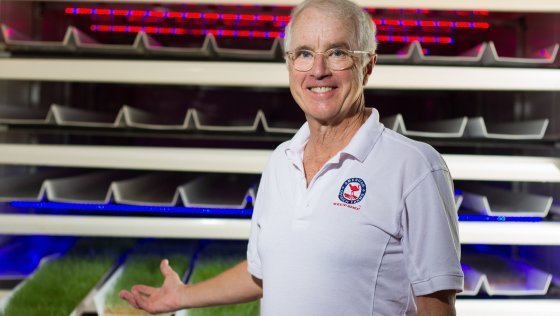 What would possess a successful, wealthy, soon-to-be retiree to dive into a complex new business that until recently, he knew nothing about? It’s simple: the love for a son. Brian McCoy, a real estate developer based in Sun Valley, is in the process of winding down his career. Rightfully, he should be polishing his golf clubs and looking forward to hours of chasing the white ball on a lush, green course. Instead, he’s spending more and more time on an arid, windy, sagebrush-dotted 120 acres several miles south of the Boise Airport.

He’s not alone out there. He’s got plenty of company—his son Alex and his young family and over a hundred “breeders”—ostrich roosters and hens. There are clean pens, corrals, and warming units everywhere. From a temperature- and oxygen-controlled room with eggs on warming trays and brand new baby ostriches the size of full grown chickens; to mamas and their “toddlers” in several corrals, and breeding pens where a pompous 280 pound male, with his prehistoric feet, struts around servicing his “ladies”—it is quite impressive. Especially when you learn McCoy’s son Alex is already one of the largest suppliers of ostrich meat in the U.S. and expects to become the ostrich version of “Colonel Sanders” in the next year.

Ostrich meat is a red meat, higher in protein and lower in cholesterol than chicken or turkey. The McCoys say it is a cottage industry and they see themselves where Purdue and Tyson were a hundred years ago. However, there is nothing antiquated about their operation. Everything is computerized, with technology touching nearly every aspect of the ranch—all the way down to the radiant heated floors in the brooding barns.

“I want to see him grow his business and minimize mistakes,” said Brian McCoy about trading his retirement to help his son. He brings decades of experience to the task of running the business. And that know-how to research, to find what works and what doesn’t, is already proving to be a huge windfall. McCoy has developed a system to reduce feed costs by 50% to 70%—from $100,000 a year to well under 50. “This system could have a huge impact in the Ag industry,” said McCoy. “It could be used to cut costs and feed dairy cattle, beef cattle, sheep, goats, and horses.”

What is most impressive, perhaps, is the fact costs are not only cut but so also is water consumption. Like a modern day mad scientist, McCoy has tinkered with, finessed, and fine-tuned what’s known in the Ag world as the Fodder Box.

He’s taken a used, extra tall shipping container and outfitted it with eight levels of 13 foot long trays. He fills those trays with barley seed, then has a “recipe” for a certain amount of hourly water and a certain amount of LED lights (he’s testing whether red, blue, or a combination works best). Within six days, he has rows and rows of tall, leafy, luscious, and highly nutritious feed for the flock. “We see a tremendous economic benefit and a tremendous nutritious benefit,” said McCoy. “This Fodder Box feed has actually been shown to increase fertility.”

It may sound simple but it is really quite complicated. McCoy has an elaborate computer program that monitors and manages all the gadgets controlling the water spray, the Carbon Monoxide levels, the humidity, the temperature, the lighting, and the mold risk. His set up is so sophisticated that visiting children have asked him where he keeps the speakers. “They think it looks like a disco,” said McCoy.

He soon hopes to have all the scientific variables figured out to determine what combination works best to produce the highest yield with his Fodder Boxes. And from there, he believes his new streamlined system could have a huge impact on medium or large size ranches or farms, especially those in areas that struggle with water (think California and parts of Texas). “Do you remember two years ago when they had to slaughter all that cattle down in Texas because of the draught?” said McCoy. “This will eliminate the dependence on water or natural rainfall and take a chunk of the risk out of farming.”

The Love Language of Gifts