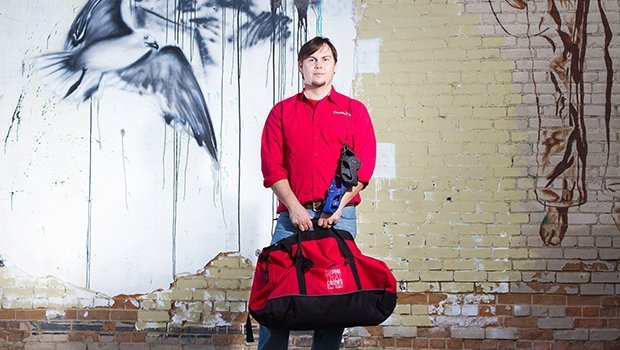 If you’re a parent like I am, you’re probably familiar with the seemingly endless struggle to keep your children’s growing feet protected in shoes that fit. For Kenton Lee, an entrepreneur and pastor born and raised in the Treasure Valley, that struggle took on a sense of urgency when he travelled to Nairobi, Kenya after college to help 140 children who had lost their parents to HIV/AIDS and were now living in an orphanage, dependent on donations for survival. As Lee was walking with the children one day, he noticed a little girl in a white dress.

“I was shocked at how small her shoes were,” Lee told me when we spoke about that life-changing trip. “They were so small that she had to cut open the front of her shoes. My American mind said, ‘Why doesn’t she put on a different pair of shoes?’ Then I realized that she didn’t have any other shoes.”

Looking around at the other children, Lee realized that it was a common problem. The orphanage’s director told him that there had been no recent donations of shoes, and that they had no money to purchase new ones. That’s when Lee asked a simple question: wouldn’t it be nice if there was an inexpensive, durable pair of shoes that could adjust to children’s growing feet?

Lee and his wife Nikki started looking around to see if adjustable shoes were available, and they found nothing. They contacted major shoe manufacturers and suggested the idea. No one was interested.

I thought, “Maybe I’m not explaining this right,” Lee told me. “Then I decided that it I wanted to make it happen, I was going to have to work on the idea myself.”

He bought 20 pairs of shoes and started cutting them up, piecing together a prototype. Through connections, he found a shoe development company in Portland. Founded by four former Nike employees, Proof of Concept understood Lee’s vision immediately. They helped to make the first working prototypes, and in the summer of 2012, Lee and his wife took 100 pairs of shoes to Kenya for their first trial. The children loved their new shoes, sturdy sandals that adjust up to 5 sizes, and The Shoe That Grows was born.

In April 2015, all 3,000 pairs in inventory sold out as nonprofit organizations purchased them for children in poverty-stricken regions around the world. “That was the tipping point,” Lee told me. “We had hundreds of phone calls, thousands of emails. Our next 5,000 pairs are already pre-sold, and we’ll have 20,000 pairs in December.” Lee’s concept was even featured in a Smithsonian Magazine article.

Lee is excited about the company’s future. Though there were obstacles and failures along the way, the idea just made sense for children in need. Though the shoes were initially developed without U.S. sales in mind, local demand for the hybrid sandal has proven so great that Lee has developed an innovative purchase model for U.S. customers: buy one pair for $50, and two pairs will be donated to a child in need.

“We want to connect people who work with kids around the world,” he told me. “I’m so excited about the impact that are shoes are having on children’s lives.”