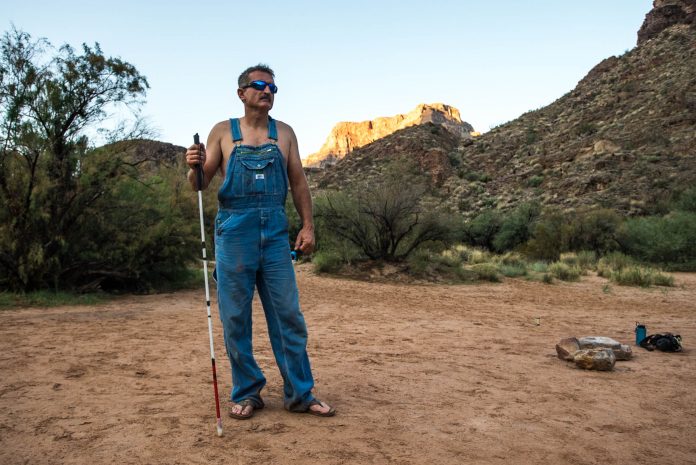 It is said that when someone loses a sense, the others sharpen, overcompensating to make up for the loss.  The brain rewires, processing its existing senses differently, allowing new powers to emerge from deficiency.  Perhaps it was this heightened awareness that made the roar of the silty brown Colorado River even more inviting and mysterious to Lonnie Bedwell. At first, it was terrifying for him to get off the couch, to reconcile the depression and literal darkness of his recent blinding.  Bedwell eventually learned to trust in others, relentlessly encouraged by his three daughters, and have faith in his own resilience.  His hands met damp sand as he scooched his kayak into the rushing sweep of that mighty ditch.  He let go, trusting in his friends to help him along, and the river to show him the way.

The Long River Home follows Bedwell and fellow veterans and kayakers Russell Davies and Aaron Howell, a double amputee, as they navigate their traumas, embrace new strengths, and find flow in the belly of the magnificent Grand Canyon. Davies and Howell paddle alongside Bedwell, yelling out directions and running safety, as he navigates the 226 miles of the Colorado River. Local director, producer and Army Infantry veteran Seth Dahl kayaked alongside these men as he captured their stories and reflected on his own. His media company, Big Cedar Media, is focused on the veteran experience. “We need hopeful stories and there is so much we can learn from the selflessness, accountability and duty of our veterans.” They face incredible challenges, but keep a forward focus. Bedwell encourages, “When someone shows you a light, a path out, step forward and take it.”

Dahl has spent many years on Idaho rivers, kayaking and river guiding. “The river helped me adjust after I got out of the service. Kayaking is fear management, you just need to drop into the rapid and figure it out. We don’t always get all the beta for the ideal line, but you adjust.  It is a great metaphor for how we should approach life. “

Dahl and his film The Long River Home are inspired by the resilience and tenacity of service members. To say that military service is challenging and transformative falls painfully short, but veterans don’t necessarily come back impaired, they come back changed. Russell Davies highlights this in the film, “The thrill and the rush of it is something that is ingrained in us from being soldiers. As veterans you have that inside, you shouldn’t close it off, you’ve got to explore your options and you realize this is who you are now.”  The film travels through the serpentine beauty of the Grand Canyon in a sunlit showcase of the powers of erosion, of loss and gain and change, to make something quite magnificent. It is a fitting backdrop to the inner journeys of Bedwell, Davies and Howell, as they accept their limitations and embrace their new sharpened perspectives and powers.

We all have couch moments, where the odds seem unsurmountable to move forward, but ultimately it is only us who can make the move.  In this film Dahl encourages us to “get off the couch and go live.  Kick out in the current and see where it takes you.”

The Long River Home will premiere at the Banff Mountain Film Festival and be shown in Boise at The Egyptian Theater on January 27, 28, and 29.

Zip into Summer with Veronica Scooters