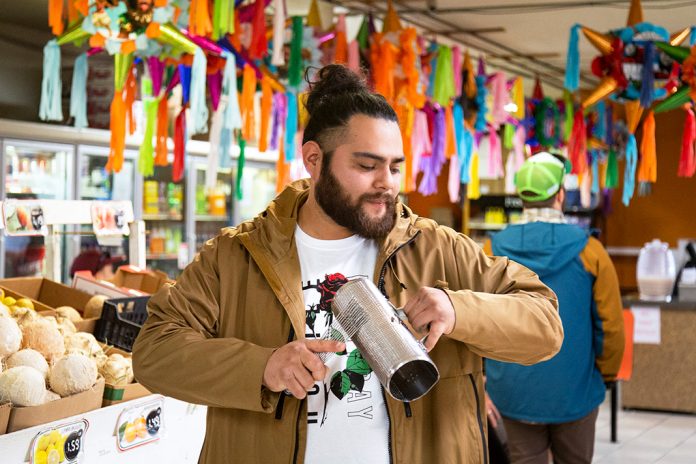 First-generation American, Lobo Lara, creates his Cumbia-style of music to unite and inspire others. His music tells stories through unique beats that move the body—mind and soul. In 2018, Lobo Lara released his first album, Immigrants, and the wave of success that followed was incredible.

Shortly after his release, he was signed to a record label—Americano—with El Dusty, musician and producer from Corpus Christi and fellow Cumbia forerunner. With a record label behind his music, things began to move quickly and word of Lobo Lara’s unique musical talent began to spread. Soon, other notable figures in Cumbia, like Svani Quintanilla, took notice and joined with Lobo to create their own remixes of Paletas, one of Lobo’s hit songs.

Rooted deep in Columbia culture and history, Cumbia is an expression of art and soul using two different musical mediums: percussion and wind instruments. Cumbia’s distinct sounds are a blending of three different cultures—African, Indigenous, and European. While the original roots of Cumbia are often debated, one thing is for sure: Cumbia is powerful and will absolutely get you on your feet.

Lobo Lara was introduced to a wide variety of music styles as a child, and he attributes his eclectic music taste to his upbringing, where his parents would listen to a diverse array of Cumbia, disco, 80s electronic, Reggae, rock and roll, and a lot of rock styles from the 60s.

“I truly thank my parents for giving me that diversity,” Lobo said. “Music is like food for me; I can’t have a cheeseburger every day.”

Lobo Lara has always had a passion for music, but his musical journey began when he was 13. “I started recording freestyle and written raps on an MP3 player. I’ve been self-taught, so it took me a while to understand how music works. I’ve always teamed up with friends to make music, so I’ve had quite an intersecting journey. I started off with Electropop and from there it went to, Alternative, Hip-hop, Trip hop, psych pop and now Cumbia.”

Lobo’s hit Paletas has been storming the Cumbia scene, with popular artists hoping to jump on the bandwagon. “As I was writing the album Immigrants, I wanted to create something super Colorful and Tropical, I was testing my abilities on writing pop music. It’s the first Cumbia Beat I created. After the beat was complete, I didn’t have any lyrics and it stayed like that for a couple months. The hook came to me when I heard a lady selling Tamales, she kept yelling out “Tamales!” That moment got me thinking… and it eventually went from Tamales to Paletas. Once that idea hit me, I started recording right away. I’ve always wanted to see my people grow so I do it through my music videos,” Lobo explains.