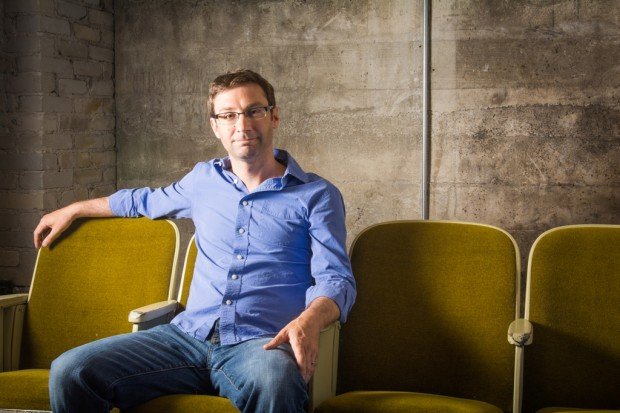 For Boise Contemporary Theater’s Dwayne Blackaller the world is a stage, but he is no mere player

“Two and a half years ago,” Dwayne Blackaller tells me with the enthusiasm of somebody who has experienced a transcendent thing, “I was diagnosed with M.S.”

To hear this from somebody so grounded in the physical comes as a surprise. Blackaller works in the theater – he acts, writes, teaches, and directs plays at Boise Contemporary Theater – and theater involves intensely physical work. Blackaller looks, moves and speaks like a well man, but he has been marked as someone whose body might at any moment betray him.

The strike of his illness came quite theatrically: he was performing Macbeth, and just as one of the witches delivered the line, “By the pricking of my thumbs, something wicked this way comes,” Blackaller felt his thumb tingle and go numb. “The timing was uncanny. And then the numbness spread up my arm, and up the center of my body. For a month, I could not feel textures or sensations.”

Although his body returned to normal after that, he believes that his diagnosis is one reason he has been writing so ferociously since then – “because after that happens once, you don’t know how long until it happens again.” In this way, the threat to his body became a sentence for him to do the best work possible and do it now.

And Blackaller has been prolific – in the two years since he has returned to his hometown of Boise to work as Educational Director and Associate Artist at Boise Contemporary Theater, six of his plays have been produced and, he estimates, viewed by about 70,000 people. This is no small feat.

Blackaller’s fascination with theater dawned at age sixteen; he was then (and still is, he tells me) “a champion procrastinator.” While a student at Boise High in the 1990s, Blackaller woke in the night realizing that he had an assignment due the next day: to write and memorize a monologue. He quickly wrote a play (“a really cheesy story!”) about a Roman Ghost wandering the earth for centuries and advising a teenage boy that life is worth living.

“I hadn’t finished it by class-time, so I had to improvise the ending,” he adds. And it worked – by the end of the monologue, half the class (including the teacher) were crying. He thought: This is genius!

He soon began work on a second play entitled “Vegetables Are Always Better Dry,” and when it was banned from Boise High because of the subject matter (cannibalism) he and his friends rented a performance space and put on their play anyway.

To this day, Blackaller remains indebted to these experiences. He is most excited by producing what he calls “brand-new devised work,” and he works to a deadline still, often booking a show before the play is completely finished or even what we might call started. “Procrastination is a desperately important part of my work,” he explains. “I like writing to the show. But that requires trust – both trust in your ability, and trust from the audience.”

At Boise Contemporary Theater, Blackaller heads the Theater Lab, an initiative that brings together junior high and high school students for five weeks, just long enough for the students to brainstorm, write, produce, and act in a play. Blackaller also serves as a sounding board for Matt Clarke, the theater’s Artistic Director. “I help him vet stories, read plays. I get to help choose the season.”

What he helps choose to perform are plays that are humorous and heartbreaking and beautiful – but very rarely easy. “At Boise Contemporary Theater, we find work that keeps people talking,” he says.

And yet – and yet… for all the darkness, and there is much darkness, the Boise Contemporary Theater plays invariably end in a state of grace.

“Yes!” Blackaller says to this observation. “We want there to be an emotional lesson for the main character, something that transforms the character for the better – and transforms the audience too.” He pauses. “You don’t want it to be the kind of work that is selling a moral – but it should ask the right questions so hopefully the audience discovers something with you. Plays are better when they are about a question instead of a statement.”

Between growing up in Boise and returning home to further Boise theater by writing and directing bodies through space, Blackaller lived in many other places – but being back in Boise feels right. “I love the physicality of this place. The way it smells, how it looks from an airplane. I love these mountains more than any other mountains.”

He feels Boise in his bones, he says; and when the body insists, he knows to listen.

A Trip Around Boise with It’s A Boise Thing!

Do You Have What It Takes?

Acting In The Treasure Valley

The Village at Meridian