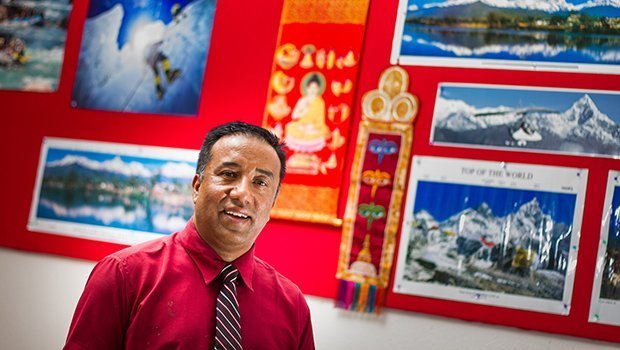 Amid the gleaming walls of his newly-reopened Himalayan restaurant in Southeast Boise, Rajesh Shrestha bridges two worlds—the burgeoning Treasure Valley international restaurant scene and the devastation of his family’s earthquake-shattered home in Nepal.

The soft-spoken Boise restaurateur—owner, operator, waiter, and greeter at the Mount Everest Momo Cafe at 2144 South Broadway—scrolls solemnly through photos on his smartphone. They attest to the severity of the 7.8-magnitude quake that shattered the houses of his parents, brother, and in-laws in Kathmandu at the end of April.

Rajesh owns and operates the region’s only remaining Himalayan and Nepalese restaurant, offering a tempting array of yak, chicken, pork-filled momos, and homemade naan flatbread to a local clientele who are increasingly seeking out this modest family restaurant that almost never reopened.

In November 2014, a fire that began elsewhere in the small South Broadway shopping center devastated adjacent stores and shops and put Rajesh Shrestha out of business for six months. While the Mount Everest Momo Cafe was being rebuilt Rajesh returned to Nepal to better expand his repertoire of Nepalese and Indian dishes, and plan for his grand reopening, which occurred in May.

“I never thought I would be a restaurant chef,” says Shrestha, who holds a bachelor’s degree in science from Tribhuvan University in Kathmandu and who studied civil engineering at Boise State.

In fact, Shrestha’s personal resume reads as diverse as his restaurant menu. He’s been a travel agent for visiting Americans in Nepal, lining up tours and guides of the spectacular, land-locked country dominated by the 29,000-foot Mount Everest that straddles the Nepal-Tibet border. He was a ticket agent for Singapore Airlines for two years.

In 2003, Shrestha moved to the United States, where he now runs his restaurant and moonlights as a Nepali translator at St. Alphonsus Regional Medical Center for the small, but close-knit Nepalese community in the Treasure Valley. His wife Rajesori, a day care and pre-school aide, helps run the restaurant while several refugees from Bhutan and Nepal assist with the cooking.

“First-time diners need to try my momos first, then sample my Tibetan noodles and my Indian lunch specials, like the chicken or vegetable curry, and my butter chicken, chicken tikka marsala, and chicken korma, which are meats braised with savory spices,” says Shrestha. His menu features several vegetable options for non-meat eaters, and the degree of spiciness of various dishes and curry sauces ranges from mild to hot, adjusted to the taste of individual diners. Rajesh keeps the menu simple and limited, which allows him to keep prices down and focus on making each meal the freshest and best tasting it can be.

Through word-of-mouth, an active Facebook chatter, and his “soft” reopening, Shrestha’s customers are returning to the Mount Everest Momo Cafe, lured by the authenticity of the menu and the engaging graciousness of its host. Within his first month after last May’s debut, more than half of his regulars had returned.

Just when he was finally getting back on his feet after the fire, Rajesh heard about the tragedy in Nepal. Luckily, the members of his family were left alive and unharmed. “The first thing I thought about was my family. All night I tried calling. I didn’t sleep at all. Cell phone towers weren’t working. I tried online and couldn’t get ahold of anyone. Luckily, the next day, I located one of my friends on Facebook. My first question was, ‘Is everyone okay?’ I didn’t care about the property,” he says.

A modest disaster relief donation box continues to sit on the counter of the Mount Everest Momo Cafe. In May a $100 bill anonymously turned up in the container, contributed by a generous but unheralded Boise resident.

The process of rebuilding—both a nation and a restaurant, separated geographically by 7,300 miles but joined by a common humanity—continues.