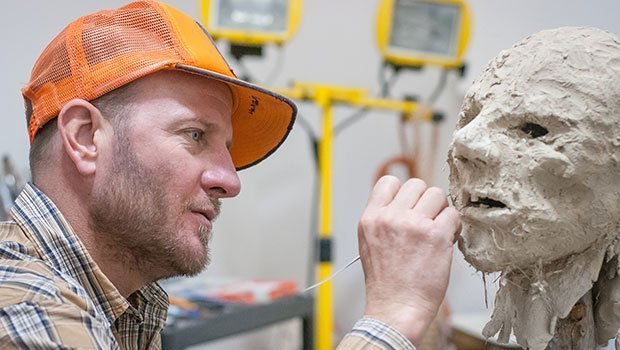 Kris Hargis is many things: a nationally recognized artist and illustrator, a graduate student in Boise State University’s MFA program, and a skilled carpenter. But above all else, Hargis is a maker. And the things he makes reveal the beauty and vulnerability of the human experience.

“Seeking is a big part of the creative process for me,” Hargis explained when I met him in his studio at BSU’s Fine Arts Center. His sculptures incorporate wood, bones, teeth, and even copper wiring, assembled and informed by their maker’s fascination with indigenous cultures and primitive art. “I’m aware of the arguments against cultural appropriation,” Hargis said. “But these forms inspire me.”

Hargis’s love of drawing and painting was inspired by an early interest in architecture. Born and raised in Omaha, Nebraska, he earned his bachelor degree in Visual Communications from the University of Kansas in 1998, then relocated to Seaside, Oregon after a backpacking trip on the West Coast. Hargis has been commissioned as an illustrator for prestigious national clients including Starbucks, Boston Magazine, Hard Rock Café, and Portland Center Stage. But his true passion is creating his own art. “My work as a carpenter enabled me to make a living on my own terms,” he said. “I could make the art I wanted to make.”

Hargis’s first solo show was at the Froelick Gallery in Portland in 2002, where he exhibited his introspective self-portraits and still-life work. Today, Hargis is still represented by Froelick; one of his mixed media sculptures was selected as a Portland “Critic’s Pick” by Art Ltd. In November 2014.

He met two Boise artists at a Whitman College show, and they talked him into returning to school for his Master in Fine Arts degree. When he started the program, he saw himself as a painter and illustrator. But his teachers pushed him to explore sculpture. “I had to get over my hang-ups,” he said. “In life and in school, I have felt very vulnerable. This body of work expresses that vulnerability, not as a weakness, but in the sense that we all need a helping hand sometimes.”

The sculptures are headless and roughly human in form, incorporating found branches, which Hargis has joined and incised by hand. In partnership with the organic bodies are delightfully grotesque naturalistic Adobe clay heads, exhibited at eye level where they can engage the viewer in silent conversation. “I have always been intrigued by the gaze,” Hargis said. “There’s an interplay, an inter-subjectivity between the viewer and the art form. With the heads, I was trying to get away from the perfection of Classicism. It’s the antithesis of perfect art.”

Hargis includes Austrian painter Egon Schiele and German printmaker Horst Jannsen as influences on his own artistic style. As he passes the halfway mark in his academic program, he is considering his future, which may include teaching; he presented a successful workshop on self-portraits last summer. But one thing is certain: Hargis will keep making art. “I call myself a ‘demiurge,’” he said, referring to the Platonic maker of the material world. “I have to keep making. If I don’t make, I am a different person.”

Avoiding Student Loans, One Step at a Time