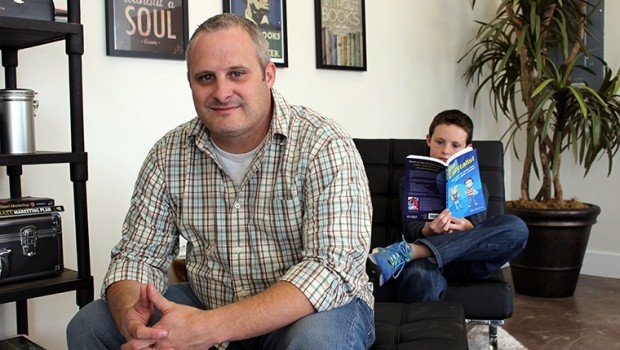 Tobe Brockner’s passion for entrepreneurialism is in his blood. As a child, he observed his grandfather, Grady Brockner, turn his finance company into a multi-million dollar business. The kind, community-minded senior Brockner was had a tendency to perform anonymous acts of service, such as slipping a generous check to a woman who had lost her job or bringing flowers at Christmas to the women working at the courthouse. The unassuming man looked out for others in a quiet, non- flashy way. Sadly, Mr. Brockner died of cancer at the young age of 55, taking his philosophies on business and life with him.

Thirteen at the time of his grandfather’s passing, the younger Brockner never got the chance to talk to him about those things that really mattered. Not wanting to repeat that, his strong desire to share knowledge led to the establishment of the free, annual Young Entrepreneur’s Workshops for Boise area kids, which has been running for the past three years, and the subsequent Passport to Boise program, where kids are welcomed into businesses to learn skills directly from business owners. It also influenced the name of Brockner’s latest venture, V-Squared Creative, derived from the idea of trading value for value.

“Principles like following your passion, purpose first, profits second, being a servant leader, and paying it forward, are all found within the book’s pages.”

But the businessman and author’s recent book “Kid Capitalist” was born from a conversation with his son Beau about what he wanted to be when he grew up. His reply included every possibility but “business owner.” When the option was suggested, Beau said, “I didn’t even know you could do that.”

Many conversations about business and capitalism with Beau and his sister Scarlett followed thereafter, as their father explained why he felt one of the noblest of callings was that of an entrepreneur. The two began visiting their dad’s office frequently, and were fascinated. Brockner started jotting down the things he felt they should know, with the intention of compiling them into book form for his kids.

“Starting, building, and running a company was well within their reach,” Brockner said, adding, “I wanted to make sure they knew that.”

Realizing that all kids could benefit from the business lessons, he contacted a local publisher and decided to produce the book, entitling it “Kid Capitalist.”

“It seems like capitalism has gotten a bad rap. In many cases, what people are upset about isn’t even capitalism, it’s a watered down version. Big businesses buying out corporate henchmen to do their bidding, that’s not how this is supposed to operate. Businesses aren’t bad, and they can do far more good than harm if they follow basic principles.”

Principles like following your passion, purpose first, profits second, being a servant leader, and paying it forward, are all found within the book’s pages. The Platinum Rule is also reviewed, which essentially says, “Do for others what they would have you do for them.”

He also writes that talent is overrated. He feels the notion of needing to be incredibly gifted to be successful is false, stating that anyone with a good work ethic can surpass those with natural talent and smarts.

“We talk about genius like it’s a rare thing to capture,” he writes, “but in reality, genius is simply the ability to solve problems in different ways, and to work hard to continue solving those problems.”

Brockner further encourages his readers by advising them to never stop learning from the people they meet, the books they read, from the vast information readily available on the internet, and from watching and listening intently to all that’s in the world around them.

In true Brockner fashion, Tobe Brockner takes from his grandfather, saying, “We think the impact we’re making on the world has to be huge—it doesn’t. The world is changed by those consistently doing the small things that matter over and over again, until it becomes the fabric of their character. You don’t need whatever you do to be big and splashy, or to be motivated by recognition. It’s those quiet moments in the trenches that build a community. It’s not any one big thing you do, it’s the thousands of little things performed in your life from day to day that really matter.”

Idaho Tech – Technology for Kids and Your Inner Kid