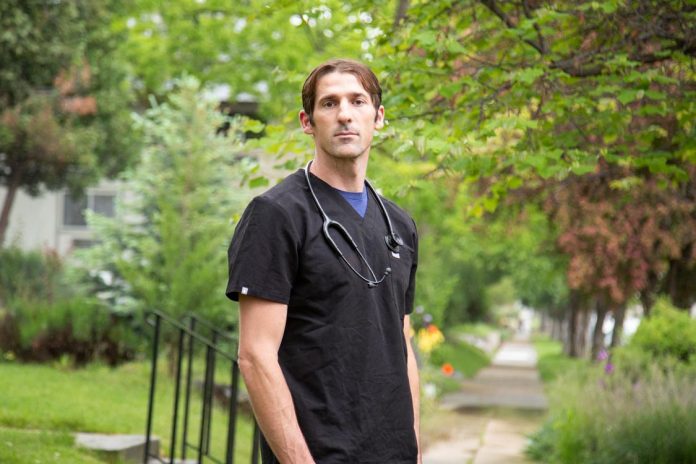 With seven years of experience as an ER nurse at St. Luke’s in Boise plus additional terms as a travelling nurse, Michael Bond knew what was coming when news of the COVID-19 outbreak began to spread. At the time, he was in a short-term contract working as an ER nurse at St. Luke’s in Twin Falls but that contract was coming to an end in April. Bond found himself in a unique position to go where he was needed most: New York City. Already having to distance himself from friends and family because of his work on the frontlines in Twin Falls, Bond and his wife agreed that having him thousands of miles away in New York might actually be less of a burden. So, once their decision was made, Bond left almost immediately.

Along with hundreds of other medical professionals from around the country, Bond joined the COVID-19 support effort through the Federal Emergency Management Agency (FEMA). He arrived in New York City on April 15 as part of the fourth wave of medical staff that had been brought in by FEMA.

After a day of orientation, he and the other new arrivals waited in their designated hotel near Times Square until the COVID-19 cases determined where they were needed. Bond was assigned a position working in the ER and ICU at Coney Island Hospital where much of the regular staff were unable to work, having contracted the virus themselves during the initial wave.

“I was prepared for the worst,” says Bond, “but by the time I got there, the Shelter in Place order was starting to have an effect and the number of patients in the hospitals was decreasing. Plus, there was more help coming in from all over the country, so it fortunately wasn’t the warzone scenario I had prepared for.”

However, many of the people Bond worked with had been there a few weeks earlier and were stricken from what they had experienced. Bond recounts stories from those who were part of the first wave, how they described the ER as being at quadruple capacity with beds in hallways, patients and staff all infected with COVID-19, and limited supplies and equipment which precluded staff from saving lives. At times they were operating under disaster triage which meant having to prioritize those who could be saved and let go of those who could not be. Those who were part of the second wave of medical staff told Bond their primary duties had been the safe removal of bodies.

Although it was a more manageable scene by the time of his arrival, Bond still worked with many COVID-19 patients. He specifically recalls a female staff member of the hospital who contracted the virus. What struck him most in her case wasn’t just her experience – going on assisted ventilation, her body not tolerating it and eventually deteriorating – but the way it impacted her friends and coworkers.

“We’ve all seen the numbers and it’s easy to dismiss them but behind each case is a great deal of people who have been affected by the loss of a friend or loved one,” says Bond.

After serving at Coney Island Hospital for a few weeks, Bond is now back home in Boise with his wife and two young children. He is no longer working on the frontlines and is glad to be laying low with his family for the time being. Like many of us, he’s cautiously optimistic that the worst is over, but is concerned about what the next few months might hold.

“After experiencing the gravity of the situation in New York, it was surreal coming back to Idaho where, because our number of cases is drastically lower, so many people aren’t taking the virus seriously,” Bond reflects. “And it’s unfortunate how divisive this has made everyone. It’s become so political. I think about all the men and women I worked with in New York and how inspiring it was to rally together and help as best we could. I hope as a community here in Idaho we can learn from that and all do our part, too.”

As we hope to mitigate the economic and social impacts of COVID-19 by slowly reopening businesses, it’s important to not force or way “back to normal.” From offices to restaurants to schools to travel… it’s clear that nothing will be the same as it was before. There will in fact be a new normal in all aspects of our lives. It is our responsibility as a community to follow the plans and measures that have been put in place and to support each other in the process, with Bond and his coworkers as a powerful example to us all.

To learn more about Idaho’s plans and guidance for our community, visit rebound.idaho.gov

Go Ahead and Jump