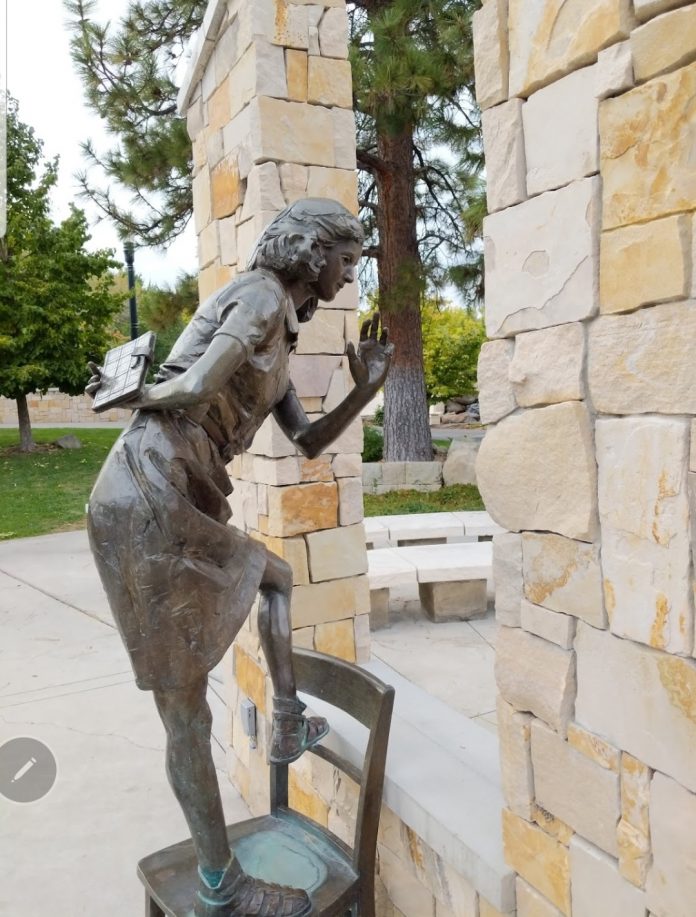 This is a lovely place to reflect. As a memorial for many who have spent their lives in pursuit of human rights, not only Anne Frank, the quotes are inspiring and thought-provoking from many angles. It is a major comment on, and compliment to, Boise that it was funded, built and maintained here. Beautiful.

Recognized as an international “Site of Conscience,” the Idaho Anne Frank Human Rights Memorial welcomes over 120,000 visitors annually.  Whether posted in an online review or asked onsite during a free docent-led tour, there is one reoccuring question: How did this happen in Boise?

There’s history behind the answer.

On the heels of a civil lawsuit closing an Aryan compound in North Idaho and a populace defeat of an anti-LGBTQ proposition on the state ballot, the traveling exhibit “Anne Frank in the World” was brought to Boise in 1995. In one month’s time approximately 50,000 people attended the exhibit.

While Nazi soldiers combed the streets below her hiding place, Anne Frank’s faith in humanity echoed on the pages of her diary.   And when the exhibit closed, the seeds had been planted to construct a permanent tribute.

The Wassmuth Center for Human Rights was founded in 1996 for the purpose of establishing a memorial to human rights. The educational park would be designed to engage visitors to think, to talk with one another, and to respond to the human rights issues we face in our community, our country and our world.

May the Idaho Anne Frank Human Rights Memorial stand as a tribute to Anne Frank’s memory, as a warning to any who would dare trespass upon the freedom of others, and as an inspiration to all whose lives are devoted to love, respect, understanding, peace, and good will among the totality and diversity of the human family.  May this memorial inspire each of us to contemplate the moral implications of our civic responsibilities.

After a six-year fundraising campaign, with donations received from individuals, businesses and foundations throughout the US, the Memorial was dedicated in August 2002 to be a shared public space.  Jointly maintained by the Center and Boise City Parks and Recreation, the acre along the Greenbelt is the only Anne Frank memorial in the United States.

In his National Geographic book Etched in Stone: Enduring Words from Our Nation’s Monuments, Ryan Coonerty commented, “Anne Frank could scarcely have conceived of Boise, Idaho.  Therefore it seems improbable that the author of a diary that has become among the world’s most widely read books has become a symbolic fixture of this community almost 60 years after her death.”

For as Anne penned on July 15, 1944, we are reminded that  “in spite of everything, people are truly good at heart.”

Dan Prinzing is the executive director of the Wassmuth Center for Human Rights.  www.wassmuthcenter.org ; visit the memorial online at www.annefrankmemorial.org

The Love Language of Gifts