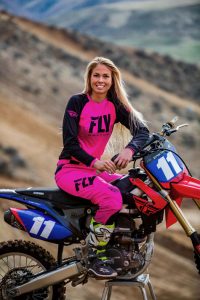 April Zastrow’s love of all-things-bike began at the tender age of eight, when she would frequent the local Owyhee Motorcycle Club track with her dad. “They had a raffle to win a little dirt bike that would be my size and I spent the whole day scheming with my guy friend on how we would share it if either of us won.” They didn’t win, but with the support of her dad and his friend, it wasn’t long until she got her bike and hit the track as much as she could.

At 15, Zastrow raced her first women’s pro race and soon after began racing the Women’s Motocross (WMX) National Pro Series. “After about the fifth year I took a little break, because my dad had cancer and I needed to be around for him. After he passed, I raced a few more years for fun, because I knew the WMX was coming to an end soon.” Zastrow feels grateful to have raced at a time when women had a successful program and series with MX Sports, the owner and producer of the world’s leading motocross championship. Eventually women’s races were cut from eight to three, and then eliminated altogether.

One of Zastrow’s fondest memories from her thirteen-year racing career was in the Supercross class for the X-Games. “It was the only time I felt like I was an equal and as deserving an athlete as all of the others from the way that the organizers and crew treated us.” In many extreme adventure sports, women are still working for representation and equality.  Sponsorship opportunities are fewer, making it more challenging for women to dedicate the time and resources necessary to advance their skills. This creates the chicken or the egg syndrome, with fewer skilled women to develop racing classes, and less visible role models to inspire upcoming female riders. “My advice is to still pursue racing to the level of your dream,” Zastrow encourages. “If you want to do it for fun, to push yourself, to be the fastest women of your era or to try and become successful in the men’s pro class. Just believe that you can do it and try.”

As a designer for Fly Racing, a local motocross apparel brand that is known worldwide, Zastrow was able to help guide the creation of MX gear for women.  She grew up riding in men’s gear where at the end of the race, “the pants would ride up so high my knee protection would practically be on my thighs.” Inspired, she obtained a degree in graphic design and has been with Fly Racing for ten years, ensuring race gear is designed appropriately for women’s curves.

Although she doesn’t frequent the race track these days, you’ll most likely see her surfing at the whitewater park, rock climbing at the local gym or ripping turns on her mountain bike in the foothills. “My boyfriend, Kyle, is a professional MTB racer/ambassador and has started giving me proper coaching on skills this year. We started a YouTube channel called “Kyle & April – Ride MTB” a few months ago with “how to” and “progression session” videos at our local bike parks and trails.” From motocross to design, surfing to mountain biking, Zastrow’s ultimate passion is to push her limits and spread the stoke far and wide.

Check out some of Zastrow’s apparel design at https://www.flyracing.com/ and sharpen those MTB skills at her YouTube channel Kyle & April – Ride MTB and https://www.ridemtb.com/