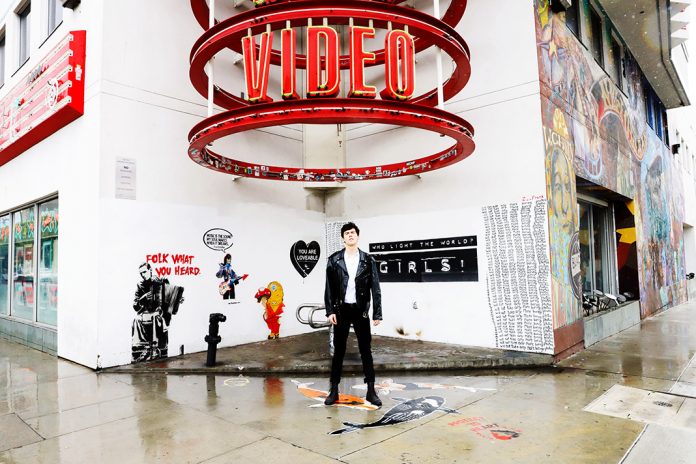 Finding Success From Idaho to LA
By Ana Lete  Photography  Kimberlee Miller
For 19-year-old actor and musician, Aidan Alexander, artistic expression through different mediums such as music, acting, fashion, and poetry always came naturally to him in the Idaho suburbs he grew up in. “I’ve been interested in music my whole life,” he said. “I constantly had headphones in from a young age.”
At the young age of seven, he wrote his first ‘song’ – “I don’t really classify it as a real song because it was only two lines long, but I was so proud of it that I sang it to everyone I knew because I thought it was so catchy,” he stated.
Later, at age thirteen or fourteen, Alexander got his first paid gig – a role acting as young Johnny in Bill Paxton and Luke Perry’s independent drama, Red Wing (2013). Since then, his passion for music and art of all kind – from acting to fashion to poetry – hasn’t ceased with the release of his latest singles, “I Don’t Love You” and “Melancholia”.
Between all of his artistic pursuits – music, acting, poetry, and fashion – the former Idaho-native said he  likes to keep himself busy in LA’s constant hustle-and-bustle.
“For me, every day is different from the day before,” Alexander said. “Some days, I have a lot on my schedule, and some days I only have a few things going on. Today, I spent most of the morning writing and listening to music.” When asked which artists have been on his playlist lately, Alexander said that he’s found plenty of inspiration in artists like Fleetwood Mac, Lorde, Banks, and recent “Album of the Year” Grammy-award winner, Kasey Musgraves.
Like many songwriters throughout history, Alexander said he prefers to start with lyrics first when he sits down to write a new song. “After writing lyrics, I’ll pick up a guitar or sit down at a piano in the studio to flesh out all of my song ideas,” he said.

For the 19-year-old songwriter, writing in some form, whether through songwriting, poetry, or journaling has always come naturally to him, “I’m constantly writing something – at home, in my car, on my notepad,” he said. “To be honest, I actually get a little stir crazy when I’m not writing.”
When asked if acting in dramas like Red Wing or writing poetry influence the songs he writes today, Alexander said, “Oh absolutely! Acting and poetry are big inspirations and definitely influence my songs. My songwriting is really just poetry in lyrical form,” he said. “There are so many forms of poetry… music is one of them.”
After listening to Alexander’s music, it’s hard to miss the reappearing themes of longing, nostalgia, and loneliness that weave their way in and out of his songs. In his third single, ‘Melancholia’ he sings, ‘My mom sounds on the phone, I’m the age I used to call old, my friends from school are leaving home.’ For Alexander, this is one of many songs he’s written that explore the bittersweet transition of growing up and missing the carefree comforts of youth and old memories.
“A lot of my songs are about longing, loneliness, and nostalgia for people and places,” he said. After a brief pause, Alexander mused, “I guess I love the universal nature and the drama in those themes. Everyone can relate to missing a person, place, or their fond childhood memories.”
But while Alexander tends to look back at nostalgic memories in his songs, he’s also grown immensely as an artist throughout the years. “Compared to my early songwriting days, every facet of who I am as an artist has changed. There’s so much growing and expanding going on no matter which creative environment I find myself in,” he said.
“When you listen to the music I wrote at 15 vs the music I write now, it’s completely different,” he said. “I think the more you live your life and the more life experiences you have under your belt, the more you have to write about – perspective is one of the biggest cataclysm to writing better songs.”
When asked what advice he’d give to aspiring singer-songwriters, musicians, actors, and poets, Alexander said, “I would say, don’t be afraid to put yourself out there. Success doesn’t come overnight, but if this is what you want to be doing, you should do it because you want to write music, not because you want everyone to listen to it or to make a lot of money,” he said. “In any facet of media, whether it’s music or acting, find out what you want to do and go for it. There are so many people who are still figuring out what they want to do, so if you already know, go for it!”

After talking to the up-and-coming LA singer-songwriter, it’s clear that he’s following his own advice. While every field has its set of challenges, Alexander said that his journey as a musical artist and actor has been, “way more fun than challenging so far.”
‘In the future, I hope to keep releasing singles and eventually release a whole album that speaks to people of all ages,” Alexander said. “At the end of the day, I really hope the people listening to my songs can find themselves in them.”
To learn more about Aidan Alexander and to listen to his music, please visit www.aidanalexander.me.