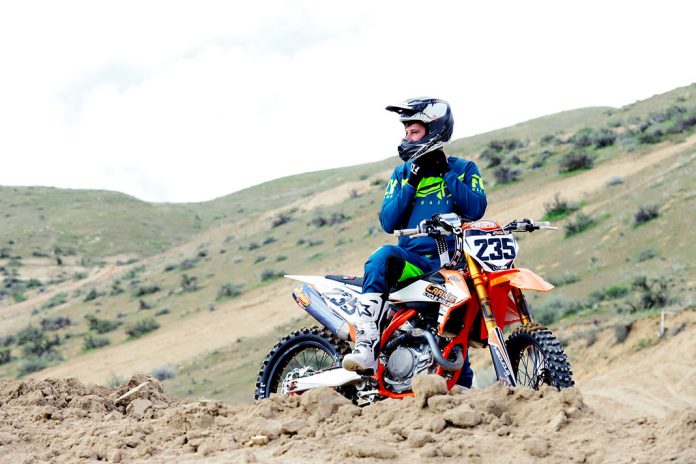 The once well-kept secret of Boise, and its access to some of the best outdoor playgrounds in the western U.S., has been out for quite some time now. The population growth is due to Idaho’s beautiful scenery, as well as the access to multitudes of trail systems, mountains, reservoirs, and rivers all within an hour’s drive of the capital city. For those seeking adventures closer to the city, one can find exceptional places to wake surf, climb, and bike. Today, some of Boise’s most notable outdoor athletes use Boise’s local settings to hone their skills to a competitive edge.

Ben Evans grew up riding on the Idaho soil his family molded into small motocross tracks on some of their empty construction lots. All the boys born to the family of builders grew up riding motorcycles suited to younger sect learning how to make their first dirt turns. Owyhee Motorcycle Club, just down the road from the old Simplot House, helped Ben and his brothers become proficient at navigating the sand berms, table tops, and whoops common to the sport. By age six, Ben was so proficient that he began racing. By eight, he was already showing his prowess in Las Vegas at the World Mini Amateur Nationals aboard his KTM.

Adopting the work ethic known to the Evan’s family, Ben began climbing the ranks of the motocross world by winning national races. By age 17, he raced the Four Stroke Nationals at Clay Peak, Idaho and won both the 250 and 450 pro classes. Ben Evans was quickly becoming a household motorsports name. Using the notoriety gained from his racing career, Ben began coaching local riders on improving their track speed and landing jumps safely. Today, Ben and his wife, Julia, plan on raising their young son Riley, as well as their newborn daughter, Ellie, in the same Evans family tradition of Idaho motocross as soon as they can sit on a bike.

Mike McClure was climbing around on rock faces near his home in Nampa as young as twelve. When he wasn’t bouldering at Celebration Park or Swam Falls, Nampa Rec Center’s climbing wall was a nearby location to improve his skills. After receiving a Bachelor of Science degree in Geology from the University of Idaho, Mike married Tammy, whose family owns and operates Indian Creek Winery. When the grape harvest of the seasonal wine-making business ended, and the off-season offered plenty of downtime to climb, Mike began exploring Idaho for additional rock faces. Some of these locations included the Elephant’s Perch, and more prominent aspects atop the Seven Devils, but Mike wanted the hidden gems. This meant scouring Google Earth for austere bouldering locations that required considerable hikes or overnight bivouacs.

Since he had spent a considerable amount of time bouldering at Swan Falls, Mike wrote and compiled a climbing guide book for the area detailing many of the bouldering routes. Any revenue generated by the book he planned to recycle back into the community via the Boise Climbing Alliance, which seeks to preserve climbing areas in their natural state. Just like Ben, Mike and Tammy hope their newborn daughter catches the climbing bug as well.

Heather Albert didn’t grow up in Idaho but spent many years crossing Idaho’s southern border from Utah in order to compete in some of the country’s most prestigious women’s cycling races. She became interested in cycling after graduating from Brigham Young University and ascended the ranks from a category 4 to a category 1 racer in an astoundingly short period of time. It took Heather only six months to maintain speed with some of the best in the sport. However, a few injuries kept her in and out of the sport over the next several years until she began racing in the Idaho Women’s Challenge on regular basis. Known as one of the best international stage races for women only, the Challenge lasts anywhere from five to fourteen days in duration and attracts some of the world’s best riders.

It didn’t take long for Heather and her husband, Uhl, to appreciate Boise enough to move here in 2002. A regular to Boise’s Twilight Criterium, Heather became hungry for more competition. In Europe, she raced against the best in the France World Cup, where she was one of the top ten finishers. In addition to competing in the Velodrome in California and Texas, Heather works with other female riders on her team – dubbed Hangar 15 Bicycles – in developing their talents. One of her favorite Idaho rides is the Emmett to Horseshoe bend loop, often pushing on to Ola to add hours more of road time. Seat time is critical when training for events as Heather and other riders need to spend twelve to twenty hours on the road each week in order to stay competitive.

Another Idaho Native is Jimmi Sparling, who, like a lot of Idahoans, learned to wakeboard behind boats on Lucky Peak Reservoir and Black Canyon near Emmett. Near the end of his teenage years, injuries were common, and wakesurfing had yet to emerge as a sport. In his early 20s, Jimmi began to surf behind modified wakeboard boats, loaded to bear with people for ballast. It wasn’t until his father purchased a Centurion boat in 2008, specifically designed for the sport, that wakesurfing became a regular activity. A year later, a surf shaper from San Diego moved his business to Boise and began creating boards designed to ride the waves generated by boats. Jeff Wahlers and his Soulcraft boards helped bring Jimmi to the next level. Armed with a Soulcraft sponsorship, Jimmi and his surfing wife, Kaley, travelled to Seattle to compete in the 1st annual wakesurfing competition, where he won 1st place in the amateur division.

When Jimmi made the leap to the pro division in 2011, he came up against stiff competition and was forced to reevaluate. To help with his efforts in 2012, Centurion Boats stepped forward and offered a sponsorship. With one of the best wakesurfing engineered boats towing him, Jimmi went on to win 2nd place at the World Wakesurf Championships in Las Vegas, Nevada. Jimmi and Kaley’s children, 12-year-old Madison and 9-year-old Jack Danger, haven’t caught the wakesurfing fever just yet but the family keeps them on the water enough so they might catch eventually catch it. After all, with Jimmi coordinating upcoming shoots for Centurion’s boat line in places in such locales such as Redfish Lake, its hard to deny a sport in a more beautiful setting.

While many of the athletes in the article have reached the pinnacle in their perspective sports, most Idahoans can appreciate the season that ushers in the long sunny days they use to practice and compete. As spring turns to summer in Idaho, we could very well find ourselves on the track, road, cliff or body of water next to some of Idaho’s best athletes catching some of the same thrills.

Frightened Felons is an annual event put on at the Old Idaho Penitentiary around Halloween. It’s a two night event and features a number of different activities. “It’s a party for history,” says Amber Beierle, Education Specialist and Visitor Services Coordinator.

For Boise Drummer Todd Chavez, the Beat Goes On