Cheers, Greenbelt! To 50 years past and 50 years ahead

From the grassroots efforts to clean up the river’s edges and create public access along the river in the 1960s, to the local modern makers who are helping us celebrate the Greenbelt’s 50 years, it’s the people with vision and ambition who make our vibrant community a place we love to call home. 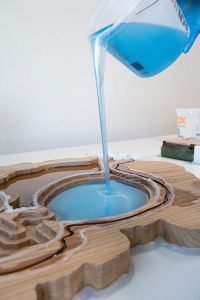 The 50th anniversary of the Greenbelt inspired WoodLab, a modern woodshop in Eagle, to craft this one-of-a-kind coffee table from urban rescued Russian olive wood. The design is an ode to the Greenbelt: a celebration of water and greenery. The ponds invoke Riverside Park’s expansive waterway, while the abundant green is a nod to the multitude of trees and parks along the treasured trail. The table itself is a collaboration that started as a lively chat between myself and WoodLab co-owner David Gosse and involved an in-kind donation of the wood from Russ, graphic design renderings by Matt Heim of John Ralph Furniture and Forge Signworks’ expert routering of the layered ponds and parks, along with the team at WoodLab, where eco-friendly resin was masterfully mixed, poured and sanded into the functional art piece it is today.

Last spring, a line of merchandise for the Greenbelt was created through the minds of the Greenbelt Magazine staff and Jennie Kilcup, a well-known watercolor artist, to benefit the non-profits keeping the greenbelt and rivers clean. The whimsically stickers and coffee cup designs symbolize activities along the greenbelt and Idaho life. The stickers are found at Re-pop Gifts downtown and the Boise Airport Greenbelt store, and the coffee cups at Idaho Made on 6th. 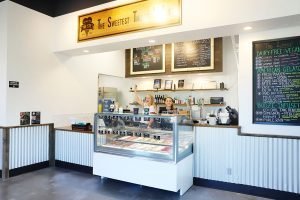 The STIL, a local ice cream favorite, is celebrating with a blackberry and salted dark chocolate combination. The blackberry vanilla swirled base with chunks of chocolate representing the wild blackberries that are along the Greenbelt path, the bark of the trees (dark chocolate) and the river rocks (salt).

The Chocolat Bar is another collaborator who created an artisan Idaho chocolate shaped cookie cutter filled with mint-infused white chocolate lovingly decorated with fun Greenbelt and Idaho inspired designs. The iconic chocolate store takes pride in high quality organic and local ingredients and these are delicious.

Its people like these that make treasured local businesses, that create the collaborative and creative community that we live in and love.

Telaya Wine Maker, Savory and Sweet and the Boise Boys came together for the shoot. 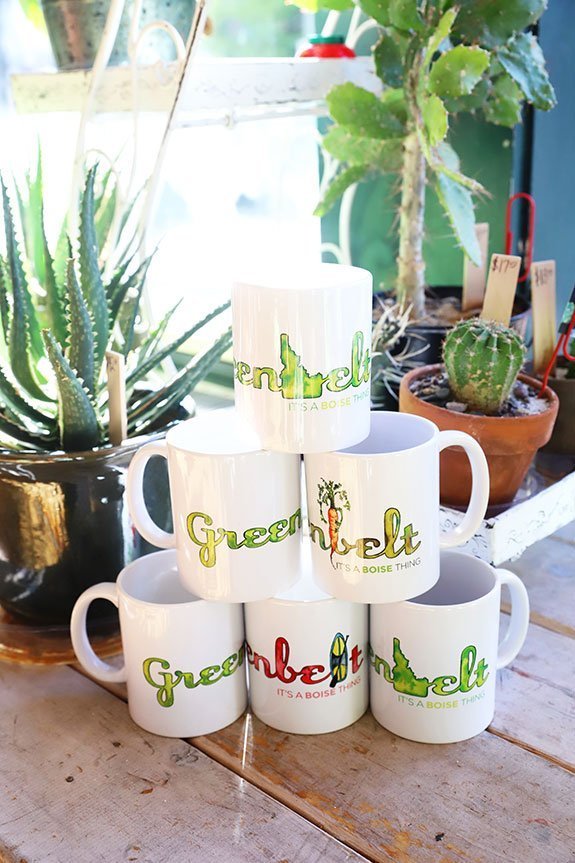 The Greenbelt is Born

The idea for the Greenbelt originated in Boise’s first comprehensive plan. The plan, completed in 1963, recognized that “Boise City has been favored by nature. Scenic surroundings of rivers, mountains, and dramatic civic beauty form an essential part of the Boise City heritage.” The plan recommended that the City acquire land along the Boise River to “create a continuous green belt of public lands stretching along the river throughout the entire length of the community.”

Soon after, Greenbelt planning gained momentum. The U.S. Department of the Interior awarded $100,000 toward the efforts, and a newly formed Boise Greenbelt Committee began purchasing land along both banks of the Boise River. Concurrently, Boise City Parks & Recreation, the Army Reserves, individual volunteers, and local clubs and community organizations started the process of cleaning up the river and clearing land donated to or purchased by the city.

The Greenbelt and Pathways Committee formed in 1969, which was tasked to oversee the development of the Greenbelt and ensure that the interests of both the public and the city were maintained in the path. This ushered in a pivotal moment for the pathway’s development; there was now a group dedicated solely to the Greenbelt. They experienced many wins and losses throughout the years, but eventually realized the dream of the Greenbelt. In 1998 they disbanded, the pathway at a point where it was engrained in city policy and in the psyche of Boiseans. One of the committee members, Tom Baskin, remarked in 1998, “Well, the Boise Greenbelt is, you know, a unique thing to Boise and it needs to be cared for and pampered like any living thing. It’s going to require our constant attention, devotion.”

The major stretches of the Boise River Greenbelt path developed incrementally between 1969 and 2016; the last unfinished portion in Boise was only finished three years ago. Ongoing maintenance continues to this day. The Greenbelt was a forward-thinking and monumental community effort, for which we owe our gratitude to those who made it happen. We all have a responsibility to maintain its valued place in the community and can help by commemorating its fifty-year anniversary this year.

What can you expect from the commemoration in September?

Join the City of Boise for a variety of activities September 19-21, 2019, commemorating the history of the Greenbelt. The festivities will kick-off at the Egyptian Theatre on Thursday, September 19, at 6:30 PM with an event hosted by Mayor Bieter. On Friday, September 20, a time capsule buried 25 years ago will be unearthed at Shoreline Park at 11 AM. Following the opening of the time capsule, walking and biking tours exploring the Greenbelt’s past will be hosted in the afternoon. To cap off the commemoration, on Saturday, September 21, there will be a fun run, a Food Truck Rally and Party, and then a  Free Jazz Concert at the mall lawn at Ann Morrison Park (NW of the fountain). The Greenbelt was not created overnight, and it can’t be celebrated in a single event! Click For More Details.

To learn more about the history of the Greenbelt or other aspects of Boise’s history, contact the author, bburns@cityofboise.org

Summer Sipping (in the winter) at Barbarian Brewing