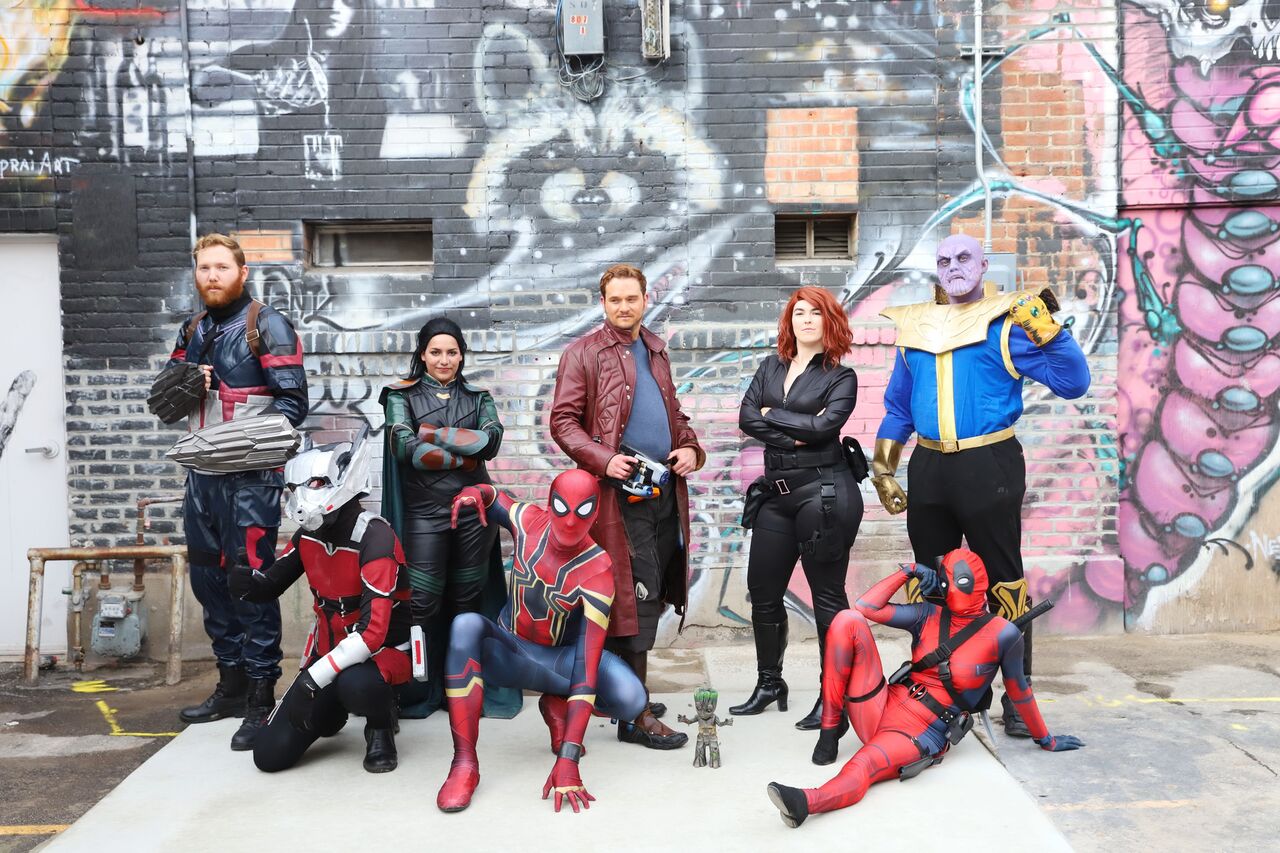 The Treasure Valley Avengers (TVA) crew can be found at comicons, events, and festivals all over the Treasure Valley and beyond. They want to “pass the torch of inspiration” to everyone. And they certainly are! It’s hard not to when you look that good!

I had the chance to chat with a few of the members and learn more about their cosplay lifestyles.

Brandon Waite
Have you always had an interest in cosplay?
“I think I was cosplaying before I ever knew what it was. There’s this story my mom likes to tell everyone about when I was very small, maybe 2 or 3, I decided that I was Dumbo The Flying Elephant. I wore all grey sweats and a yellow hat and carried a brown feather around. I refused to answer her if she didn’t call me Dumbo. I did that a lot with different characters as a kid, until my parents got me into theater at 9.”

Where do you get most of your costumes?
“Well, I’m an actor first and a cosplayer second. I’ve never met a sewing machine I didn’t break, so for most of my stuff I buy it from different places, usually Etsy. I’ll then modify or distress or

build things to add to my cosplays. My cosplay is more of an internal process anyway. For me, the costume is just there to show who I’m portraying, but the real transformation happens inside.”

I hear you are very talented at Jack Sparrow and Chris Pratt–do you do anyone else as well?
“For now those are the only two I have planned. In the past I’ve also portrayed Anime characters such as Trunks from Dragonball Z and Himura Kenshin from Rurouni Kenshin. Both Jack and Star-Lord are the type that can walk into a room and make it fun. Owen Grady from Jurassic World just kinda happened because I already had Star-Lord. I was asked to put a Han Solo and Indiana Jones together. I will definitely be portraying both soon.”

Kat Smith
How did you and the Avengers come together?

“I actually was hanging out at one of their houses while they were prepping and they needed a female character for a panel so they asked me, ‘Hey Kat what cosplay do you have for Marvel?’ and I said, ‘I have Pepper Potts and Black Widow which do you need?’ They told me, ‘We need a black widow you’re joining us.’”

Besides Black Widow, what other characters do you like to cosplay? Why?

“I do a lot. I do Peggy Carter characters from one piece, Disney princesses—I have the live action Bell ball gown, steam punk, Pirates of the Caribbean Elizabeth Swan, Mary Poppins, etc. All in all I’ve got a lot and there’s too many to count. I love doing it and dressing as these characters because meeting the characters as a child you get the sense of excitement and I want to give that to other people.”

Have you always had an interest in cosplay?

“I guess you could say yes. But in all reality I didn’t start in cosplay, I started doing rendezvous and historical reenactments and dressing for those at a young age with my grandparents when I was six years old. I love doing it and it’s just fun for me to pretend and act as a character in a group of people where they get excited in the kids enjoy it.”

How did you get involved with the TVA?

“I first met Brandon at a convention (Anime Oasis) in 2016. That was my first time going to a Con. I just made my “Amazing Spiderman” (screen accurate from the movie ‘The Amazing Spider-man’ staring Andrew Garfield) cosplay that year, it took me 5months to build and hand puff paint from head to toe. Once the Con was over I found a picture of Brandon and friended him on Facebook. A couple weeks later he puts a post out there asking if there are any marvel cosplayers that would like to put together a play. And my love for acting and my love for spider-man, put those two together and it was a dream come true for me!”

What are your other cosplays besides Spiderman?

“I do a Peter Parker cosplay. But I also have a Sith Anakin Skywalker Cosplay from Star Wars Episode 3. My Anakin is all handmade. Another Cosplay I do is P.T Barnum from the ‘Greatest Showman’ staring Hugh Jackman. Another I have is Kirito, from the Anime ‘Sword Art Online.’ I’m in the middle of building a DeadPool cosplay.”

How did you get into cosplay?

“I never really knew what cosplay was until I started building my Amazing Spiderman suit in October of 2015. I asked my friend over to help me on it when she ask if I was going to Anime Oasis [AO] next year (2016) and I had no clue what cosplay was or what AO was. So, she made me go and from day forth I had fallen into a deep love for cosplay.”

Where did you meet The Treasure Valley Avengers?
“I met the Avengers at a comic on in Oregon then steadily got to know them and joined.”

What are your favorite cosplays?
“I cosplay Gamora for the TVA as well and my dreams are to display Ulquiorra Cifer (Bleach Anime) or Rin Okumura (Ao no Exocist Anime). They are my favorite anime characters.”

What are your plans for the future?
“I would live to expand my acting. Maybe start a cosplay channel. My true dreams are to open up a daycare for pets or a coffee shop/bar.”

What are you doing this Halloween?
“For Halloween I am unsure besides taking my nephews out trick or treating. I planned on using Deadpool or Gamora.”

The Fantastic World of Jerusha Lauren