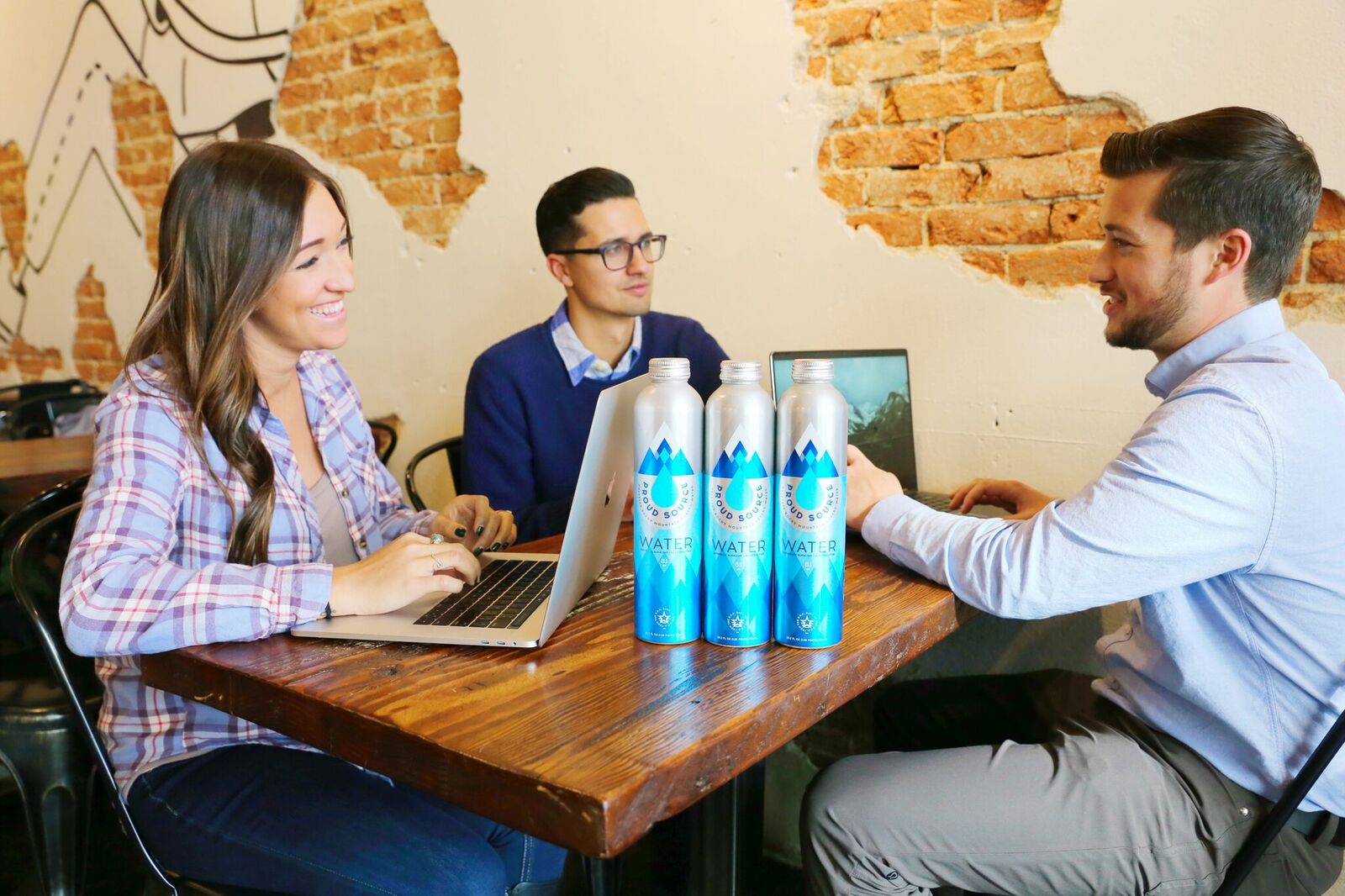 Mackay, Idaho—Both a lush and rugged terrain, nick-named the “top of Idaho” with its tall mountain peaks and beautifully expansive landscapes. Home to less than 600 people, but by no means small in spirit. The area was once a lively mining town, and while the mining industry is not as booming as it used to be, Mackay is still one of the friendliest places in the state, with happy residents and abundant wildlife. Many find that it is difficult not to smile when you’re nestled beneath the tallest mountain in Idaho, Mount Borah, standing at over 12,000 feet.
With their small population and such bountiful surrounding wilderness, the people of Mackay have found that they often have a surplus of resources. Resources that are now being sustainably shared with an incredible bottled water company: Proud Source Water.

Now the first thought that comes to mind when you think bottled water is not usually sustainability, but for Proud Source, that was the building foundation of their entire company. And while they’ve only been on the market for less than a year, the ground work for Proud Source began a long time ago. CJ Pennington, company president and founder, began discussing the idea of using Mackay’s streams to source their bottled water and spent months with both his partners and local officials, ensuring that this would not impede on the beautiful surrounding environment nor the quality of life for the people of Mackay. Pennington’s ideas were met with gratitude and Proud Source was born, named for “the pride of the people.”

In order to truly establish a sustainable bottled water company, Proud Source began tackling two of the big issues within the current bottled water market: packaging and sourcing. “We wanted to rewrite the narrative of what ‘good’ bottled water is,” says Pennington. And so, they have done just that.

More often than not, plastic bottles end up in a landfill, or worse, in our oceans or wildlife environments. Plastic degrades slowly and has an excess of toxic properties that can be harmful to our bodies and the planet. This did not fit the Proud Source motto at all. So, Pennington sought out alternative containers, which was not an easy task.

They toyed with the idea of glass and various metals, eventually deciding on aluminum. However, Proud Source is not contained within the traditional, run-of-the-mill aluminum can. But rather, it is a durable, rugged, re-sealable, and travel-friendly aluminum that is both stronger and safer than plastic. Aluminum is also much more easily recycled and reusable. So much so, in fact, that nearly two-thirds of all aluminum that has ever been produced is still in use today. For example, when a plastic water bottle is recycled, a percentage of that bottle is lost during the upcycling process, meaning that over time, less and less of the plastic is being recycled. But this is not the case for aluminum. Recycling aluminum saves time, money, and energy and can be reused over and over again, in all varieties of ways.

The second issue Proud Source tackled was the problem of unsustainable sourcing. A sizable portion of large bottled water distributers have been found guilty of simply bottling treated tap-water, which can be highly acidic and hard on the body. Others source their water from drought-ridden areas like California. These companies drain states of their natural, already depleted, resources. And while not all companies get their water from less-than-reputable sources, many bottle their water in other countries, which equates to long travel time for the water, stored in large, under-regulated containers, traveling thousands of miles to get to the stores.

For Proud Source, Mackay was a haven of untainted, naturally produced water. The partnership between the two became a match made in heaven. Proud Source brings employment and income to the small, Idaho town. And in return, Mackay allows Proud Source to bottle water from one of their many abundant springs, as long as it doesn’t impede their way of life and that the company remain sustainable in their efforts. Neither of which is difficult for Proud Source Water to do.

The entire premise of Proud Source Water is to “start a positive ripple effect” within the industry—to educate, to minimize their carbon footprint, and to provide high-quality, naturally alkaline water to Idaho and surrounding areas. And while, like most companies, they hope to continue to grow across the nation, they have vowed to purchase all their company supplies from the U.S., keeping dollars circulating within the economy.

Proud Source Water encourages consumers to educate themselves on ecological sustainability. Pennington hopes that their business model will inspire other bottled water companies to seek out more environmentally beneficial production and sourcing methods.

“Consumers create change,” Pennington states. If more people were aware of the incredibly unethical and environmentally damaging practices being used in many major bottled water companies, then they may be more hard-pressed to inspire change within these companies. But as it stands, Proud Source Water is proud of their efforts, proud of their source, and proud to be founded on principles that are safe for both our bodies and the earth that we live on.

It is imperative that we all, collectively, do what we can to take care of our beautiful planet. Even small steps toward making positive change are imperative for the longevity of Earth. Proud Source Water is shedding light on some of the wrong-doings in the bottled water industry, and they are taking measures to change that in all the ways that they can.

Proud Source Water encourages us to take part in the changing narrative within the bottled water industry. Proud Source is available in two different sizes, 16 oz. and 25. oz., and can be purchased online, and in over 1,200 stores including Albertson’s, Jackson’s, and many local retailers. For regular updates and information, follow them on Facebook, Instagram, and Twitter.

They stand by their sourcing and, as their bottle says:
“I have the future in my hands, literally. I am proud. I think ahead & give back. I am the source. The ripple effect starts with me. I am water. I flow & sustain. I will leave the world better than I found it.”

ABOUT US
Greenbelt Magazine aims to keep you informed about what’s happening in this great community of Boise, Idaho. Feature articles include interviews with local residents and business owners, culture, gourmet foods, recreation, real estate and local events. Readers will be consistently entertained, educated, and enlightened by each issue.
Contact us: tia@greenbeltmagazine.com
FOLLOW US
© 2020 Greenbelt Magazine. Website by Senze Digicraft
MORE STORIES