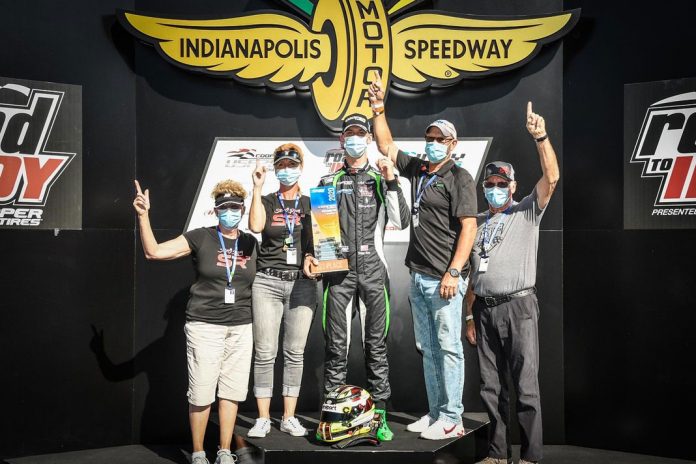 Success comes to the dedicated, the determined, the steadfast and strong-willed. For Sting Ray Robb, he is the definition of all of that and more. Devoted to his family, his faith, and the sport of racing, Sting Ray, (and yes, that’s his real name) has been on the tracks since his was a small boy.

“By the time I was 14, I’d raced everything from go-karts, shifter karts, Corvettes, K&N ProSeries Nascars, Dirt Modified cars, and open-wheel Formula cars all across the US and in 11 foreign countries. I ultimately found that my heart was in racing the open wheel formula cars which led me to the Road to Indy and this direct path to IndyCar,” Sting Ray shared with us.

Sting Ray was recently crowned the title of Indy Pro 2000 Champion, which comes with a full-season contract and a scholarship for future races! Sting Ray is incredibly humble, and even during our interview, he made it clear that he had not yet won the Indy Pro champion title, and then proceeded to win the race just over a week later! Congratulations Sting Ray, way to represent Idaho!

“My family has been very supportive of my desire to race from the beginning. My parents and grandparents have traveled with me, prayed and cheered for me at nearly every race so far. I believe that their amazing support has been key to my many successes and believe without them and the prayer and support of so many others, I would not be here experiencing this incredible opportunity. I will continue to trust that God’s plan is at work in my daily journey.”

Sting Ray knows the value of hard work and plans to finish off this season strong and continue to drive toward his dreams, “Once we enter the off-season I plan to participate in test sessions in the Indy Lights cars. I’ll be working to prepare myself both mentally and physically for the upcoming season to insure I’m fully prepared. Of course, I’ve got to work and earn some money as well so I’ll be working during the off-season as well.” And we would be remiss if we didn’t mention the fact that even while spending so much time traveling, racing, and practicing, Sting Ray graduated a year early from high school with a 4.2 GPA, while serving as class president, FFA officer, and as a leader in his church group. Talk about dedication!

He also pointed out that Idaho doesn’t have any formula open-wheel tracks anywhere in the state, so he has spent thousands of hours traveling by both car and plane to various locations where he practices and races. But at only 18 years old, and with all his many accomplishments under his belt, we wouldn’t be surprised to see the Sting Ray Robb Formula Open-Wheel Track opening up in Idaho sometime during his career!

When Sting Ray isn’t on the tracks (or driving to the tracks), he is soaking up the true Idaho lifestyle in our beautiful expanses of nature—mountain biking, hunting, fishing, golfing, and skiing. Learn more about Sting Ray and his journey on wheels on Facebook @stingrayrobbracing.