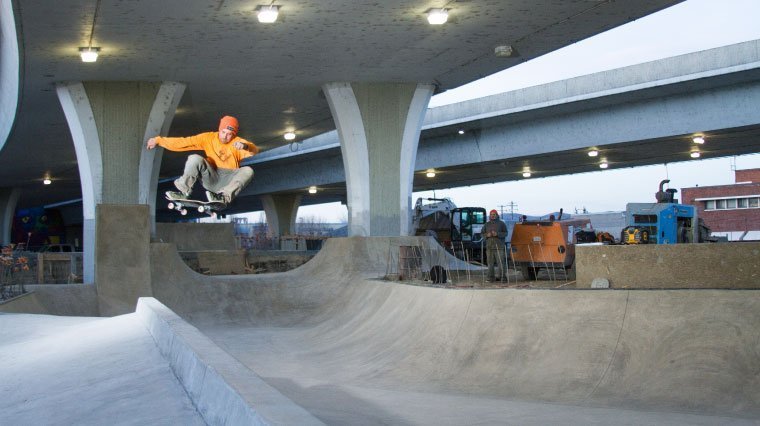 Rhodes Skatepark has been an iconic piece of Boise history since it was first designed in 1992 by former Ada County highway commissioner, Glenn Rhodes. While functional and still widely used, the park has been well overdue for renovations and after 24 years, Rhodes is finally getting some much needed restoration – boasting an impressive $1.25 million remodel. The original construction of Rhodes took over two years and Glenn Rhodes himself dedicated most of his time to pouring concrete and building fences for the project. He strongly believed that the youth of Boise would gain great benefit from the exercise and recreational use the park would offer, and he was certainly right about that.

About ten years ago, the Boise Skateboard Association (BSA) formed with the intent of streamlining the improvement and progression of the many parks in the area. Shortly after establishing the Board of Directors, it was decided that Rhodes was in desperate need of love and they began to hone in on the cause. Unfortunately, the road to the Rhodes remodel was long and it took a lot of community support in order to get adequate funding. The BSA started small – hot chocolate stands and local bars donating portions of beer sales – but in 2011, the Capital City Development Corporation provided the initial necessary funding to hire Grindline, a Seattle based building and design team that would be the catalyst in the Rhodes transformation.

With the inclusion of Grindline and their flawless design for the park, it became a matter of continuing to raise money in order to physically start the project. In 2013, a proposal was sent to the Tony Hawk Foundation and Rhodes was granted $10,000; while this didn’t build the park itself, it put Rhodes on the map and showed the industry how serious Boise was about the project. The BSA continued to hold events, fundraisers, and speeches to advocate to the community. In 2014, a $1.25 million dollar blessing came from the J.A. & Kathryn Albertson Foundation, and the remodeling began.

Representatives of the BSA held a presentation for the mayor and the city council, describing the many benefits that the Rhodes remodel would bring the city. Aside from the overall aesthetics that fixing the park would have, Rhodes is a safe place for exercise and activity, for people of all ages. Skateparks provide the social structure necessary for the formation of teamwork and collaboration that comes with the skateboard community. The BSA has plans to incorporate the YMCA and other national organizations; they want to start classes that teach children not only on how to skate, but how to do so safely. There is also the potential for a program in which kids can earn their own skateboard and equipment by helping out in the park and around the city. After the presentation, the City of Boise contributed over $300,000 to further fuel Rhode’s transformative remodel.

One of the greatest benefits to Rhodes and what it will bring to Boise is that it has now become a destination skatepark. With Grindline spearheading the building and production, Rhodes has put Boise on the map and is now one of the most sought after skateparks in the nation, primarily due to the fact that it is covered and lit. Rhodes is one of the few parks that provide shelter from the elements and allows for year-round skating. Grindline is a big name in the industry and has a reputation for creating monumental skateparks. The status that Grindline is giving to Boise will bring a stream of positive benefits to the local economy as people come from all over to skate the new concrete mountains of Rhodes Park.

Josh Davis, BSA member since 2012, is excited about all the potential that Rhodes holds for not only the skateboarding community but to the entire city. He looks forward to watching the progression of new skaters, as well as the continual learning for himself. The beauty of skating is that there is always a lesson to be learned.

“One of the cool things it teaches you is that when you get knocked down, you get back up,” says Davis. Being a father, he understands the importance of not only teaching children how to help others and work as a part of a team, but also the importance of perseverance. Skateboarding helps instill this mentality, to stay dedicated and determined in the face of any obstacle.

There will be no shortage of obstacles at the newly remodeled Rhodes. Grindline is including a wide variety of jumps, rails, down ledges, transitions, and even a ramp in the shape of Idaho.

Board Room skater Ronnie Geaslin has been skating Rhodes for the better part of a decade, and he can’t wait to try out the new park. “We will have a place to not only hang out at but a place we can call our second home. And the obstacles that the rebuild will provide aren’t going to be anywhere else in the Treasure Valley,” says Geaslin.

The park spans over 1.2 acres and will include a beautiful display from local artists on the walls and fences surrounding the area. The BSA has plans to host regular events at the park this summer and will be having a grand opening party in July with live music and entertainment. They will continue to raise money for the development of other parks and skate spots around the Treasure Valley. Rhodes Skatepark will be officially open late March or early April.