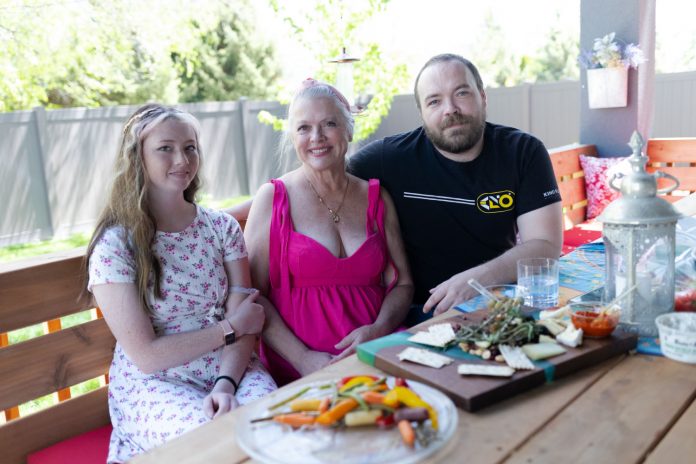 Chasing dreams and paving paths, the journey of a film family

“My exodus from LA started one day when I was on the Ventura freeway. The drive should have taken five minutes, but it took almost an hour. I did this every single day, and I thought, ‘I can’t do this anymore. I’m not going to spend the rest of my life living on a freeway.’” This is a common story today, but this was not 2022. This is the 1980’s. It was a time when if you were not in LA, you could not make it in the film industry. For Catrine McGregor, not making it was not an option. Her determination paved a new path, but what she had no way of knowing was who would walk down that path with her one day.

Catrine has been working as a Producer and Casting Director in film/TV/commercials/IMAX for over 40 years. She is also the winner of 3 Codie Awards for video games she produced starring the likes of James Earl Jones. Catrine attended Loyola-Marymount University. “Filmmaking was never a dream of mine. I had friends in college that were into film and they didn’t have the organizational skills, so I started producing.” She worked hard and became driven to succeed during a time when few women took on the challenge. Finally, Catrine got her shot and was hired on the set of 1974’s Carrie.

After Carrie, Catrine worked for Disney and Warner Bros and the next big opportunity was Blade Runner. She credits her professional success to the opportunities she had to observe and learn while on set. There was a clear structure to successfully making a film and she meticulously followed it. She says, “Times were different. It was easier to learn because there was such a clear chain of command and a sort of apprenticeship program. You didn’t just show up on set and attempt to do it right – you learned every element of the job and did it right, or you were never hired again.”

She recalls the story of a friend and fellow Boise filmmaker, Robin Meier, making her way up the ranks of film. Robin is now a writer and script supervisor, but like all filmmakers, she had to start low on the totem pole. “The first few movies she worked on were studio movies, and she was a production assistant (PA). When you’re a set PA and the assistant director (AD) yells ‘Quiet,’ you echo ‘Quiet.’ She learned this. When the AD said ‘Quiet,’ she said ‘Quiet.’ On either her third or fourth film, she was hired on specifically as a wardrobe PA. She was on set and hadn’t even met the Costume Designer yet, who was the head of the department. The AD yelled ‘Quiet’ and Robin yelled ‘Quiet.’ The Costume Designer turned to her assistant and asked ‘Is that woman on our team?’ The assistant said ‘yes’ and the wardrobe designer told her to fire Robin.” When asked why her friend was fired, Catrine simply explained, “The wardrobe department doesn’t yell ‘Quiet’.” Julien McGregor, a director of photography (DP) and an AD, chimes in with, “It’s not their job.” Catrine adds, “That’s how strict it is in a professional environment.”

After over a decade of work in LA, sitting in hours-long traffic, she was done. Not with film, but with wasting her life in a car. She wanted more. She wanted a family. She wanted a life. Catrine McGregor packed her bags and moved to Utah. She knew there was work for her in there, albeit not as much. “I got a call from some guy named Robert Redford,” jokes Catrine. “He asked me if I would cast a film for him in Utah. I waited .0002 seconds to say something like ‘Yes’ or ‘Duh,’ or something like that.” Catrine created a successful casting company, but there was more she had to give. She wanted a family, a child of her own. Finding out she was not able to bear a child was a devastating blow, but she was determined to have her family. After so much hardship, Catrine was finally blessed with a bundle of joy with whom she could share her endless love.

Julien McGregor was brought into ’s life in 1988. She never imagined taking a break from her work or family life. She shared her love of motherhood with her friends and colleagues. “When Julien was a week old, he sat in on the casting session for a movie called China O’Brien and everybody remembers it. The business I was in allowed me to take him in and I was with him a lot.” 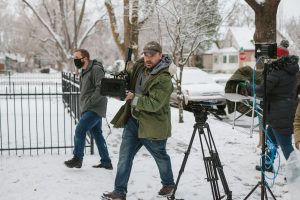 Julien McGregor grew up off and on set. His first audition was for the Green Day music video Good Riddance (Time Of Your Life) and he got it. It never occurred to him that his life was strange or different until he was older. Julien recalls, “Like my mom, I wasn’t really into making films. I had done some acting, but I didn’t fall in love with it. It wasn’t until a friend of mine needed help with a music video. That’s when I fell in love with being on set.” Being behind the camera became “life” for him.

Julien has been working in the film industry since he was 18 years old. “I started as an intern, doing PA work on sets like It’s Always Sunny in Philadelphia, Hell’s Kitchen, and Entourage.” He took a break for six years to join the Army but felt the pullback to film. Six years is a long time to take a break in the film industry, and he had to start over. Julien recalls asking his mother about getting work and the advice she gave. “Find another job. It’s a hard life.” Advice he would later give his daughter.

Julien did continue his work in film and followed his path to becoming an AD, then a DP, and has even directed.  He remembers the conversations he has overheard about him, as he worked his way up the ranks. “It hurts to hear people say, ‘Oh, he was hired because his mom’s important.’ They didn’t understand our working relationship.” Catrine chimes in, “I brought him up with the work ethics I had. If he didn’t pull his weight, that would come to an end quickly.” Julien smiles, “She would fire me. I thank her for that.” Julien understands the work that is needed to make a film. He raises his six children the way he was raised. They understand the behavior expected of them when they come to set and if they choose to work in the industry. 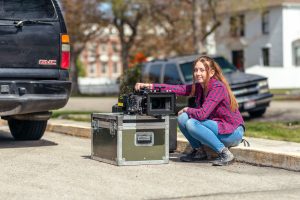 Julien’s 16-year-old daughter, Mikayla McGregor, has chosen to work in film as well. She got her first taste of film when she was 10 years old, and she was hooked. She has already been in commercials and independent films as an actor. Though they were small parts, she fell in love with acting. “It was fun and exciting. I love watching the actors and crew work. It’s cool seeing how a movie is made.” Mikayla started to intern as a PA two years ago. When asked about her experiences, she smiles and says, “It’s hard work, but it’s fun.”

Julien is proud of his daughter, but he also knows how tough this industry is. He shares with us his feelings, “I’m absolutely harder on her [Mikayla McGregor]. It’s a lot of tough love and you have to be thick-skinned. The industry is not going to be kind to you. If you’re easy on your kids, you’re not doing them any favors.” Catrine adds, “And she takes it.”

With film evolving so drastically throughout the decades, you would think the processes would change. You would think that what you teach someone about filmmaking would change, but it is still the same. Julien states, “The change from film to digital made things better, but worse.” Catrine agrees, “Now there’s more of a lackadaisical attitude, that you couldn’t do with film before. Back then, five minutes of shooting would cost $5000.” Julien adds, “Because of digital, you see a lot more collaboration on smaller films. It becomes confusing as to who’s doing what job. As a department head, when something goes wrong, it’s your reputation on the line. It’s not the reputation of the  PA, who is trying to give you advice.” Catrine explains, “You learn to stay in your own lane. I couldn’t imagine, when I was the assistant to the assistant to the extras casting director on Blade Runner, going up to Ridley Scott and giving him advice.” Julien adds, “The more money involved, the higher the stakes. You stay in your lane, so the film doesn’t collapse.” These are lessons the family has learned through their experiences. They pass these lessons down from parent to child as a key to success. No one wants to watch their child struggle, but they all have learned that the struggle is what has made them stronger.

Three generations of filmmakers, all walking down a path, initially paved by the first. Each exploring for themselves. Each creates a new path for the next. Their love for the art of moving pictures flows through their veins. Each understands the hard work, discipline, and dedication it takes to work in the film business. Catrine leaves us with a bit of wisdom, “Everybody thinks it’s so glamorous, but the only thing glamorous about show business is telling people you’re in it. The reality is its hours upon hours of long, hard work.”