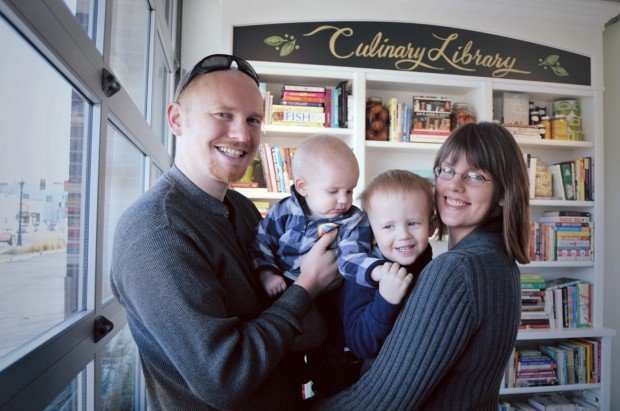 Once upon a time not so long ago, there lived a handsome Prince who wore the uniform of a man in the United States Air Force. While he had not yet met his Princess, she would soon find him, as all good fairy tale romances have happy endings.

In real life, Erin Whitt met Neal Timmerman at a barbeque, not long after she arrived at her first duty station on McGuire Air Force Base. She was in the middle of a conversation when, all at once, her eyes fell on the man of her dreams.

In her own words, “Our eyes met and the crowd parted, just like in the movies.”

She quickly made her way to his side, and the two chatted the rest of the evening. From that day on, they were nearly inseparable. Unfortunately, their honeymoon romanticism was interrupted when the inevitable occurred: Neal was deployed to Iraq, and he was taken away from Erin for the next five months. The new couple wondered if their dreams would end before they even started.

Over the holidays, Erin refused to celebrate. She kept Neal’s room decorated for Christmas, and left their presents unopened. As weeks stretched into months, the couple connected via email, with a few phone calls here and there. Occasionally, Erin could hear sirens as the overseas base came under attack. Neal couldn’t fake a dinner call for those warnings! Erin’s job back home was training others for emergency response, including base attacks, and she knew the signals by heart.

Finally, the day came for Erin’s Prince Charming to arrive home and finally celebrate in all the festivities he had missed. During the course of the evening, he knelt on one knee and presented Erin with a small, black velvet box. Her heart jumped, and she grew very excited. When she opened it, however, she found diamond earrings instead of the ring she had hoped for. She was stunned.

“How could he do this to me?” she thought. While she sat there with her mind in a whirl and her mouth agape, out came the ring from behind Neal’s back. The earrings went flying across the room.
“I have no idea where they landed,” she said, remembering the day with joy. She excitedly agreed to become Mrs. Neal Timmerman, “and the rest is history.”

Part of that history includes the newlywed couple moving to his home state of Idaho, and taking over his family’s business, M2 Automation. This was a new experience for Erin, but she settled gracefully into her new role as wife and business owner. Her military experience had given her insight into security on a larger scale, and Neal’s specialty electrical troubleshooting for the base gave them time to work together, and prepared them both for much of the business operations.

Today, the Timmermans have two boys, Quinten – age 4, and Greysen – age 2, who often play quietly while the M2 team plans new marketing strategies, or discusses the latest in commercial fire and security systems. Of course, there are often refreshments handy to keep the kids at bay. M2’s next generation owner, Quinten, already has his own entrepreneurial ideas. He plans to start a donut business, he tells me.

“I will use the M2 team,” he says matter-of-factly.

No Fish Out Of Water