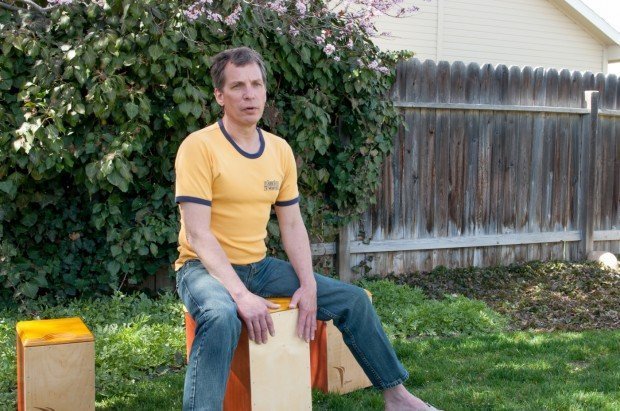 Thinking Outside of the Box of Musical Instrument Design

With deliberate and confident strokes, Boisean Todd Chavez taps, hits, raps, thuds, slaps, and thwacks the wooden box he is perched on.  The steady, rhythmic beats of his hands begin to stir your feet as he pounds out his percussive improvisations on an 19th Century Peruvian instrument called the cajon.  Meaning box or drawer in Spanish, over the last decade or so the cajon has been taken up by musicians world wide, first as a street performance drum and now as part of stage orchestras, bands and recording studios.

Todd, a drummer by musical background, came to the cajon through his various associations with kindred musicians.  While playing at a festival, he was introduced to woodworker/guitar maker extraordinaire Bryan Connington who was building cajons and proposed to Chavez that he try one out.  He did and immediately took to it’s distinctive timbre and portability.  With only brief experience on it, he decided on the cajon as his main instrument for a UK tour that would involve weeks of travel by rail.  What became evident early in the tour was this; the cajon is a remarkable box of sound but pretty tough on the hands after a couple hours of playing.  In particular, the bones in his palms and his thumbs took a lot of punishment due to the squared off corners and straight top rim of the forward part of the cajon.

Returning from his European excursions, Chavez went to work making a number of nuanced modifications to the cajon.  The result is what he calls a curved cajon, the top forward edge of the instrument now being aggressively rounded and sporting a depressed area, called the thumb glide, in the middle where the player’s thumbs land.  One glance, even by the uninitiated, and it’s obvious that this is a major relief for what was otherwise a hand-numbing pursuit.  And, the improvements didn’t stop there.  Most modern-day cajons feature a snare on the inside that produces a light threshing sound behind the drum’s “tapa” or striking plate, giving each tap a broader tone.  For those times when the sound of it might detract from a particular arrangement, Chavez’s snare is easily removable by simply opening the hinged top and pulling it from its mounting plate.  Held open by a cloth cord, a choice that eliminates any sound a chain might otherwise make, the interior becomes a bin to hold other items while traveling, more often than not a microphone that is used by most players to add volume and distinctive sonic qualities.

What started as a few mods for his own purposes has become an emerging business, and Todd is selling his cajons to an eager audience of drummers.  The instruments are elegant and well thought out.  Built primarily of birch plywood, the craftsmanship is excellent, as well.  Aside from a couple of local Treasure Valley music stores, Todd has taken a direct sales approach with his business.  His website, www.chavezcajon.com, is a catalog of his range of drums from large to small depending of the drummer’s size and age.  There are links to videos where you can watch and listen as Chavez plays.  Todd is patenting the design and sees the opportunity to fill out his product line with accessories to enhance his cajon and make it suitable for different styles of play.  From the early success Chavez is having, it seems that you can’t beat a cajon when becoming a musical entrepreneur.