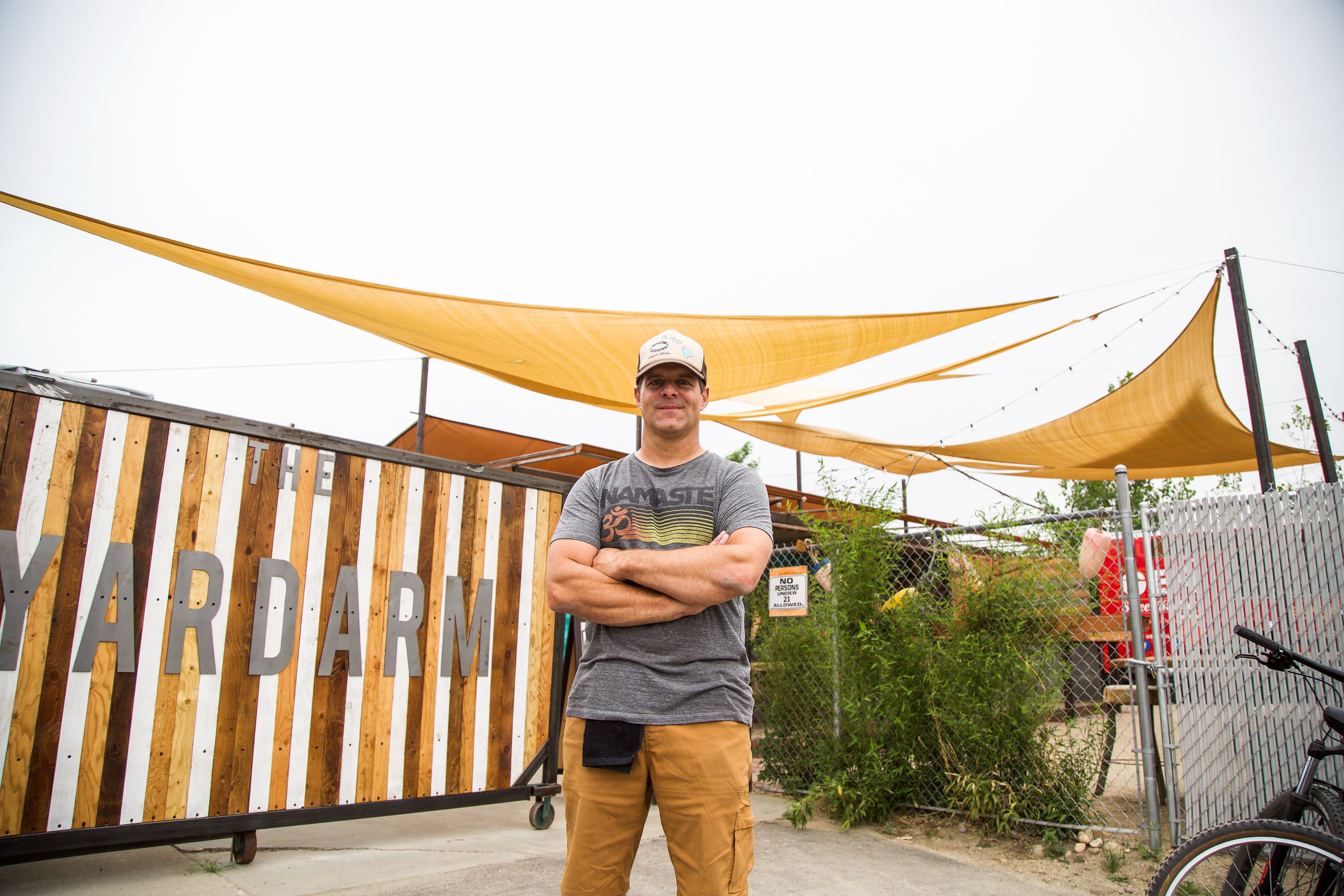 yärd-ärm: the outer extremity of a ship’s yard. When the sun is over the yardarm, it’s time to start drinking!

Nestled in Garden City next to Whitewater Park and a stone’s throw from the Boise Greenbelt is The Yardarm—a fully up-cycled bar with a surfer’s beach vibe that will transport you to a tropical oceanfront location in the matter of seconds. From the minute that you sit down on one of the handcrafted, wooden bar stools and dip your toes in the ‘sand’ (it’s actually decomposed granite, so it’s less likely to stick to your feet) you’ll be hooked!

The first of its kind in Idaho, The Yardarm was built from an old shipping container. The concept for this unique bar was born over beers between the two partners, Guy Midnight, who managed bars for years, and Victor Myers, the owner of the Corridor Surf Shop next door. With the completion of Whitewater Park, Idaho finally put itself on the map as a surf spot. Once these boys were done on the water, they felt like something was missing…beers–and a sandy spot where they could relax!

The two friends decided to make this concept a reality. They curated some up-cycled materials and got to work building The Yardarm. Practically everything been repurposed, with refreshing ingenuity and environmental awareness. The walls were built from recycled surfboard foam. The entire bar top was crafted from a fallen bridge beam relic found in the Boise River. The tables are salvaged wood from beetle-kill pine.

The Yardarm’s opening day was on August 12, 2016, and business has been booming ever since. The entire bar is outside, so the Yardarm is open during “hoodie weather,” from spring to fall. Their hours of operation are totally dependent upon Mother Nature, so it’s wise to check their Facebook page before hitting the sand.

Their fare is upscale street food taken to a new heights—like carnitas fries, fish tacos with Baja Brussels sprouts, or asparagus with aoli—from Gem Street Kitchen, their on-site food truck. Their motto is “Farm to Street,” promising locavore, quality ingredients for all their innovative dishes. Gem Street is the perfect accompaniment to The Yardarm’s local, rotating craft beers and regional wines. All of this converges with the backdrop of periodic, live music and the best roofless view in town to watch the sunset.

Midnight has managed several local spots in Boise, including Bittercreek, the Reef, Red Feather and Parilla Grill. Once the idea came for The Yardarm, he was ready to be his own boss and create something unique to Idaho. “I didn’t do this to become rich,” Midnight admitted. “I did it to support my family and have a good life.”

During the off season, Guy and Victor take time for their many other hobbies and ventures, which usually involve hitting the waves in tropical settings while traveling the world.

Midnight said he plans for the Yardarm to remain a fun, funky place to enjoy the warm seasons with a refreshing beverage and simply forget you’re not beachside.