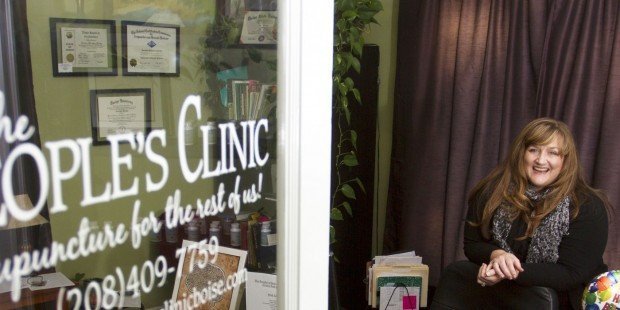 The People’s Clinic brings traditional Chinese Medicine to the rest of us.

The People’s Clinic celebrated its fifth anniversary this past November. Since 2008, they have made acupuncture affordable for “the rest of us.” The clinic’s founder, Donna Selle, started the clinic because she was frustrated that so many people—including her closest friends—could not afford her treatment rates.

For the uninitiated, acupuncture is a traditional Chinese Medicine that uses tiny, usually painless needles to stimulate pressure points that catalyze the body’s natural ability to heal itself. For example, a point on the wrist helps with nausea. The needles are hair-thin, virtually painless, and so light that they flutter with your pulse.

Acupuncture is gaining popularity all over the United States, and right here in Boise. It treats everything from allergies to nausea to chronic pain—without side effects (the only side effect is the risk of falling asleep).

But it can be expensive. And many insurance companies do not reimburse for the “alternative” treatment. Selle explains that only about 10 percent of the population can afford the usual rate of private acupuncture (up to $90 per treatment). “There’s this vast, swath of people in America, just like you and me, who are getting lost in the cracks of healthcare. Those people normally wouldn’t be able to receive acupuncture,” Selle says.

Which is a shame, because acupuncture is so simple and so cheap: 1000 needles cost $23. Treatment lasts on average an hour, but the acupuncturist is only needed for a ten minute discussion and needle placement at the beginning and for removing needles at the end (2 minutes). That leaves fifty minutes to offer treatment to five more people, making it—in theory—the ultimate affordable healthcare.
Selle learned about a community acupuncture network (now called People’s Organization of Community Acupuncture, or POCA), a series of clinics offering group treatment on a sliding scale. The network offered courses to acupuncturists on how to create affordable clinics. Selle took the course in the spring of 2008, then moved home to Boise and opened The People’s Clinic that fall. “It was a service that this valley needed,” Selle explains. “There’s not a person it doesn’t belong to.”

An early 19th-century building near Hyde Park houses The People’s Clinic. Patients enter up a staircase and relax in one of two soft-lit, faintly lavender-scented rooms, each with four giant reclining chairs. People receive treatment fully clothed because it’s done below the knees and below the elbows and neck.

Selle hired Gretchen Huettig who, like Selle, had received her M.S. degree in Acupuncture from Bastyr University in Seattle. Then Stacey Kelsey, fresh from three years’ of internships studying acupuncture in Portland and China, joined the practice.

The People’s Clinic has offered 25,000 treatments and is growing as new patients are turning to acupuncture to help heal their health problems or maintain their health. And next on the agenda? “We’re hoping to start an acupuncture school through POCA,” Donna says. “It would be great to offer affordable training.”

Find out more at www.thepeoplesclinicboise.com. Treatment is offered Monday through Saturday on a sliding scale of $15-$40 per session.