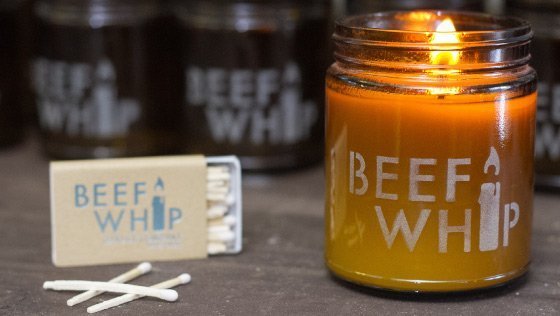 Keith Tracy and his wife, Kelly, are self-described “candle nerds.” But the success of their BeefWhip Candle Company may owe more to the “after work” efforts they’ve put in for years as they’ve balanced busy jobs with their business dream. Keith is a bartender who spent three years helping to launch a now-hopping (pun intended) craft brewery. Kelly has worked in a popular downtown Boise restaurant, and has also been a personal assistant and nanny. The couple drew on their experiences working in fast-paced environments to expand their business during the holidays—and they’re prepared for more.

In a world filled with scented candles, BeefWhip Candle has found a niche that’s promising and fun.

The business started with the couples’ personal experience. They like to burn candles in their north Boise home. Keith felt underwhelmed by a fairly expensive candle he purchased, so he started researching how to make his own. He bought a little bag of soy wax and some other inputs and started experimenting. “Kelly was a little hesitant at first, but support from all our friends and our Kickstarter campaign gave us confidence,” Keith said. Their online crowd-sourcing successful campaign via Kickstarter ran from July 31 through August 30, 2015, funding supplies the business used to get up and running in September.

“Once I saw how great the product was and the fun ideas Beef came up with, I realized we had something great,” Kelly said.

The company name is a reflection of their partnership in love and life. “Beef” is a nickname Keith picked up during his days tending bar at Bittercreek Alehouse in downtown Boise. Friends called the couple “BeefWhip” when they were dating, incorporating Kelly’s maiden name (Whipple). Beefwhip’s scents have unique and sometimes slightly risqué Idaho-inspired names, including “Grandpa’s Cough Medicine,” with whiskey and balsam. More romantic choices include “Her Tulips on My Tulips,” which fills the room with the scent of fresh tulips, long before spring.

“We are excited with the response,” Kelly said when we spoke in early December.

BeefWhip makes all-soy-wax candles by hand and sells them online at beefwhipcandleco.squarespace.com, at events and at Mixed Greens Modern Gifts, Payette Brewing Co. and the Press & Pony bar. Keith also goes to Bittercreek Alehouse twice a week to recycle and remake low-power candles for happy hour.

Given that the candles take a fair amount of time to produce, one early challenge was to deliver enough units for the holidays, according to Keith. Their first priority was to make sure that they had a product that people would enjoy placed on shelves during the holidays.

And their candles aren’t just for women.

“Guys enjoy candles, too,” Kelly said, adding she has seen sales “all over the board” demographically as she focuses on marketing, event participation and social media.

By late 2016, BeefWhip aims to open its own storefront and hire a part-time employee to help with production, though Keith plans to continue supervising the production line to ensure that the product is top quality. “It’s great to share what we love,” he said.

A Trio of Visionaries

Flowing On The Idaho Rivers Story