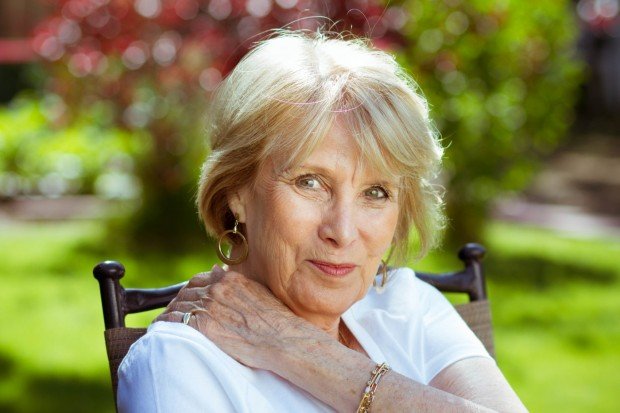 It should come as no surprise that one of British actress Jane Merrow’s favorite roles is “Alais,” the mistress of King Henry II, in the film The Lion in Winter (1968), in which she co-starred with Peter O’Toole, Katharine Hepburn, and Anthony Hopkins. The role earned her a Golden Globe nomination as Best Supporting Actress. Merrow has performed in over 80 film and television projects, as well as on stage. One of her favorite stage roles is “Hilary”, in a James Kennaway play she did in London. “Country Dance was a wonderful play about three people, Hilary, her brother, and her husband. Brother has an unhealthy love for Hilary, and he is jealous of Husband. [Brother] is witty and clever. Hilary loves that about him, but she loves her staid, steady husband. Their relationship is like a Scottish dance, intertwining and changing partners,” says Merrow. The role of Hilary helped her get the part of Alais in The Lion in Winter.

One of her favorite TV roles was Julia, in George Orwell’s 1984, created for the BBC. Another favorite TV project of hers was Secret Agent, with Patrick McGoohan.

What brought this British born actress to Boise six years ago? Despite her many roles as an actress, the best role of her life is here: she is a grandmother to Brynnli, 12, Kaden, 8, and Luke, who is nearly 3. Besides London, Merrow has also lived in Los Angeles, Las Vegas, and even in Australia for 3 months while doing a movie, Adam’s Woman, with Beau Bridges.

Since moving to Boise, Merrow has been active in the filmmaking community here, producing several short films in a series called New Chilling Tales, based on classic horror stories. The first, Beware of What You Wish For, was based on The Monkey’s Paw by W.W. Jacobs, and was filmed in the U.K in 2009. Three of the short films were produced in Idaho: The Tell Tale Heart, a short story by Edgar Allen Poe, starring Darren Burrows of Northern Exposure, was made in Boise. Merrow plays the Woman in The Yellow Wallpaper by Charlotte Perkins Gilman as well. Ambrose Bierce’s The Damned Thing features an animated creature created by local visual effects artist Dustin Montierth.

Merrow explained her reasons for creating New Chilling Tales: “I am an actor and my career was somewhat stalled and I decided that I would create my own work…more fun, more control and quicker than making a feature. I had fallen in love with the Internet and could see its potential for delivering films to an audience.”

Recognizing that many people love horror films and there are many short classic horror stories in the public domain, Merrow found her niche and her new passion. She is working on getting the New Chilling Tales series out into the global market.

Merrow discovered Idaho’s film community when she joined Idaho Media Media Professionals, which she says, “has helped me meet many interesting people and get this new phase of my work going.”

Merrow has some advice for aspiring actors: “Be prepared. Always learn your lines, build stamina, and be prepared for disappointment and rejection.”

To filmmakers, Merrow offers these words of wisdom: “Bear in mind your public. There is no point in making a film nobody wants to see. That’s why I’m tying into stories people love to read.”

To learn more about Jane Merrow and New Chilling Tales, visit her website at www.janemerrow.com.