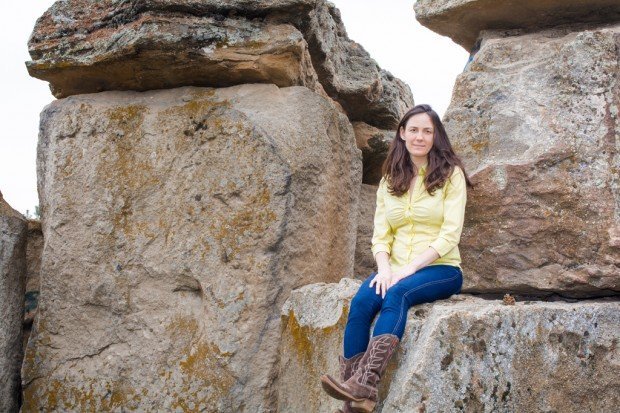 Admittedly, I am not a huge poetry fan; so I began reading McKetta’s book with a
Scrooge-like skepticism, “Poetry; bah, humbug.” However, as I turned the pages
I found that one finely crafted poem lead to the next and soon felt as if I was being gently rocked by the cadence of her words. It was as if McKetta’s poems whispered themselves to me and I was swaddled in loveliness.

It could be the overwhelming love of being a mother that seeps out of so many of her works, or the ability to captivate her readers with eloquent and subtle phrasing that caught me. Either way, this lovely collection may seem delicate at first, but the heart is pure strength.

McKetta has a welcoming and easy spirit. She is one of those people you want to sit down with and talk to at length. She speaks quickly, but with the same grace that is found in her poetry. The pure excitement she gets from talking about writing radiates. While she confides that she is most confident writing essays and poetry, she “traffics in all forms of writing as a playwright, poet, fiction writer, and essayist.”

When asked if she had always been a writer, McKetta claims that while growing up in Texas, she “scratched out poems,” but it wasn’t until her college years that she decided to follow the passion for writing.

During her time studying Literature at Harvard she joined a writing group, which inspired her so much that she stayed an extra year just so she could remain part of it. Her experience with this group, and college, brought about her dedication to the craft.

However, she claims to be a procrastinator at heart and says that it wasn’t until she became a mother that she found the discipline for writing as well as the ownership of being a writer. “I learned with a child that if I had 30 minutes to write, that I had to write in that 30 minutes.”

As McKetta discussed her influences, she said that during her formative years it was F. Scott Fitzgerald who left a big impression and later the novels of Jeanette Winterson. But the decision to write professionally came from Hope Hale Davis, McKetta’s first writing teacher. “I loved how her life held all the components I hoped mine might one day have: writing, teaching and family. She was my teacher for several years, from 1999 until she passed away at age 101 in 2004.”

Indeed McKetta’s life has all the components she’s hoped for, and now she can add her debut collection to the list. For many years McKetta has been compiling her poems and trying to find the right balance. When she placed the mammal/motherhood theme together, “this particular selection worked.”

“The Fairy Tales Mammals Tell” is available for purchase on McKetta’s website www.elisabethsharpmcketta.com or though the publisher, The Monkey Puzzle Press.

Nature is a Real Treat