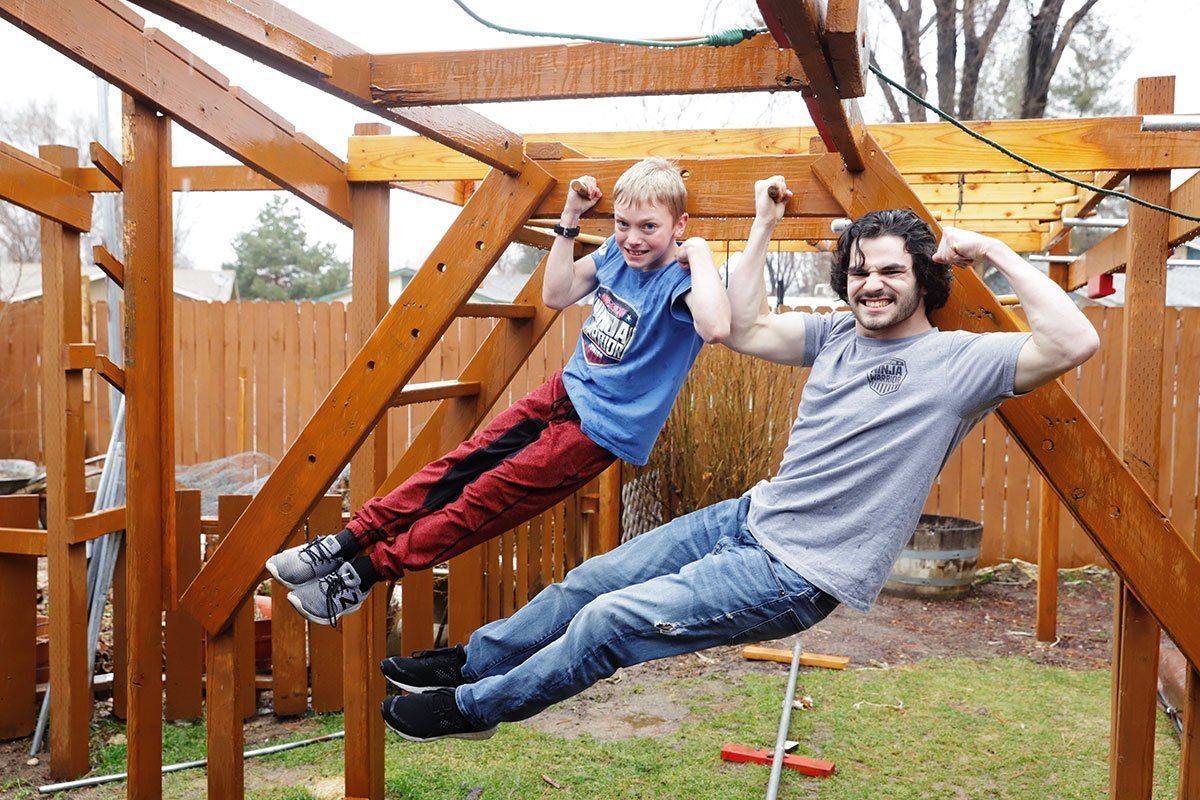 A ninja among us, on the rise to fame.
By Elle Parker Photos Kimberlee Miller

Everyone has had that moment when they’re watching someone incredibly talented on TV, whether they’re singing, dancing, or doing an obstacle course, that makes you stop and think: “Wow, I wish I could do that!” What so often seems a distant, unobtainable dream has become reality for Boise’s own 12-year-old Noah Willson, a competitor on American Ninja Warrior Junior.

From the looks of it, Noah Willson is just your normal sixth-grade boy. Even from the way he speaks so humble of himself, you’d never be able to tell that he’s the Treasure Valley’s most talented and esteemed young ninja. Since the age of 9, Noah Willson was always an avid fan of American Ninja Warrior. Always being a driven athlete and student, Willson decided his goal was to make it onto the show.  For his 10th birthday, his family built him a “salmon ladder” to practice on; this obstacle requires intense upper-body strength and is one of the infamously difficult parts of a typical ninja course. Over the past 2 years, the Willson family has built and kept a variety of obstacles that were created for him. After waiting for what seemed like forever since sending his audition video in, the producers informed the young ninja that he’d have the opportunity to participate on the show, a real life dream come true.

American Ninja Warrior Junior is exclusively for kids between the ages of 9 and 14, and the original show was initially only open to those 21 and older. Recently, the regulations have been altered. The minimum age requirement is 19, and Noah couldn’t be more excited to compete sooner than expected. He already trains alongside adults in Boise at Camp Rhino, a training facility that employs James Gomez, local ninja celebrity.

Brenda Willson, Noah’s mother, couldn’t help but gush about her son’s outstanding character and perseverance throughout the interview. “He’s so competitive but he cheers for everyone-” she told me. “-and when he sees that someone needs help, he helps them.” Not only is he supportive of his friends, but he pushes himself, too. Noah spends upwards of two hours practicing daily, and takes any free moment to perfect his skills. You’ll find him training nearly anytime he’s not at school. “The comradery and friendships are amazing,” Brenda Willson said. Noah affirmed this: “We’re really encouraging to each other.” The teen also shared with me that he is a part of several massive ninja group chats; they have daily competitions to keep each other committed to their sport. These challenges are meant to heighten the competition-for example, how many reps they can do on a particular obstacle in 30 seconds. Noah stayed humble, but his skills are far more developed than most of the ninjas his age. He’s even popular among adult participants. On one obstacle, Noah even helped an adult ninja by showing him his personal technique, which is just one of many grand feats of this Boise teen. Brenda Willson laughed, saying: “All the adult ninjas wanted to take pictures with him at the Regional National Ninja League qualifier hosted by the Movement Lab in San Dimas, California.

Noah has recently learned how to make it his own and channel his stress into skill for competitions. This twelve-year-old will soon be partaking in a major competition in Connecticut that will be livestreamed. After watching a handful of videos from the past few months, Noah’s improvements are obvious, and his mother agrees. It’s incredible to think of where he’ll be in a year! “Maybe one day you can interview him when he’s on American Ninja Warrior!” Brenda Willson told me. I hope she’s right.

The Sound of Local Music