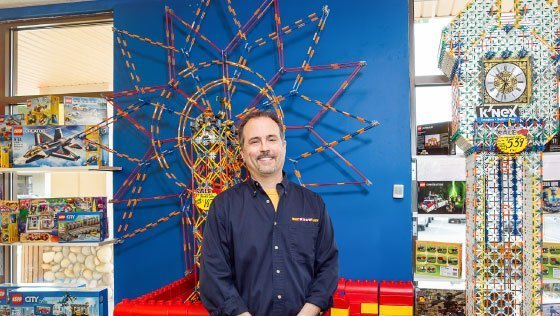 Step inside Eagle’s Bricknowlogy store and you are walking into what has to be nirvana for kids (and a lot of adults).

The store is candy for the eyes.  The walls are lined with Lego kits you didn’t even know existed from Star Wars to Scooby Doo; Pirates to princesses.

Tiny costumed figurines are everywhere—as are the colorful signature bricks in every shape, color and size.

There are even huge red, yellow and blue Lego bricks peppering the ceiling.

And smack dab in the center of the store?  A 10 foot island filled with 30 to 40 Lego kits built and on display for all to see.

But here’s the kicker.  The guy who created, built and lives and breathes this store is color blind.

All the bright and vivid bricks, toys and signs that make up Bricknowlogy are mostly grays, blacks and whites to owner Dean Barry.  But that color blindness doesn’t come close to dimming his obvious exuberance and passion for all things Lego.

“I have people come in here every day and spend an hour or two in the store, looking around and wanting to talk.  Many never buy anything and that’s okay”, said Barry.  “I want people to enjoy themselves and have a good experience.”

Some customers come in to the store just to gawk.  Sections of the store are a dedicated museum for Legos.  There are vintage, never opened sets dating back to the 1960’s.

Barry started Bricknowlogy in 2014.  He’s since moved into a new location (two doors down) and doubled the size of his store.

What is most impressive though is he has been selected and honored by Lego Headquarters to be one of their “Gold Standard” stores.

“It’s a pretty big deal, an exclusive club”, said Barry.  “There are stores that have been in business for years and years and they are still trying to get the Gold Standard.”

Typically, only two stores are given the honor each year and what an honor it is, especially for a store that has only been in business less than two years.

A team from Lego headquarters flew to Eagle and put in about twenty thousand dollars worth of upgrades, lighted signage, promotional material and display shelving into Bricknowlogy.

For a local start-up, that’s huge but not even the best part.  “I get first pick, priority on the new items that come out, items that they run out of pretty quick”, said Barry.  That means, Bricknowlogy carries a selection you can’t find in most other stores- here or around the country.

He also gets a hefty amount of free products to use for community events and charities.

There is no question, Barry pretty much eats, sleeps and even though color blind- dreams of colored bricks.

As if he’s not swimming in enough of the plastic bricks at work, he is currently being certified by the Guinness Book of World Records as the person who owns the most Legos.

His personal collection (none of it is in the store) is well over 6 thousand sets.

You can probably guess what he does to unwind after a long day at work.

Off to the Races

Standing Up Local Heroes in the City of Trees

Check out our Eagle, Idaho publication!