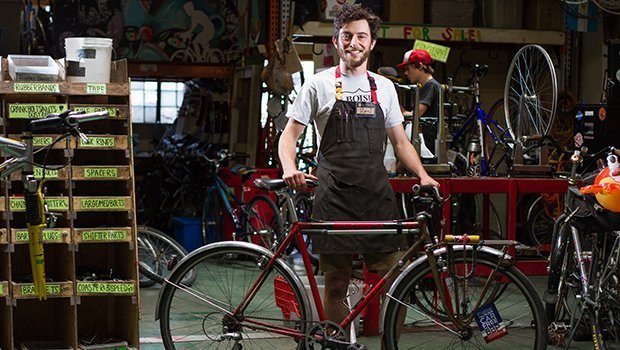 Why two wheels are better than four.

Boise’s bicycle culture is something to be admired. Between the 25-mile Greenbelt, the plethora of generous bike lanes on public roads, and the many cycle shops scattered throughout the area, the City of Trees is an optimal destination for every type of cyclist. There’s even been talk lately of turning Boise into the bicycle capitol of America.

This idea comes from the Boise Bicycle Project (BBP), a non-profit co-op that’s been fixing, selling, giving away bikes, and a whole lot more since 2007. Boise Bicycle Project Volunteer Coordinator Ryan King said that unlike many other cities, the conditions that exist naturally in Boise are favorable for cycling.

“The climate is pretty mild and the terrain is pretty flat,” King explains. “It’s a small enough city that the traffic volume isn’t too bad, even on the big roads. The lay of the land really makes it ideal for cycling.”

Even in the most favorable of conditions there are obstacles that cyclists must face, such as access to gear and safety concerns. Part of BBP’s goal is to help break down the barriers to cycling by offering affordable bikes and parts, safe riding classes, help with mapping out alternate routes for commuters, as well as repairs.

But don’t expect to walk into BBP headquarters on Lusk Street and wait around while your bike gets fixed. “We don’t do work on people’s bikes for them,” King explained. “It’s not a fee-for-service kind of model. We’re an educational workspace. We help people learn by setting them up with a mechanic.”

Empowering cyclists is central to BBP’s mission. As part of Idaho Gives on May 7, they launched #CarFreeForBBP and asked people to ride their bike for one trip they’d normally drive on.

“We wanted to create a critical mass of people riding that day and try to create a picture of what Boise would look like as that bicycle capital of America,” says King. “It’s always a big day for us and helps us raise awareness of what we’re doing. There’s a lot of recreational riding in Boise, and we need to build that connection to commuters and fulfill the potential for people riding bikes in Boise.”

King said if Boise is going to continue on its trajectory toward becoming a premier bicycling destination, bicycle transportation must be seen as a primary transportation method rather than an afterthought.

“A bicycle represents freedom,” he says. “The whole world opens up when you’re riding through and interacting with your environment instead of creating your own little bubble in your car.”

Even if you’re not on a bike, cyclists benefit the entire city. Fewer cars on the road decreases traffic for others, fighting frustrating congestion for those who can’t cycle places. For those who can pedal, there are social, physical, environmental, and emotional benefits.

“It’s sort of limitless,” King says. “There’s really nothing negative about it.”

Whether you’re wanting to get your first bike up and running, are ready to make the commitment to being car free, or fall anywhere in between, Boise is the perfect place to test your pedal power.