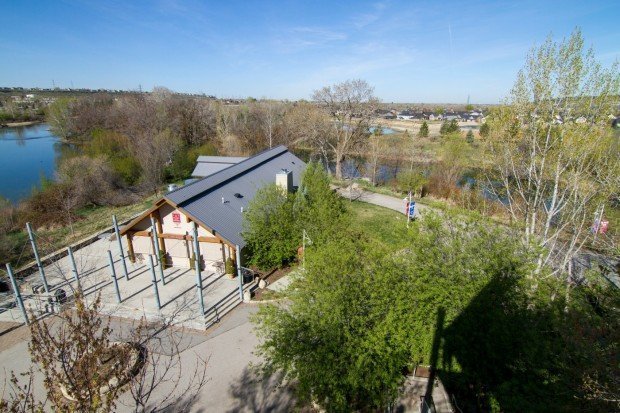 “It all starts with this day,” Boise Mayor Dave Bieter said as he announced an historic and vital land preservation effort at a press conference on March 7, 2014. “This is a win for the State of Idaho, for Parks and Recreation, and for the Shakespeare Festival.”

Nancy Merrill, Director of Idaho Parks and Recreation since 2009, agreed. “When you have the right people at the right place at the right time, good things can happen,” she said.

Bieter and Merrill were talking about the Idaho Foundation for Parks and Lands’ purchase of an option to buy the 12 acres of open space adjacent to Barber Pool and the Idaho Shakespeare Festival’s amphitheater, with the goal to raise public funds to complete the purchase the property by the end of 2014. The Foundation’s director, H. Larry Leasure of Boise, and its president, Don Wellmunster of Garden Valley, worked with stakeholders throughout Ada County to ensure that the open space near Barber Park would be preserved from development.

“Ada County and Commissioner Rick Yzaguire have provided ongoing support for this project,” said Leasure. “It’s thrilling when everyone can come together to the right conclusion.”

The foundation’s goal is to raise funds throughout 2014 so that the 12-acre parcel can be purchased and added to the 700-acre Barber Pool Conservation Area, a rich and bio-diverse riparian habitat. The foundation is actively seeking donations from the community, including Idaho Shakespeare Festival supporters, to achieve that important goal. More than $500,000 has already been raised since the purchase option announcement, with a goal of $1.25 million.

The Idaho Foundation for Parks and Lands was established in 1972 and has acquired most of its lands through private donations, often in the form of conservation easements. This arrangement allows landowners to retain their property rights while ensuring that the land will not be developed or subdivided. The foundation manages and preserves some lands and also makes land grants to public agencies.

John Sims, President of the Idaho Shakespeare Festival Board of Trustees, expressed his appreciation for the effort to preserve the land.  “Shakespeare has the wonderful location it has today because of Parks Foundation efforts,” he noted.

Shakespeare Festival advisory board member and author/producer Doug Copsey, who wrote a comprehensive book about the Idaho Shakespeare Festival and its history and who has also acted in past productions, applauded the deal as “yet another example of this community’s incredible support for the arts.”

That commitment to quality of life is one of the reasons that Boise consistently makes “Top Ten” lists in national publications. This summer, while you are enjoying Idaho’s premiere theater experience under the stars, consider making a donation to preserve the open space that surrounds the Shakespeare Festival.

Standing Up Local Heroes in the City of Trees