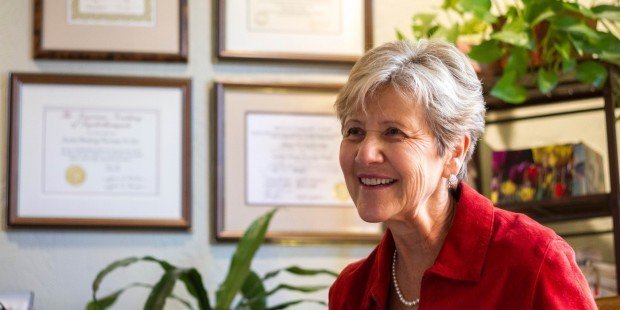 Sue Reuling-Furness helps people discover their authentic selves, one line at a time.

On a Wednesday morning, a circle of six women sit comfortably in a sun-filled room of a Victorian house on Jefferson Street, heads bent, writing instruments in hand. They are participants in a powerful form of expressive therapy called poetry therapy. Their guide, Registered Poetry Therapist Susan Reuling Furness, is a slender woman with a quiet voice and kind eyes. She reads the words of a Mary Oliver poem, and the women begin to write their truth.

“People come to poetry therapy on two paths,” Reuling Furness explained. “The first path is walked by writers who want to express themselves more creatively. The second is for people who want to use writing as a tool to help with depression, grief, or some other pain.”

Those paths converge at The Write Path, where Reuling Furness guides participants on a journey that is uniquely their own. “When we can say what’s true for us, we begin to heal,” she said.

Rueling Furness has practiced as a marriage and family therapist for several years. She discovered poetry therapy in the course of her experiences as a writer when she took a workshop with Joan Logghe, the poet laureate of Santa Fe, New Mexico, that focused on writing from the heart. Reuling Furness immediately connected that act of writing to what her clients experienced in therapy. She soon discovered the National Association of Poetry Therapists, where she took courses and eventually became a certified mentor/supervisor for The National Federation of Biblio/Poetry Therapy so that she could train other therapists in using poetry as a tool for healing.

Her very first poetry class was scheduled on September 11, 2001. All of the women came.

The Write Path’s group workshops explore everything from transitions to writing life stories. “The focus is positive,” Reuling Furness noted. “Positive psychology just makes so much sense to me. The neuroscience shows that we can train our brain to focus on hope, gratitude, wonder.”

She also has groups designed specifically for teens, and in January, she plans to offer the popular, goal-oriented “Write It Down, Make It Happen,” where participants explore their real goals and identify the barriers that prevent them from achieving what they want. And she plans to incorporate other media, especially photography, into future workshops.

“Everyone has a camera on their phone now,” she noted. “What if you spent each day taking a picture of something you had never noticed before, then writing about it? That could be a powerful tool for self-discovery.”

An award winning writer in her own right, Reuling Furness continues to use her own writing as a way to explore her life. “I don’t always have as much time for it as I would like,” she said. “But I know writing will always be there for me when I need it.”

Flowing On The Idaho Rivers Story

A World of Silence