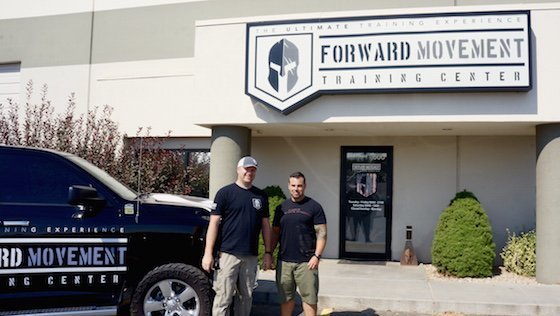 We’ve all heard the idiom “armed and dangerous” and what typically comes to mind is the image of a criminal recklessly holding a gun. How then, would a law-abiding citizen be described, should they ever be put in a situation where they had to use their gun defensively against another person? At Forward Movement Training Center, Matt Schneider and his team of experts aim to ensure gun owners are confidently armed and well-prepared for such a scenario.

Two years ago, Matt Schneider left a full- time career in law enforcement to start Forward Movement, a reality-based tactics and training center for defensive gun ownership. The facility, located near Downtown Meridian, is housed inside a 28,000 square foot warehouse and includes a classroom, simulator, and multiple structural models. Most of Matt’s customers are civilians who have either recently purchased a gun or have the desire to attach a self-defense plan to a gun they currently own.

“The vast majority of the people we work with all see the world as getting crazier, whether it’s due to increased awareness or an actual increase in violence,” said Matt. “For that reason, they’ve made a decision to purchase a gun for self-defense and we want to train them on the proper use of their weapon.”

Since July 1 of this year, most Idaho citizens are allowed to carry a concealed weapon within city limits without a permit. When asked what affect the new law had on his business, Matt relayed customer sentiments of both concern and excitement. Some clients attend the course out of a desire to defend themselves in an increasingly violent world. Others are taking the proactive step to become more knowledgeable about their weapon as a first-time gun owner.

The training center offers an impressive line-up of courses to test your ability to perform under extreme stress. Each course teaches the fundamentals of responsible gun ownership, confidence building through repetition and playback sessions, as well as the legal rights of a gun owner. Many people fail to consider the lengthy investigative process that follows a gun-related incident. Forward Movement teaches members how to act within the law at all times when operating a gun. Additionally, they focus on how to avoid becoming a victim of a misunderstanding. “Our scenarios will show a gun owner how easy it is for two ‘good guys’ to misjudge a situation and shoot each other,” said Matt. “Our simulator allows us to play armchair quarterback and assess how they could have reacted better.”

Pulling a weapon in public or your home comes with serious ramifications; without proper practice and principles committed to memory, the situation can quickly spin out of control. Forward Movement ensures members are prepared to confidently and calmly assess a situation for the need to use their weapon.

“You will always fall back on your lowest level of training,” Matt explained. “Unfortunately, many will mistakenly place their confidence in their gun and not in their ability.”

Fundamentals aren’t the only skills customers glean from their experience. Matt said that many enter the course with a sense of anxiety or uncertainty in their abilities. Upon completion of the course, members are astounded by their previous lack of knowledge and discover a newfound sense of confidence in operating their weapon.

All I Want for Christmas

The Unique Craft of a Specialized Artist