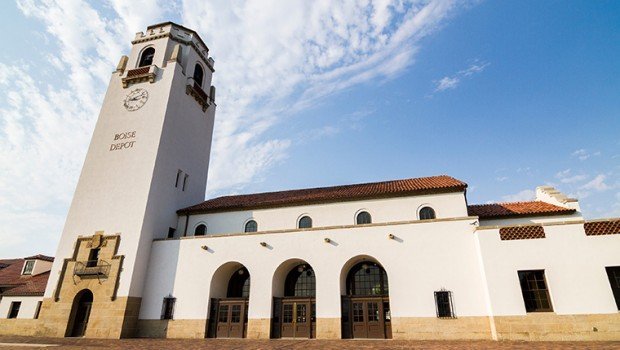 Despite no trains, this cultural landmark lives on

The first main line train arrival at the Boise Depot on April 16, 1925 was a sight to behold.  An impressive gathering of jubilant onlookers created an excitement and fanfare that was uniquely palpable, and hasn’t been seen since. The Idaho Daily Statesman reported that “Between fifteen and twenty thousand guests from almost every city in the northwest rejoiced with Idaho’s capital in her transformation from ‘the isolated capital’ to a city on the main line of a transcontinental railroad.”

Why such cause for celebration? Idaho city leaders began courting the Union Pacific railroad in the 1860’s for a passenger train, and it took over 30 years for that dream to come to fruition. In fact, one banner seen in a photo of the arrival of the first train read: “We have waited 40 years”.

By the time Boise was established in 1886, the closest railroad stop was in Kelton Utah—almost 240 miles and 40 hours away. Goods were brought by freight wagons and stage coaches. It’s no surprise then that city leaders were desperate for something closer.

The Boise Depot we know today was actually the third train depot built in Boise, although they were not all in the same spot. One of the first depots was some distance from town, and the rough road that lead to the depot made railroad travel difficult and unpopular.

Finally, as the Union Pacific railroad began construction on a line that would run through Boise, we responded by beginning construction on the Boise Depot on August 1, 1924. Carrere, Hastings, Shreve, and Lando, architects from New York, were contracted to design the building. They were inspired by the Mission Revival style, which drew inspiration from the Spanish missions in California.  Massive walls, unadorned surfaces, wide eaves, and low pitched clay tile roofs were a few prominent features of this style.  The depot has six arched entrances, a flood of natural light, and a stunning 96-foot tall bell tower.  Upon completion, the Boise Depot would be heralded as “the most beautiful structure of its kind in the west”, and would also become a steadfast Boise landmark.

The Boise depot is situated at the south end of Capital Boulevard, and offers a stunning panoramic view of the foothills—quite a sight for first time visitors as they pulled into Boise by train.

Across the nation, World War II brought about a revolution of ridership. In turn, the Boise Depot saw six passenger trains running daily through Boise by 1948.  But with the same flare of forward movement that built the railroads, new designs on transportation had begun.  The 1960’s brought about the completion of the interstate highway system, and with it a decline in national ridership of passenger trains.

The Depot has never become a forgotten treasure, however. It was purchased by Morrison Knudsen Co. in 1990, and restored to its original state. Today the depot is owned by the City of Boise and operated by Boise Parks and Recreation.  It is listed on the National register of historic places, and has been one of the more popular venues for weddings, meetings, and other special events.

Imagine if the walls of the Boise Depot could talk!  If it’s been a while since you’ve visited, stop by and celebrate this Boise cultural gem. The Boise Depot is open to visitors Sunday and Monday from 11 AM to 5 PM.