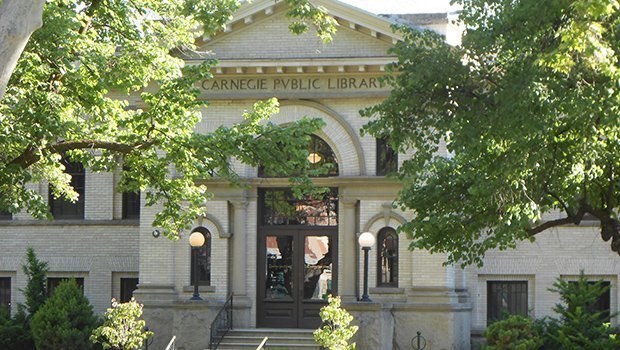 There are 120 candles on Boise Public Library’s birthday cake this year.

In 1895, the wealthy, prominent, prestigious, civic-minded women of Boise’s Columbian Club established a subscription library and free reading room on the second floor of City Hall. On opening day, February 18, 1895, the collection’s 700 volumes included novels by Mark Twain and Charles Dickens, the Encyclopedia Britannica and a dictionary. YMCA funding brought furniture used at the 1893 World’s Columbian Exposition in Chicago to Boise’s library.

In 1901, the Idaho State Legislature passed laws that let cities like Boise set up tax funded libraries. With funds solicited from philanthropist Andrew Carnegie by Columbian Club president Mary Black Ridenbaugh, a library was built on Washington between Eighth and Ninth. It was designed by J.E. Tourtellotte and his partner Charles F. Hummel, who also designed the state capitol and St. John’s Cathedral. The Carnegie Public Library opened on June 22, 1905, the first true public library in Boise.

With the growth of Boise’s population, the Carnegie Library was soon overcrowded. In May 1971, Ada County voters finally approved a proposal to buy and renovate an empty warehouse on Eighth Street–The Salt Lake Hardware Building. Marlene Hallauer, a circulation staff member, remembers being exhausted from moving books from the Carnegie Library but still shelving books and “hiding the messes the way you do when company comes” on opening day, April 27, 1973.   And they had plenty of company–all the television stations and many eager patrons.

Howard Olivier, a longtime library supporter, former Library Board member, and former owner of Flying Pie Pizzaria, was driving down 9th Street to the library in October 1994 and “while waiting for the light to change, I saw a brand new illuminated sign on the building, reading: LIBRARY. My thought was, ‘No – it’s a better library than that.’” A man of action, Olivier approached librarian Anne Abrams. “I told her that I thought it was a much better library than the sign might lead someone to expect. I suggested that we could improve it with an exclamation point.”

Considering the proud history and all the hard work and community support that have contributed to the Boise Public Library, those exclamation points are appropriate.

The Most Magical Place

Traction mastery for your business with Zen Fox Strategies