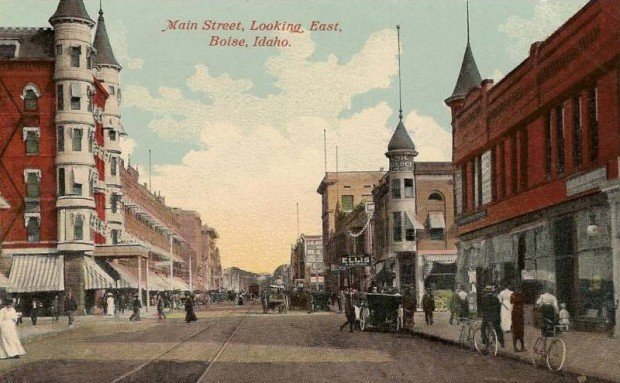 On Christmas Eve of 1864 Boise City become the capital of the Idaho Territory and the city celebrated in styl.

The frontier town of Boise City was only a year-and-a-half old when it celebrated its second Christmas season in 1864. The gold rush, the Oregon Trail, and the protection of Fort Boise had already brought many settlers to the area, growing the city to a robust 1,658 residents. And on Christmas Eve of that year, legislators in Lewiston gave this booming frontier town the best gift it could possibly receive: the passing of a bill making Boise the capital of the Idaho Territory.

Christmas Day was rung in quietly that year. On Christmas morning an Episcopal Priest conducted services in the local schoolhouse, as there was still no church in Boise. But despite lacking a house of worship, the men and women who now wore the title of Pioneer did their very best to make the western frontier seem more like the homes they left behind.

A heavy snowfall that year blanketed the basin. The roads were impassable without runners on stagecoaches. But the heavy snow and biting cold didn’t stop the holiday revelry, and sleigh bells could be heard as people turned out for the season’s festivities.

But it wasn’t just good music that was in attendance at the Christmas Ball, it was Boise’s most respectable families as well. Meaning that precautions against the rowdy element must be taken. After all, this was the frontier; and winter brought the uncouth and uncivilized miners and mountain men into the valley to wait out the winter. Gambling, drunkenness, guns and brothels were the backdrop of this picturesque Western town, and those organizing the ball knew that an open invitation could easily spell disaster.

No respectable man wanted to put his wife or sweetheart in dangerous. So, to quell the nerves of this budding society set, the advertisement included the floor managers names – what we would consider bouncers today – and it was noted that, “good order will be preserved.”

As the sun set over the snowy basin of Boise City, couples dressed in their finest fashions descended on the Overland House. Partygoers crowded together for a traditional midnight meal and merriment, and then danced the night away until the dusky hues of dawn appeared.

It was truly a magical evening. As James Reynolds, publisher of the Idaho Tri-Weekly Statesman, wrote: “The Christmas ball at the Overland House on Monday night eclipsed anything of the kind ever had in Boise City. Most perfect good order prevailed through the whole night. A driving storm of mixed rain and snow did not keep the hall from being crowded to its utmost…Never were ladies more lovely and gay nor the gentlemen more gallant, and when daylight reminded them too soon that the merry hours had flown, all joined in the wish that they might see many another such merry Christmas.”
Thank you to Boise Public Library for the research assistance provided in this article.