A conversation with Barbara Perry Bauer is as curiosity provoking and satisfying as a visit to a natural wonder. She makes you want to know more and to understand how Idaho came to be.

Barbara has an astounding memory for dates, times, places, names and, well, her favorite topic—old things. Call her a history nerd, and you just made her day.

She and her sister, Elizabeth Jacox, are the owners of TAG Historical Research and Consulting, a company that does just what the name says. Their service offerings are broad: historic site surveys and assessments for national historic registration nominations, documentation of sites before planning and construction begins, museum exhibits, interpretive signs, artifact collection management, tours tailored just for your organization and house and neighborhood histories.

Want to read about agricultural silos? Barbara wrote a blog for her website that answers your questions. Want to read about Treasure Valley’s railways or legendary locals in history? Barbara and Elizabeth are book authors too. Want to learn why canals and irrigation ditches shaped the treasure valley? Barbara can explain the context and why this development was so important to forming what eventually became modern life in the valley.

“Especially with all the new residents moving to Idaho, we want people to understand the special things about Idaho and its history,” says Barbara. “For me, it isn’t that the work we do is earth shattering. Our work reflects on the everyday lives of our community, both past and present.”

People mistakenly think that today’s historians sit at a computer all day. “We rarely sit at a computer,” laughs Barbara. She describes wearing boots and tramping along irrigation canals in fields, walking cemeteries, visiting old mine sites, spending time in libraries to find old newspapers, searching archives and records in civic buildings and consulting on set with public television. “We are historians with blisters,” she laughs.

To do their jobs, Barbara and Elizabeth team with such professionals as archeologists, engineers, attorneys, developers, realtors and local, state, and federal government officials. Barbara modestly states that while they have been successful because they have a strong background in state history (Elizabeth was the state photo archivist for 14 years) and have worked with some of Idaho’s premiere historians, and there are other historical research companies that also do this work. 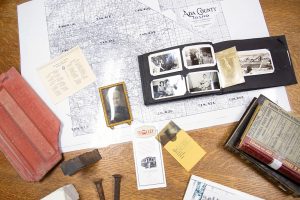 Listening to Barbara passionately describe her life’s work, reminds one that maybe parents should not be so quick to dissuade their children from a college major in history.

Saying that she will always work as an historian, sharing her passion, rather than retire, she refers to her work as a jig saw puzzle with a missing piece, she says, “The story is never done. In our work, there is always a new revelation, new evidence, a new source that changes the path of understanding.”

The Art Behind The Story

Living on the Greenbelt