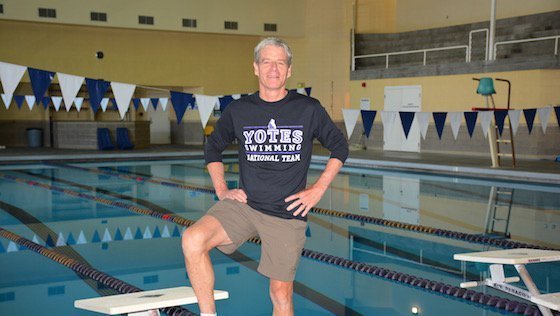 Jim Everette is a Familiar Face in the Pool

A what’s-old-is-new-again career move for Jim Everett gives swimmers at The College of Idaho a uniquely qualified coach and lets the rest of the Treasure Valley see how a well-known Encourager in Chief generalist adapts proven methods for a narrower constituency.

As CEO of Treasure Valley Family YMCA from May 1987 to his retirement last December, he became the face of the organization’s live-healthy, strengthen-the-community mission. He started his career as a YMCA youth swim coach in Ohio after earning an education degree in 1974 from Albion (Mich.) College, where he starred on the swim team. With the Y, he moved to southwest Idaho as a coach and then launched his administrative career in Michigan before returning to Idaho.

Everett’s contagious optimism, quiet discipline, and ability to put people in roles that suit them helped staff, volunteers, and supporters grow Treasure Valley YMCA infrastructure and programs. At C of I, where he leads about 32 men and women on the swim team plus staff, he won’t change his approach much.

“I really look at my job as a life coach,” he said.

Everett wants to build on C of I swimmers’ recent successes while helping them grow as individuals and teammates. “Developing good human beings is by far the top priority here.”

A lifelong learner who sees great things ahead for youth, he enjoys working with younger people. Recently that includes swim team athletes and staff, and administrators at the Caldwell liberal arts college. He has served on the school’s board of trustees and was instrumental in the Treasure Valley YMCA raising money for a Caldwell swim and recreation center.

“So much can be learned from young people with a fresh perspective,” Everett said. “We continue to raise better generations.” He credits young people for society-benefitting advancements from technological and medical innovations to a fresh enthusiasm for social justice. He retains optimism, steers clear of cynicism, and lives “in a place where the sooner we can hand off the keys to the next generation, the better off we are going to be.”

He enjoys the opportunity to influence a smaller group more deeply. Among his coaching goals, he said, is to “inspire, motivate, and empower” swimmers so they can apply current lessons learned to future endeavors.

Everett’s rules to live by for team members include staying disciplined, strong, and focused in the classroom and in swim practice; striving to improve in your favorite events to grow as an individual and in your least favorites to help the team; and staying positive.

He grew up in a Detroit suburb. When he was 8, his father died. “I had a wonderful mom, but teachers and coaches were significant influences,” he said. He benefited from coaching styles ranging from an “everyone plays” approach that celebrates participation to a tough-love, expectations-driven model that can help proven athletes accomplish more.

“I needed some extra help, and I got it time and time again— especially the year after my dad died,” Everett said.

Handmade Knives that Chop with Charm

A Wine for All Seasons